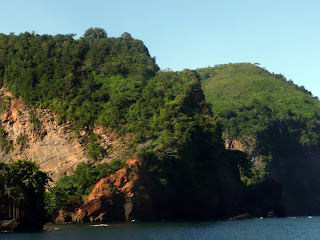 The dawn found us 8 miles off Venezuela with Trinidad ahead in the distance. We could see the coast of Venezuela all night after leaving the Testigos. There were very few lights on shore in this area but many boats. The main activity of our watches was keeping track of other boats. 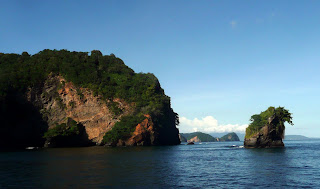 Our radar makes this reasonably easy. None came very close. The view is beautiful as you approach Trinidad. A series of island stretch south from the mainland and form three gulf entrances between it and Venezuela. 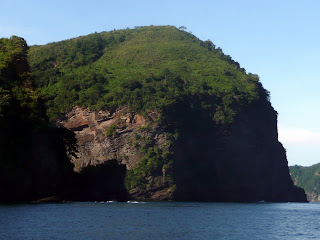 We took the last, the Moro, and these pictures show the rugged deserted coastline. Further inside vacation homes start to appear on the islands. On the mainland this area is part of the Chagaramus National Park and undeveloped until you get near the bay. This was an important U.S. Military Base during WWII and many of the buildings are still standing from that time, although empty now. 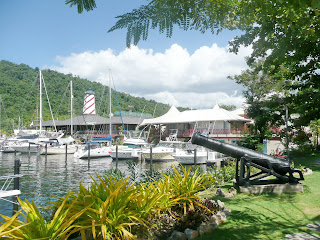 It's been over three years since we've been here. We spent four months over the summer of 2006 here during the hurricane season. We stayed at Crew's Inn Marina that summer and hoped to get a berth there again. Russ was salivating at the thought of the large swimming pool for laps in the morning. 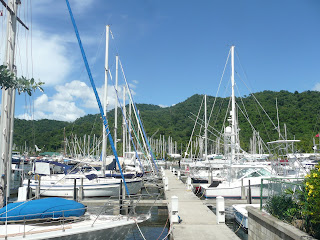 The large harbor was packed with big cargo ships, oil rigs, and cruising vessels. We passed them all and proceeded down to the end and tied up to the Customs Dock. After hours of waiting in line at Immigration, Customs and filling out form after form, it was a relief to find out there was room in the Marina. After getting all snugged in there we were all ready for food and cold drinks. That's "Scott Free" at the dock in the picture of the left, the second boat on the left. 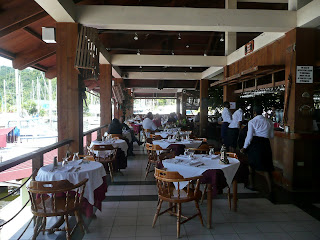 The cook rebelled at the thought of working down in the very hot galley so happily the lovely Lighthouse restaurant was close by. "Three specials of the day please" was the cry. Big pieces of fish, provisions au gratin and salad, plus of course a few beers, made this crew very happy. That's the restaurant under the lighthouse and the interior shown here.
We plan to stay at Crew's Inn until Thursday Nov. 19 when we will be hauled out in one of the boatyards. Russ will fly home this Friday morning and we'll follow him a week from Saturday.
Posted by Scott Garren and Heather Shay at 6:03 PM

Email ThisBlogThis!Share to TwitterShare to FacebookShare to Pinterest
Labels: Trinidad