From Daytona to Marathon with Russ

Russ Wolf joined us in Daytona Beach for a 2 week cruise. The plan originally was to go to Mexico with us but he happily adjusted to our new destination in the Keys. He has a home in Duck Key and always enjoys a visit there. For the last half of the second week the three of us moved into these luxurious land quarters.
And of course, he's a doctor - very comforting for Heather, recovering from surgery. Really he's so much fun she forgot her aches and pains.
We had a long first day down to Coco where we anchored off the town just before sunset. There was a stiff breeze making it really cold for the person at the wheel. We used all our blankets that night!
It was sunny the next day and felt warmer. The harbor at Vero Beach is tucked way down a long channel and is filled with moorings.


We arrived in time to take a long walk down to the beach. Our outboard has been defunct unfortunately so Russ and Scott had to paddle their way back and forth to the dock!
Next day we had a short trip to Ft. Pierce, FL. Our great friends Diane and Mitch Korbey live there and we enjoyed several days visiting them. We stayed at the very friendly Harbortown Marina on the west side of the ICW. They had courtesy bikes which Russ and I used both days to ride to the beautiful beach. We had dinner the first night at the marina's restaurant and the next at Mitch & Diane's.
Russ is the alter ego of the Energizer Bunny and not only bicycled but swam 1000 strokes every day!
He particularly enjoyed a very early morning swim with Mitch.
Meanwhile Scott got our outboard motor repaired nearby and repaired the toilet and the wind generator. There's always something - poor guy! 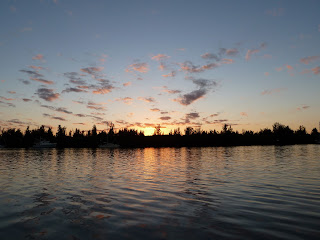 It was another long trip to our anchorage in the north end of Lake Worth. We arrived just as the sun was setting and had a quiet evening.
That day was nothing compared to the next. Never again will we take the ICW from Palm Beach to Ft. Lauderdale!!! There were more than 20 opening bridges, all with different schedules. It was a nightmare and took us 10 and a half hours. The last bridge was on the narrow crowded New River and involved tight maneuvering with strong currents and commercial traffic waiting almost a half hour for it to open.
We passed under the bridge to a fabulous horn solo from Gene, Diane and Mitch's friend who with his wife Shirley live in a condo nearby. A triumphant entry indeed. And then as we tied up, our friends Larry and Leslie on Algonquin ran up. They were moored right across the canal and heard us on the VHF. We hadn't seen them for years but have known them since our first SSCA Gam in Maine our first year cruising. We made plans to see them the next day for breakfast.
Poor Tony Gonzalez! We had made plans to spend the evening with him and told him to meet us around 3 PM. He had to return home and come back again at 6:30PM. We did have a fun evening with him though eating at a great burger joint on Los Olos Blvd.
The next day we met Leslie and Larry at our favorite breakfast place on Los Olos, The Floridian Cafe, a piece of old Florida (or at least fifties Florida). Then we toured their new (to them) trawler - beautifully restored and redecorated! When we first met them they were on a sail boat but they sold their house in northern N.Y. and this is their home now.After that Scott went with them to the Miami Boat Show and Russ and I walked down to the beach. It was packed with sun worshipers but unfortunately for Russ, a flag was up warning potential swimmers of Portuguese Man of Wars in the water. He decided against risking it. From then on we saw these weird creatures in the water in big numbers. Several times while sailing south turtles appeared to be nosing up to them. We heard later that they eat them! GO turtles!

We exited the channel out to the open ocean for the first time on this trip and sailed (not motored or even motor sailed) down to Miami and Key Biscayne. The channel into the Bay behind the Key was very shallow and we had some nervous moments negotiating it. But the anchorage was very pleasant and calm. Russ and Scott took the dinghy over to a sand bar and joined the young crowd swimming and partying there.
The next day we took the Florida Channel out of the bay and sailed again down to Rodriequez Key where we anchored well off. Some windy weather was coming in during the night and we didn't want to bounce on the bottom and even thought we might want to make a quick exit if it was too rough. Happily though we didn't have a problem and again had a lovely sail down to Boot Key Harbor in the town of Marathon, Florida. Our last stop for a while.

Posted by Scott Garren and Heather Shay at 8:27 AM 0 comments

Email ThisBlogThis!Share to TwitterShare to FacebookShare to Pinterest
Labels: Florida

As I result of my operation in early January (see later blog entry) we didn't get back to Scott Free until 2/3 (a month late) and our plans for this year had changed. Instead of Mexico, Belize and Guatemala it was Florida and the Bahamas. All sunny and warm destinations - but not yet! It was cold and wet in Brunswick, Georgia and our rebuilt transmission was still not installed. But in only 3 days we were on our way again and everything appeared to be working. But it was cold and blustery in the cockpit. Both of us needed to be focused and watching the markers and charts, both electronic and paper. Our strip map of the inter coastal waterway was covered with notes on shallow sections and iffy bridges. We looked like we were about to hit the ski slopes with down jackets, hats, and gloves. In the rain these got covered with rain jackets. We did long days trying to get south to that promised Florida sunshine.
We anchored for one night at Cumberland Island, a lovely spot we'd stayed at before. Really bad rainy weather was predicted for the next day so we decided to pull in just over the Florida border in Fernandina Beach at the Marina. This is an historic well preserved town and we were delighted to make it's acquaintance!
As it was not far from Cumberland we were able to take a long walk when we arrived. It was several miles over to the ocean and just as long coming back but a pretty trip. And it was sunny and almost warm! That night we had a big treat. It was the Superbowl and the marina lounge had a big screen TV. We had a great night cheering both teams and a fabulous game in the company of several other cruisers (and lots of munchies & drinks).

The next morning brought pouring rain and gusty winds. For a while we were nervously fussing with our mooring lines as the building waves pushed us against the dock, but the storm didn't last long.
We had a great piece of news however! Our friends Alan and Jeanette Feuer had just returned from a cruise through the Panama Canal and were in Ft. Lauderdale, FL. They gave us a call and a few minutes later we had guests arriving that afternoon. Joy! They were a great tonic to me and my aches and pains were eased away.
Alan and Jeanette bought the beautiful 4 suite Anne's Point Inn located on a peninsula overlooking Bass Harbor near Arcadia National Park. Check out TripAdvisor.com for details - they get incredible reviews. They were neighbors of ours in Brookline and good friends for years. Unfortunately they had their car with them but we worked out a fun arrangement. On the first day Jeanette came with Scott and I (and Alan drove) to Jacksonville Beach, FL and the next day Jeanette and I took the car and Alan went with Scott to Daytona Beach.
Jeanette and I had a long trip ahead. Our great friend and crew a year ago for two weeks off Venezuela, Russ Wolf, was flying in to Orlando for two more weeks with us. After doing a lot of laundry we managed to get to the airport on time. And we got to the Daytona City Marina just as Scott Free pulled in. Our crew change was accomplished quickly as the Feuers needed to get up to St. Simon's Island that evening. Great visit!
Posted by Scott Garren and Heather Shay at 4:31 PM 0 comments