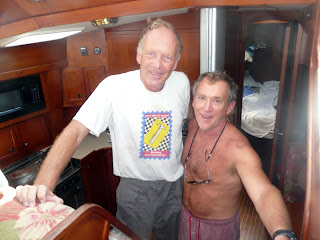 Our weather guru, Chris Parker, was signaling some possible changes in the weather patterns so we decided to get some more mile east under our belt. We left Blanquilla at 4 PM Friday hoping to pass between the looming rocks of Los Hermanos before it became dark. 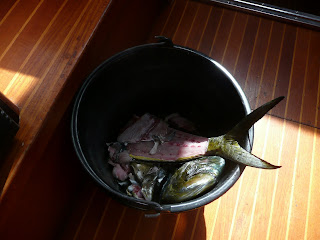 We made very good time but with a negative current the sun was down and the sky black before we had cleared the rocks. A number of fishing boats were working near the cliffs confusing the situation further. All three of us were needed to keep track of the traffic for a half hour but soon we were chugging along under a starry sky and calmer seas than our last passage. 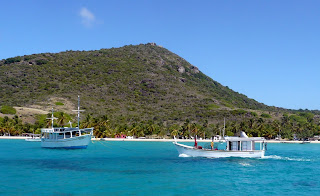 We saw only one boat on the trip, our good friends Brenda and John on "Willow". They had been delayed in Trinidad due to repairs and we had a schedule as Russ needed to be in Trinidad for his flight home - so we missed each other so closely. As Brenda said later, "We could have passed the Grey Poupon!" 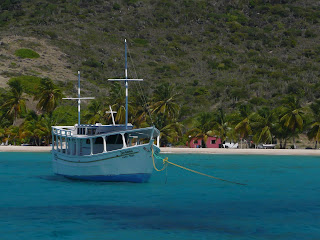 Los Testigos (The Witnesses) can be seen from quite a ways away. They are all hilly with the highest peak 807 feet. Somewhere under 200 inhabitants make there living from the sea. They build many of their boats and they are unusually charming and well maintained. 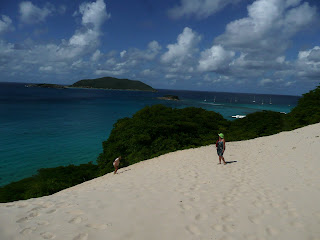 Across the way from our anchorage is the main village with a small school and church. Several colorful homes lined the beach near us.
On the way into the channel Scott caught a MahiMahi , a beautiful and very tasty fish. We had intended to anchor at Playa Real, a place we had enjoyed last time here, but a dinghy raced up to meet us with Manuela on "Paradise" aboard. 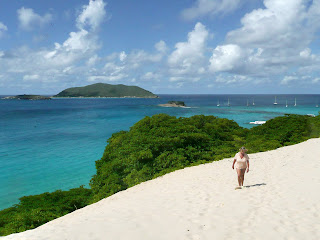 She informed us that it was very rolly and advised us to anchor instead at Isla Langoleta near them. It was good advice and soon we were tucked in.
One man came out in his pirogue with a card offering meals at his home, the "Green House". 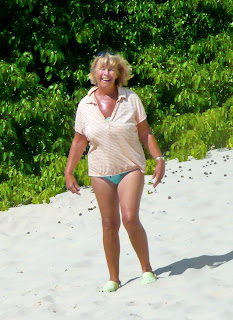 We were sorry not to take advantage of this opportunity to meet some locals but our just caught fish was too tempting. Russ and Scott cleaned and filleted it in my galley - and then cleaned up. There are some things this cook refuses to do! That's the remains shown here. 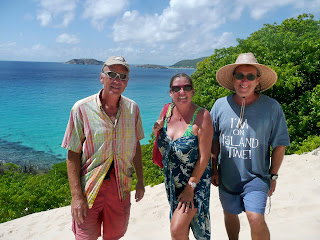 Sorry I didn't get a picture of it before!
Manuela stopped by again so we invited her and Sid over for drinks later. Meanwhile it was time for a long delayed big breakfast, now almost lunch. It is a tradition for us to really chow down after an overnight passage. This means omelets with veggies and Canadian Bacon with fresh hot ciabatta bread. 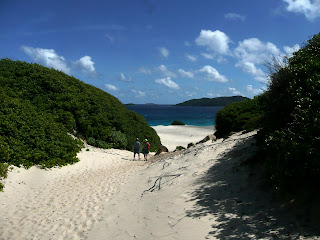 After lunch we snorkeled over to and around the island. A reef stretches between it and the main island Testigo Grande. It was some of the best snorkeling we've ever seen, lots of fish and beautiful coral. This activity was followed by another tradition after an overnight - naps! 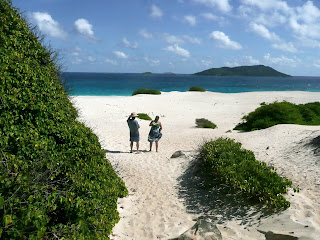 Manuela and Sid brought a great appetizer of spiced tuna and we had various cheese & crackers and of course, rum punch, a specialty of mine. It's hard to believe but even after all that we had a great dinner of Mahi Mahi and beans & rice. We slept really well.
The next day we joined Manuela for a trip over the dunes to Playa Gozman on the windward side of Testigo Grande. The first dune is a BIG one as the several pictures here above show. We had to zig zag up sliding down some with each step. In the distance you can see our boat at anchor. On the other side the waves provided lots of fun for us all. 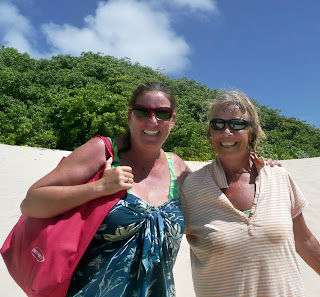 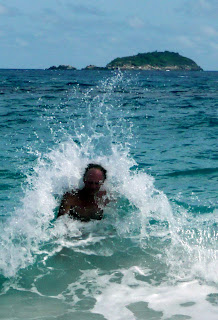 It was a lovely morning but the weather was starting to change in the days ahead so we decided to press on to Trinidad that night. It was hard to calibrate the time for the 99 mile passage as the currents can vary from one half a knot to two and a half knots against you. In addition we didn't want to reach a point 5 miles off Trinidad before good light. There is a lot of traffic in this area, big tankers and fisherman. 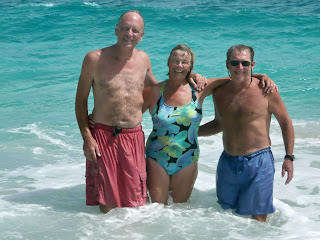 We left at 2 PM, prepared to slow down if the current wasn't too bad. It is important to have good light conditions leaving the Testigos as fish buoys dot the area up to 10 miles out. We kept a careful watch. The seas were the lowest we'd seen on the trip and the wind never got above 14 knots and was often much less. The moon rose later each night but happily we had a clear night. The many lights of other boats were fairly easy to track and it was the best night passage of the trip.
Posted by Scott Garren and Heather Shay at 10:13 AM