A Hike in the Park, Acadia National Park that is! 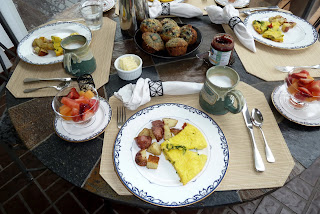 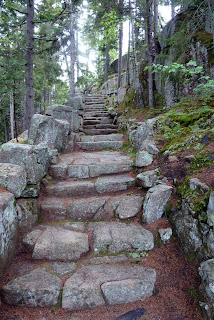 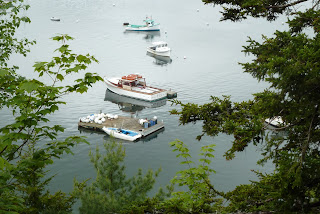 After another beautiful and enormous breakfast and despite the occasional sprinkle, we decided to take a hike. Alan recommended the walk from Thuya Gardens to Jordan Pond, about 3.5 miles, and could join us. Knowing my love of flowers, we could not only see Thuya but the Asticou Azalea Gardens afterwards. Jeanette declined as she had lots of work at the Inn getting ready for the paying guests the next day, but would meet us at Jordan Pond House for lunch and drive us back to our car. 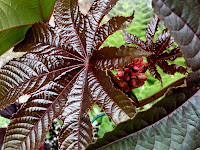 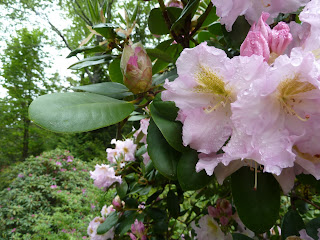 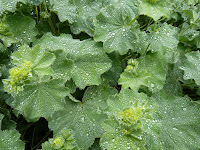 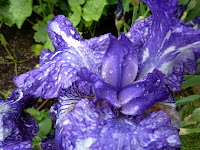 Both gardens are along the edge of Northeast Harbor. Scott and I have had wonderful times there sailing with our friends Bob and Lesa from North Conway. They kept their boat on a mooring there for many years. The walk starts down by the road and zig zags up the slope on beautiful granite steps and paths. You can view the harbor through the trees from various angles. This was the home of Joseph Henry Curtis who gave it to the town in 1928 at his death. Thuya is named after the northern white cedar, thuya occidentalis in Latin.
Both gardens were designed and built by Charles K. Savage with financial help from John D. Rockefeller. He was able to save the plant collection of Beatrix Farrand when her Reef Pt. Estate was sold. Now they are owned and maintained by the Mount Desert Land and Garden Preserve (http://www.gardenpreserve.org). 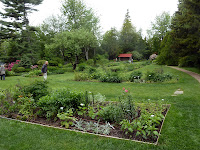 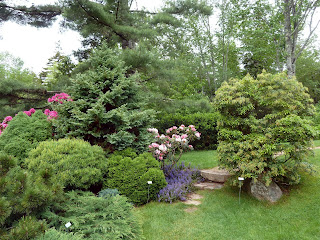 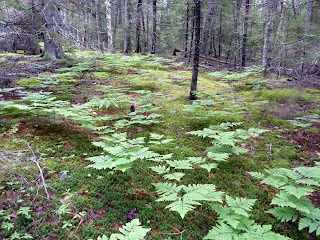 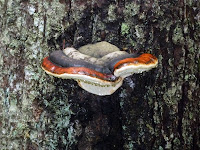 The Thuya garden was formerly an orchard and is behind Thuya Lodge. Both are open every day during the summer season. Formal flower beds alternate with the walls of rhododendrums and azalea. We were really lucky to be here in June when they are in full flower. There was also a huge selection of dahlias and peonies. From there we exited through a gate to several trails leading to the Jordan Pond Trail. Excellent signs at every cross path make getting lost pretty impossible. There are a huge number of trails throughout Acadia National Park of many difficulty levels. This was easy; just gradual ups and downs. The forest itself was very green and cool with carpets of ferns. 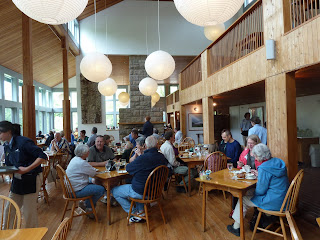 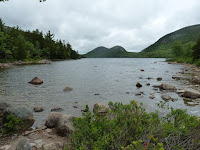 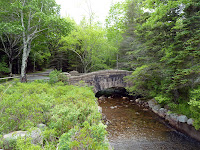 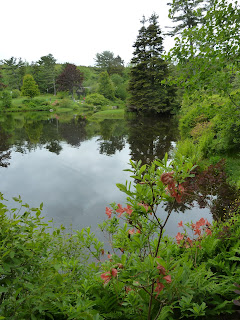 Our destination was Jordan Pond, a pristine clear body of water in the middle of the island. We had lunch at the Jordan Pond House , built in the 1870's as a tea house serving a specialty of popovers. It was donated to the park by John D. again and when the building burnt down in 1979 it was rebuilt with private donations. It's a big restaurant high on a sloping green lawn with an interior of light pine, big stone fireplaces and floor to ceiling windows over looking the pond. Generally it is possible to eat outside but it still threatened rain so we ate sitting near one of the windows inside. Jeanette joined us not long after we arrived.
Our food was very good but not cheap. We had bowls of lobster stew with 2 hot popovers for $20. Both were excellent. There was quite a bit of lobster in my stew and the popovers, hot and served with butter and jam were marvelous. I'm resolved to try to make them at home - never tried it before although I did make Yorkshire pudding a few times and that is very similar. 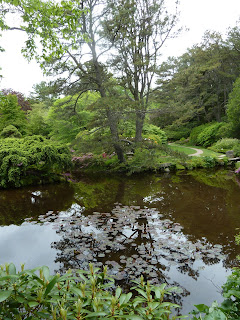 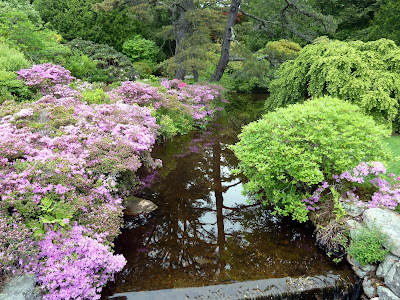 Jeanette and I stopped at Asticou Gardens afterwards. This is modeled after a Japanese Stroll garden and since I've never been to Japan, this was my first example. I loved it. The paths lead you to different views of the pond and flowers. It's like walking through an art museum and seeing the pictures, except here the pictures are live! Sometimes you feel you're entering rooms with walls of flowers, mainly rhododendrums and azaleas. A small stream artfully flows in and out of these rooms before entering the lake.

We had such a wonderful time visiting Maine it was hard to pack up the next morning and leave. The only bad part about coming here, is coming here. "You can't get there from here" is true in this case. Roads in northern New England go north/south, not east/west. Rt. 2 is an exception but it is a 2 lane road going through every hamlet and town between Bangor, ME and Burlington, VT. We came that way and it took 7.5 hours. We went home via the highways 95 to 89, driving all the way down past Portsmouth, N.H. and it took 7.5 hours. Ah well, like childbirth, the memory of the pain goes away and we remember only the beauty and hospitality of this lovely place.
Posted by Scott Garren and Heather Shay at 9:38 AM 1 comments

A weekend in the country...Ann's Point Inn, Bass Harbor, ME


Those of you following my blog may remember our friends Alan and Jeanette's visit on Scott Free in February. They joined us in Jacksonville Beach and motored down the ICW to Daytona with us.
They own an inn in Bass Harbor, ME and invited us and a few other friends to open up their season with them. What a great idea!
This is an amazingly beautiful place at the end of a peninsula surrounded by this pretty harbor. We were only a few minites from Southwest Harbor and Northeast Harbor. Bar Harbor was 11 miles away.


They are all on Mt. Desert Island and Acadia National Park takes up a good deal of it. This is the smallest of national parks but it packs a lot of beauty and activities in this little area.  I spent a lot of time here in my youth on my Uncle and Aunt's boat on these waters. We've taken Scott Free up close to here twice years ago (see our old blog entries on Maine).
As you can see from the pictures, this is a special place (four star AAA). They even have an indoor pool and sauna. There are only four rooms, really suites, so it feels like you are visiting a home - well, actually we were! We stayed in the Blue Heron Room with a living area, gas fireplace, king sized sleigh bed and a private terrace (and a double shower, a real treat for us cruisers).
Jeanette makes incredible breakfasts and Alan

serves wine and cheese every day at 5PM. We tried a wonderful dry blueberry wine from a local vineyard.
(http://www.bartlettwinery.com/ )
We brought a group of cheeses from Vermont with us and the combination was terrific.
Scott and I haven't been cosseted like this - well, maybe never. We tend to stay in hostels! So this was a big luxurious occasion for sure.

They have a table for any weather at breakfast. Our favorites were outside on the deck or inside the sun room, although the kitchen is lovely too - oh these difficult decisions. Did I mention that Alan makes cappuccinos on the espresso machine in the mornings?
If you want to experience this yourself, just check out their website at http://www.annspoint.com/
Posted by Scott Garren and Heather Shay at 9:54 AM 0 comments