East Boston was a fun place to keep our boat. The marina had a beautiful view of the city skyline across the harbor. That's Scott Free in her slip and the view at sunset. Scott and I walked all over the city and the nearby towns of Winthrop and Charleston. We hauled the boat for the winter after showing it off to most of our friends. Of course our son Josh, Michal and Daniel came over several times too. 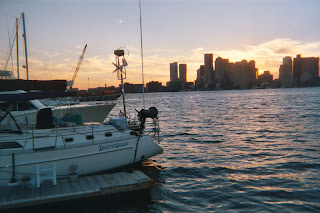 That's our oldest grandson Daniel with me at the wheel below. Almost everyone we know came by for lunch or dinner and several times we took her out for a day sail. We went up to Glochester for a few days in October and Colin Smith and Matt Bagnell joined us on the trip back. Poor Colin, he was at the wheel when our captain's chair gave way! Happily he wasn't hurt. 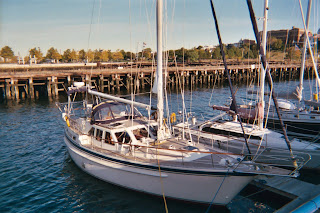 In the spring we sailed up to Marblehead with Brent & Wilma for a night.
During the fall and spring our guest log shows that we hosted, besides our own family and those I've mentioned elsewhere in this posting, the Eltons, Bagnells, Victoria Arnold & Bert Waters, Fonvielles, Osbornes, Martha Patz, Pam Pinsky, Feuers, Sam Rust from Dartmouth, Kelleys, Grossmans, Herberts, Martins, David Wood, Bob DeFeyter (spent two days working on the boat with us), Korbeys, John Moore & Jane Mahoney and Dick & Heidi Bomagen (dinner for Mitch's 70th birthday), Susan Weir, Judith & Alan White, and the Silversteins. 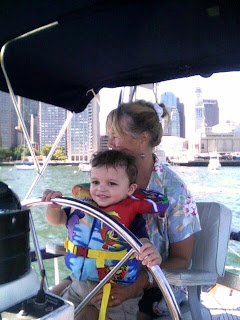 James spent over two weeks with us during the break between Marlboro and Middlebury in June. We went up to Marblehead for one night. Sean joined us near the end of that time between Dartmouth and work in N.Y.C. too.
One day sail stand out in our memory. Russ & Marty Wolf and Dick & Debra Bond joined us in the morning of September 21st. That's Debby with me below and Russ beyond at the bow. To be honest Scott and I were really nervous taking her out of the slip. "Scott Free" looks so big and is very heavy. If we'd hit the dock, there'd be a big hole...in the dock. 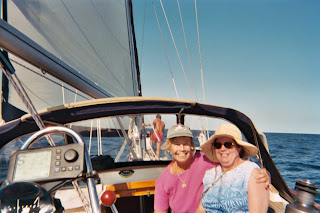 We took turns at first steering the boat in close quarters but it soon appeared obvious to us that the combination of my being at the wheel and Scott on the deck and dock worked best for us. This is a very rare decision among cruising couples it seems. We should say at the start that we talked over who was Captain of our boat - and I felt that only one person should be and that was Scott. He is the cooler head for sure and is much more knowledgeable about the boat and sailing. He makes the final decisions - sometimes after I argue forcefully. 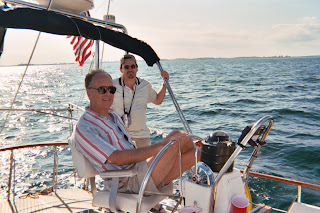 Our fears on this occasion however turned out to be grounded, literally, as we hit a rock off the channel heading out of the harbor. The boat stopped dead in the water. I was below getting drinks and Russ had taken the wheel. Scott was busy with some task and didn't notice when the boat strayed out of the channel. The markers at this point are very tricky and confusing. Happily our Nauticat is a tough cookie and the only damage was a scrape on the bottom. We were able to back off. 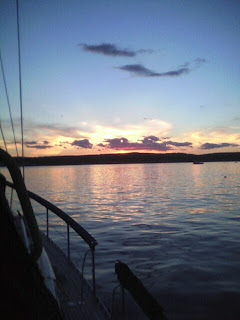 We learned a lot from that episode. From that time one of us is always at the wheel in tight quarters and if there's a doubt about the channel markers we stop and double check the charts. The rest of the trip was really fun with beautiful weather. We stopped and had a great lunch off one of the harbor islands. This was our last trip in the fall. We removed the mast and hauled her for the winter.
The next spring, after all the entertaining was done and the boat was ready for it's first shakedown, we paid our bill and departed our East Boston home. We were bound south for Cape Cod! 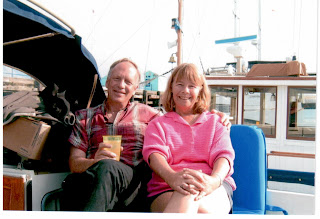 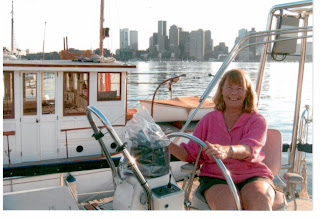 Posted by Scott Garren and Heather Shay at 12:08 PM 0 comments