All Good Things Have to Come to an End! 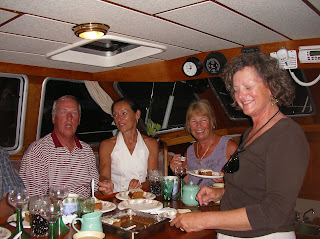 Our time in the Bahamas was coming to an end. We needed to head north towards home. We stopped for a several nights back in Fisher's Bay and had Starship Annie, Myasotis and Dulce 3 over for a pot luck. We loved spending time at Nippers and on the beach during the day and joined a big pot luck at the Sunset Grill one night. On April 21 we made our way around the Whale again with good weather with Starship Annie leading the way. 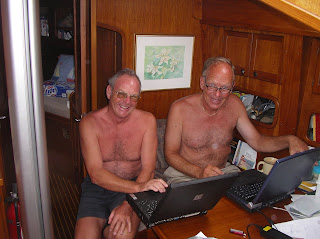 Green Turtle Cay felt like an old friend and we had two good nights there before setting off again. Our next anchorage, Manjack Cay, was our last few nights with Roger and Francoise. We swam, snorkeled, ate & drank together. Scott and Roger shared computer knowledge and we all studied the weather. At this point we were waiting and searching for a good weather window ahead for the trip across the Gulf Stream and north. 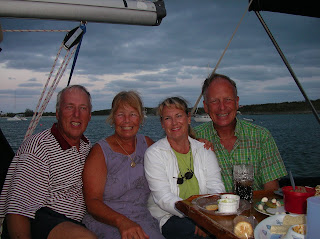 We finally said our good byes and motored with no wind over to NW harbor on Great Sale Cay. This is a deserted island with good protection and a favorite spot to wait for weather before leaving the Bahama Banks. We planned to travel with Myasotis, Adagio, Renaissance and Sea Eze. Herb Hildergard is the weather guru for this area and we signed on for a week before getting weather reports. He gave us the green light for the passage but warned us that a big storm would be coming in with northerly winds the next morning. 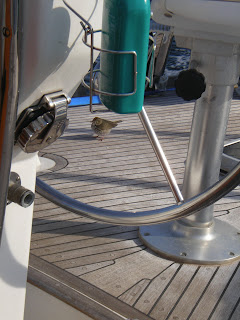 We needed to be out and along the coast by then. So on April 26 at 6:10 AM we left Great Sale with 20 knots of SSW winds and made great time with genoa and main fully out. There was wind chop on the banks but once we exited at 3 PM into the deep sea the wind increased to 25 knots and big rollers combined with the wind chop to make a sloppy sea. We put a reef in both sails as it grew dark. We could see Myasotis and Adagio behind us but the other boats parted company. At 10 PM the wind dropped and the temperature went down suddenly. It was eerie. Then the wind came out of the north and howling. We saw wind up to 45 knots in gusts and it was steady in the 30's.
We took in additional reefs and sailed until the winds came around further forward at midnight so we took in all the sails and motored. When the northly winds hit the Gulf Stream current heading the opposite way mayhem occurs. Then the rain came in torrents. We couldn't see beyond the bow sprit. Scott was glued to the radar and I sat outside in my rain slickers peering into the darkness. Thunder and lightening seemed all around us. Of course several cabinents opened up and distributed their contents around.

By dawn we were off the Florida coast near Cape Canaveral. The rain had lightened up and we could see Myasotis and Adagio off our stern again. Talking to them during the night was a huge relief. Jeanette on Myasotis was a school teacher and had the kind of voice that commands respect. She called the big ships for us and made sure they knew we were there.
By 6:30 AM it was light enough to enter the channel and all three boats tied up at the Cape Marina. Sea Eze joined us shortly afterwards. Their jib had torn during the storm and all the other boats had their auto pilots fail to handle the tough conditions. Our's happily did! But we were all really tired. Never the less Customs and Immigration insisted on our taking a taxi to them immediately - no clean up or breakfast first!

The next morning while we were sitting in our cockpit the tugboat and barge working across the channel backed up towards us. It hit the concrete piling only 12 feet from us and knocked it over. At that point someone on the boat finally looked back! We had to give statements to the marina before taking off at 1 PM. We had another night ahead of us but this time with much better weather. We had clear skies that afternoon and night with 12 knots allowing us to sail close hauled. A small bird hopped aboard and made himself at home. He went below and hung out on our stove for hours. Scott gathered it up eventually and sent it off, hopefully well rested.
Later the wind calmed down and we motored the rest of the night. In the morning the wind started up again and by the time we reaching Brunswick, GA we were in the 20's with choppy seas and long rollers. It was rather frightening to enter the long channel in those conditions sharing the space with enormous car carriers and other ships.
Myasotis had fallen behind us some time before as they continued to sail while we motored. Adagio called one of the ships coming out and politely asked their intentions (so they could move to the correct side). The response was "we're heading right down the middle and suggest you move way over to either side!"
The ICW crosses the Brunswich channel just inside and the huge numbers of different markers made it hard to find our way. Happily we sorted it out and arrived at the Brunswick Landing Marina at 4:30 PM. Happy hour was a treat and a good dinner. We helped Myasotis tie up when she arrived at 8:45 PM. Brave folks to navigate in the dark. 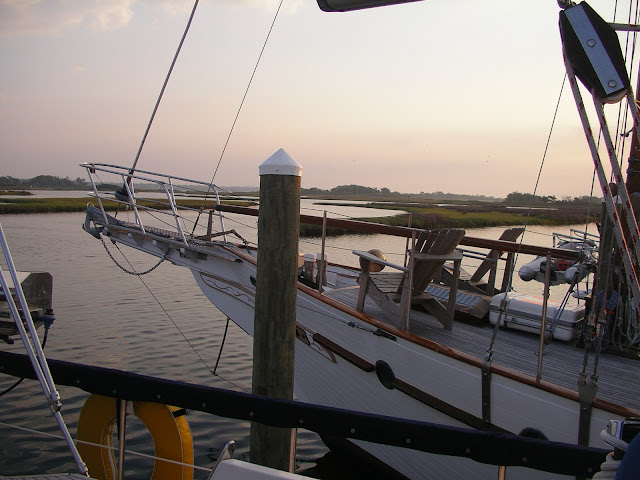 On May 2, after a few days relaxing there we were on a mission to get north of our insurance "line" before the start of the hurricane season.  We left the channel and sailed north with "Myosotis" and "Oz". It was a lovely evening to start but then the wind picked up and increasingly was on our nose so in the early morning we ducked into Charleston. We continued up the ICW all the way to Georgetown, exhausted and working hard to keep our focus as shallow spots were everywhere. I had a bad bout of cramps during the night but we were off again early in the morning and made it to the Coquina Yacht Club in Little River, S.C. We enjoyed a wonderful Italian dinner in their restaurant.
Off again early and this time in gray, rainy, gusty weather all the way to Southport where we pulled into the Southport Marina and stopped four feet from the dock (they assured us there was enough water). Deckhands managed to pull us in close enough to get off the boat after the tide came in.We stayed two nights in bad weather, walking the town in full foul weather gear. We waited for the weather to clear and then made it to the Beach House Marina - a favorite spot of ours. Our slip was again next to a pristine, schooner, shown above left. It was a beautiful day - we walked the beach and ate at a local seafood place. The next day continued fine up to Morehead City. And again the next day up the ICW, joined by Myosotis who had caught up to us by sailing offshore from Charleston. They joined us on the trip to Bel Haven and we had dinner on their boat that night.  This sleepy little town had the Forest Marina with a nice restaurant so that's where we tied up our baby and flew back to Boston on May 10 for James' college graduation from Marlboro.
Posted by Scott Garren and Heather Shay at 5:56 PM 0 comments