Our Second Trip to Maine

We didn't have a lot of time to spend in Maine as it's a long trip south to the Chesapeake for the Annapolis Boat Show and it gets cold up north early. Our two big dates were the Swan's Island Music Festival and the SSCA Gam in Islesboro. We  have gone to the first several times, last year in our own boat and this would be our second time at the GAM.
At our last posting we were in Kent Cove, Fox Island Thoroughfare. We waited in the morning for the fog to clear and then on our way to Stonington we picked up a lobster buoy on the rudder. Scott needed to dive (in his full wet suit) to cut it away. 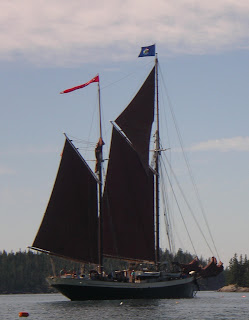 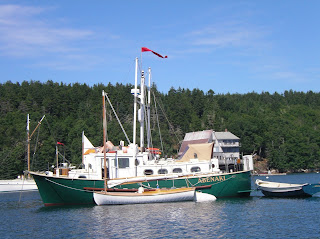 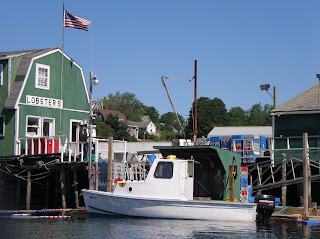 We stayed for lunch and managed to get rid of our trash, but no market or laundromat. There were severe thunderstorm warnings on the weather VHF. We dodged some big ones and anchored at 5:15 in Burnt Coat Harbor, Swan's Island. We had only 2 nights to spend as various problems had delayed us sailing north. We lucked out and got tickets for one of the nights - they were sold out the other. There are surprise music happenings during the day as well as sea chanteys being sung on boats sailing through the harbor. Bob DeFeyter and "Bobcat" were anchored nearby and we had him and his guests Frank and Tasha Jost over for dinner the second night.
On 8/4 we left at 11am and sailed over on a beautiful clear day to Camden. We stayed only a couple of hours to shop and get our email at their beautiful library. We left late in the afternoon and motor sailed over to Broad Cove in Islesboro. It took us 2 tries but we managed to anchor there by 6pm and pick up lobsters from "Destiny". It was a wonderful meal.
The next night was the dinghy roundup (one dinghy anchors and the others all tie up to each other - we must have had 20 dinghies) cocktail hour, a hilarious time really trying to pass hors d'oeuves from rocking dinghy to dinghy while balancing drinks. Unfortunately it was cut short by an approaching thunderstorm. Everyone got back safely to their boats.
Sunday is the great pot luck with various presentations on boat stuff and round the world sailors. Richard and Kathy DeGrasse host this every year at their home. They spend their winters in Marathon, FL and were to see them there many times in the future.
On Monday we motored over to Belfast, pulled up to the town dock, took on water and got rid of our trash. After picking up a mooring we toured the town and at 3pm continued on to Searsport. We intended to anchor there but the wind had picked up and it was uncomfortable so we kept on around the point to Fort Point Cove, peaceful and calm. The next morning we explored the fort remains and the unusual lighthouse. Trails led us along the coast with beautiful views of the water and Scott Free.
It was calm now in Searsport so we were able to pick up a free mooring from the museum and see that charming town for a few hours before sailing on to anchor for two nights in a beautiful cove SW of Castine between Nautilus and Holbrook islands. We spent a free day there at anchor cleaning and sewing. Our dinghy ride into the town for sightseeing and lunch was quite a ways and very rough returning in 15-20 knots of wind. It tested the stability of our little dinghy for sure.
The following day we went to Tenant's Harbor, had lunch at the Cod End Fish Market, took a walk, got our email from the library and bought 2 2.5 lb lobsters for dinner. Unbelievably good! After 2 nights there we were off again to Friendship Harbor where we had a long walk and visited the museum. The next morning off again to Round Pond Harbor where we were able to pick up the "Bud Memorial" mooring for free. Our old friends John Padgett and Wendy Griswold lived nearby and met us for dinner at the restaurant there with their children Ray and Olivia.
After two nights we circled the peninsula and took a mooring at Christmas Cove right off the Coveside Restaurant - the scene of many wonderful dinners visiting John and Wendy. They came over with Wendy's sister Gail and husband Bob to have dinner aboard at our next stop, Boothbay Harbor where we got a mooring from the Tugboat Inn after filling up with water at their docks.
It was getting time to head south again - much too short a time in Maine for sure. The next morning we left early and went straight to the Isle of Shoals off Portsmouth, N.H. and luckily were able to pick up a free mooring as it was 7:45pm. We were just in time to see the sunset and eat a happily already prepared dinner.
At dawn we witnessed a bathing ceremony on Star Island. With lots of cheering and coaxing everyone managed to jump off the dock and get out of the water FAST. Then we were off again and had a quick passage back to Glouchester. Passing by Harvey and Gail's house we got them on the cell phone and they watched us sail by with all of us waving. For the first time we anchored in the inner harbor - fun watching all the boats - for a few days. 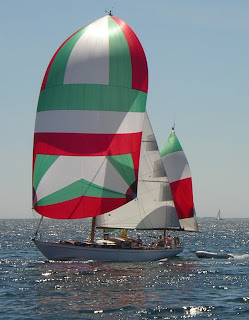 Posted by Scott Garren and Heather Shay at 7:48 AM 0 comments

We returned to Bel Haven, N.C. after James' graduation and some time at Tall Timbers in Vermont. I was alone at the house when a serious thunderstorm struck. Scott had called me to warn me and a minute later I heard a roaring sound. I ran to the front of the house and saw the wind come across the lake, creating a wave, and then the tall pines at the waterfront started to crack and fall. I ran to the other end of the house fearing the ones closest to the house would fall on it. They didn't.
It took quite a while for Scott and the boys to get back as the roads were closed and the telephones and electricity were out. They were a bit worried. I was alright and so was our house, but trees fell on the boathouse and canoe.
It took a while to clean up the mess. But we had fun visiting Montreal and the Barns in Essex, NY with Sean for a week.
Then we headed back to the boat to get it north before hurricane season. A few days in Bel Haven to prepare the boat and we tried to leave early in the morning but couldn't get out of the slip - stuck in the mud. Finally after an hour of rocking back and forth we pulled out. After two nights at our favorite stops we entered Norfork, VA where we had an exciting Fourth of July celebration anchored just off the hospital. The fireworks went off right over our head.
The next day we sailed over the tunnel section of the Chesapeake Bridge and started a three day journey to Newport, R.I. 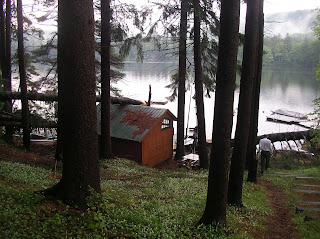 with good weather. It didn't hold however and we battled wind and rain as we tried to round Long Island. The wind was coming straight at us and so were a group of fishing boats we could see on our radar (no visability outside and it was the middle of the night). They wouldn't answer us on the VHF and we had a hard time getting around them. Meanwhile the boat is bashing up and down.
"Do we need to get to Newport tomorrow", I said.
"What do you mean?"
"How about heading west to NYC and getting in the shelter on Long Island" 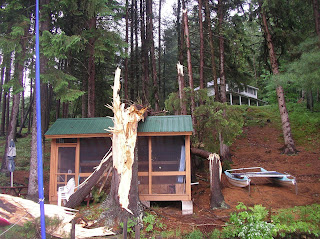 "You don't have to say it twice" He was out at the wheel and I trimmed the sails for a much easier reach and we said good-bye to those nasty fishermen. It meant 2 additional nights before reaching Newport but they were in comfort. And we got to sail into NYC at dawn - a beautiful sight.
It was an easy trip up the East River with the correct timing and a nice sail up Long Island Sound. We had friends waiting there - Roger and Francoise on "Starship Annie" and we took turns having dinner aboard both boats. My ski instructor buddy DeeDee  and her husband Eli Watson-Simon came aboard for dinner one night and she treated us to a great lunch out. 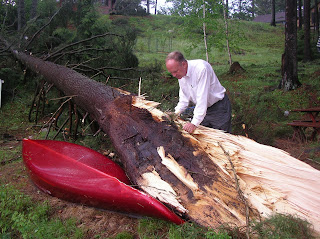 From there we sailed to Quisset Harbor where we took a mooring for a few days to visit Karen and Ted in Falmouth. Then off to Nantucket in the heavy fog. It was eerie and a little scary to hear the high speed ferry pass close to us in the channel and not even see them a bit. We made our way into the harbor slowly and carefully and picked up an empty mooring. Nantucket was a beautiful sight the next morning in the sunshine. We rented bikes and toured all over the island for a few days.
We returned to Quisset for a few nights. Russ and Ted joined Scott for a day trip over to Cuddyhunk and then through the Canal. We planned to stop in Scitate
once more but we "stopped" right outside the harbor when the engine cut off. No luck getting it restarted, it was getting dark and we aren't comfortable with sailing through a narrow channel and into a packed harbor. So Boat US to the rescue and thank goodness. They put us right on a mooring.
Next day Scott replaced the impeller and we were off, back to Boston Harbor Marina. It was 7/22. We left Bel Haven on 7/2. Six days later after making some repairs we left and headed overnight to Portland, Maine. We left Scott Free at the Portland Yacht Services while we attended Sean's Family Weekend at Dartmouth (Sophomores spend the summer at Dartmouth). Once back we set sail again north at 6:45am 8/1 and by 6pm that night were anchored in Kent Cove, Fox Island Thoroughfare after a day often in thick fog.
More on our month in Maine in the next posting.

Posted by Scott Garren and Heather Shay at 10:31 AM 0 comments