Fall Fun in Washington and Maryland 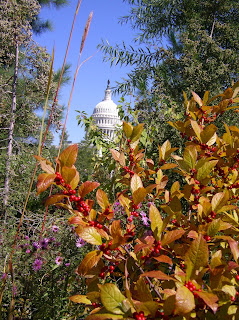 We returned to Herrington Harbor North Marina September 26 but stayed at the Herrington Harbor South's hotel for the first four nights until the boat went in the water on Friday. We drove down from Boston in our own car and making it easy to go into Washington DC and see James and Sean.
We spent a day walking all over the city and as usual eating some wonderful meals. We met they and Sean's roommates Piper and Courtney at the Eastern Market for a great brunch then went down to the Native American Museum for the Thelonious Monk Jazz Competition. This was a lot of fun and our favorite performer won. We went shopping and then cooked a lovely dinner at Sean's. Piper and Courtney were able to join us for most of the day and Morgen came right after work for dinner.
For the next two weeks we spent a lot of time working on the boat. Scott installed two air conditioning units and the new chart plotter. I cleaned and had new stuffings put in the cushions, and the canvas resewed and water proofed.

Our friends Ed and Benia on Sea Angel were just across the creek from us. We had lots of fun together at each other's boats and out for dinners. Benia and I had a fun day shopping and a terrific lunch. Another fun day we drove into Washington together. We sat by the water and ate lots of fresh seafood from the market. Then we walked to the Botanical Gardens - a first visit for us as well as the Library of Congress which we went to next.
We took the fascinating tour and had to agree with Benia that it is one of the most beautiful buildings we've seen in Washington. 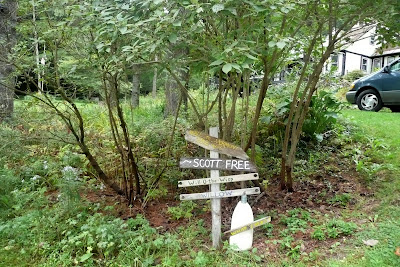 In October Walt and Honoree from "Will O' The Wisp" came for three days during the Annapolis boat show. They had come up to Vermont in September with Brenda and John from "Willow" for a marvelous visit. These are the two couples we spent 2 months with in Peru and we love them dearly. They brought a creative present. A signpost and buoy with the names of our boats and the mileage to Peru! That's it above.
We picked up Sean and Will from the Metro Stop and then spent the day at the Boat Show. The boys and I toured a great number of boats while Scott shopped at the vendor stands. It was a beautiful day for it. Later Walt and Honoree took us all out to dinner in town.
Scott and I returned on Monday evening to watch the boat show break up. This fun event is a must do for us. We've seen some amazing tricks done by the departing boats over the years! Once a line of catamarans spun in circles while parading in line down the fairway! It's very hard to get a good spot unless you come very early and wait by a railing. Unfortunately we didn't so it took some time to worm our way up to the front.
For over two hours we watched the docks break up and the boats piroette up the suddenly free narrow channels. Several daring young men climbed their boats masts - without safety lines, all to the applause of the adoring audience. As the sun went down the crowds finally dispersed along with the last of the boats. Great fun as always.


Posted by Scott Garren and Heather Shay at 4:51 PM 1 comments