Sitting and Waiting - for a window

A weather window to be precise. This next leg of our journey east to Trinidad is about 450 miles along the Columbian coast to Aruba, Curacao and Bonaire (off Venezuela). We would love to go direct from here to Bonaire, taking about 3 days (and nights). But it is unlikely the weather will hold long enough for us to do this. The prevailing currents and winds are against us and this is a notoriusly windy and stormy area. Squalls and thunderstorm are predicted pretty continuosly. So it's a little nerve wracking waiting.
Meanwhile we've had workers swarming over the boat. Scott and they have fixed the generator, the air conditioning, the ice maker, and the shore power relay. He's been searching out boat parts to accomplish that. We hired a young man to clean and polish the stainless steel and fiberglass. He's on his third day ($25 a day).
I've been cleaning the inside of the boat; washing down all the inside surfaces to get rid of mold and dirt. And then there is shopping at the supermarket and the public market, followed by repackaging, pre cooking, stowing and inventorying.
Every morning we walk for an hour or more around the old city. There had been a happy hour evening and pot luck here at the marina with the whole cruising community showing up. We've met a lot of new friends and seen many old ones.
So waiting around isn't boring - or scary, but we're still hoping to take off soon and get this section of our trip over and done with!
Posted by Scott Garren and Heather Shay at 11:41 AM 0 comments

Cruising is a study in Contrasts 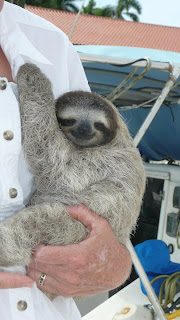 Actually our life is split into two very different lifestyles; home in the US with our family, friends and now our new community of Shrewsbury, Vermont and our cruising life aboard "Scott Free" with a different group of friends and community. This later existence provides a much wider scale of certain experiences - in particular recently is frantic activity/pain/fear vs boredom/pleasure/comfort. Our first two weeks back to the boat, "on the hard" at Shelter Bay Marina, 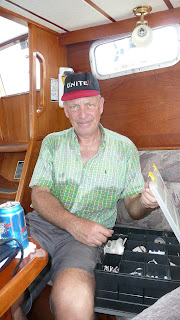 Colon, Panama we had both ends of the scale. When the boat is up on stilts in the boatyard the plumbing doesn't work - think back to chamber pots! It's the rainy season and the boat is covered with canvas so there's little light below and WOW, is it hot! Plus of course the boat is filthy. Frantic activity and pain are the dominent feelings for several days. Once in the water however the cover comes off, the breezes blow and the toilet is usable - heaven, comparatively. The manager of the marina, Bruce and his wife April, live with their children and their pet sloth (see here) on their boat "Chewbacca". They really helped us out with boat projects and in two weeks we were ready to head east. We took off in with thunder storms on all sides to motor towards the San Blas islands: the next day and twenty miles from our destination the engine stopped. There was very little wind and we were not far from the coast so immediately the pit of my stomach tightened up. There had been storms with thunder and lightning off in the distance for two days and one was 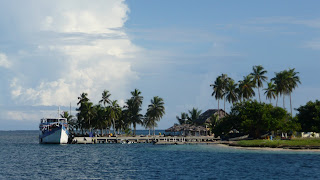 approaching. Scott started working in the engine room and I watched the wind indicator start moving up. Soon we were in 20+ knots of wind and pouring rain. Happily Scott changed a fuel filter and got the engine working but it stopped twice more. Changing fuel tanks (we have 2) seemed to help but we didn't know why. The "bad" tank had more fuel than the good one and we didn't fill up in Panama as it was cheaper in Cartageña. So now I'm also worried about running out of fuel before we reach there (Scott doesn't worry; he gets frustrated). We managed to get into Porvenir, an administrative location for the Kuna, and get our paper work done just before it closed for the day. 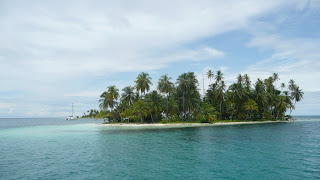 We are on a "schedule" unfortunately. We need to be in Trinidad by Nov. 18 and that is 1,000 miles away from Colon, Panama. We stupidly bought round trip plane tickets from there. As we go 6 miles/per hour at the best, that is a lot of traveling. And then, of course, we got a later start from the marina than hoped. Everyone thinks we are crazy as this is a notoriously difficult passage, against prevailing winds and currents (and of course along the coasts of Columbia and Venezuela).
The next day the engine stopped several more times. Now, except for the squalls, there is little to no wind right now. This makes it possible for us to make this trip - but you have to have an engine! Scott got it started each time but only for a while. We managed to get into the Coco Bandares islands (through a narrow reef entrance - I was holding my breath) and they are as close to paradise as you can get out - think Bali Hai. This is the pleasure/comfort end of the experience and it IS definitely heightened by the anxiety experienced earlier. If you enlarge the picture of me after a lovely swim you'll still see the worried look. 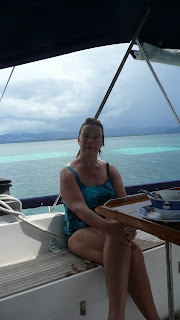 The next day we swam, snorkeled etc. and Scott spent time cleaning, tightening and changing oil filters. So we set to out sea the next morning early for Columbia - two full days and a night away. Twenty five miles out and three stops later we turned around and returned back to our anchorage. Fifty miles with no gain and a lot of anxiety (me) and annoyance (Scott). 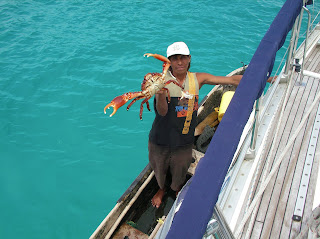 The next day he spent hours going over the entire fuel/air system, found a broken hose clamp and declared the problem solved. Happily for us, not long after that a Kuna man in a dugout brought over some crabs for sale. They are huge and we bought just one as we had a lot of fresh fish on board. Scott caught two more earlier out to sea. We cooked it and picked off quite a bit of meat which I combined with some heavy cream and green onions to put over the fish. Wow! That made us forget the engine for awhile. 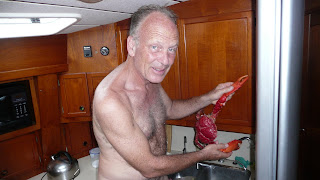 We were off again the next morning. This time, after more problems, I suggested we head towards the nearest mechanic. Much to Scott's frustration this was going back towards Colon. But the engine continued to quit and he aknowledged it was the best decision. We managed again to anchor near the "Swimming Pool" in the Eastern Holandes islands and he made a VHF call out for help. Several people called to talk and make suggestions. One of them really sounded promising, cleaning out the fuel hoses with compressed air from our air tank. After accomplishing this difficult task, he declared victory again. We would be running some tests tomorrow. The anxiety in the pit of my stomach continued however, although the pot luck on BBQ island that night temporarily shut it down!) 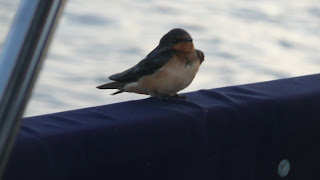 But this time it worked! It took 100 miles before I really relaxed - it didn't last long! Our first day the weather was perfect - flat seas, a gentle breeze and sunny skies. There were a lot of tall clouds way off in the distance. Well at 10PM that night we entered them - all night long we traveled through a series of squalls and the seas built and built. Think of being in a washing machine, in the dark, in the pouring rain with wind in the 20's, gusting to the 30's. One of us is glued to the radar trying to see little dots that indicate other boats out there as there's no visability outside and the other is in the cockpit hanging on for dear life.
Meanwhile we found out just how poorly we had stowed things away! Bottles, dishes etc. crashed into each other in the shelves and a lot of things hit the floor. Scott saw the computer sliding off the table and managed to slide underneath it - saved! We were however extremely lucky that none of the exciting lightning bolts came near us. Other people have not been so lucky out here - several have been hit and have every piece of hardware fried on the boat. This is not only expensive and time consuming but makes it hard to find shore! 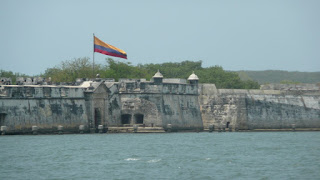 It was a long and sleepless night for both of us and as dawn approached, the storm abated and eventually the seas started to calm down. By noon the sun came out and we could start to put the boat back together. We had several "hitchhikers" during the night - two tiny birds, one shown here, huddled below decks at times and found respite from the storm. The last despite finding a moth to eat and some fresh water to drink succombed to exhaustion and we found him lifeless on the bunkroom floor. Our engine was fabulous thank goodness and we made very good time on the crossing. By early afternoon we realized that we could make it all the way to Cartagena. The grand entrance to the harbor, guarded by twin Colonial forts with the Columbian flag waving proudly over them, looked wonderful to us. And then to make our joy complete, our old friend John, manager of the Club Nautico marina, was able to find a berth for us (that evidently had been promised to others we heard later). 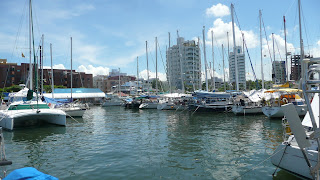 Now this is the other side of the contrast - the opposite of activity/fear/pain and it is bliss. At 5:30PM we were tied up tight to the dock, in the cockpit drinking gin & tonics, followed quickly by great leftovers and then into the flat, soft, dry (I managed to drum up the energy to change the sheets) bed in the quiet boat. We slept for 11 hours straight!
Posted by Scott Garren and Heather Shay at 4:56 PM 0 comments