Back to St. Augustine & Sean's Visit 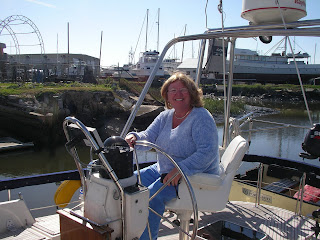 Scott flew back to St. Augustine February 21st, a week before I did. I had to teach skiing through Washington's Birthday week and he had a lot of work he wanted to do on the boat. The biggest project was rebedding the master stateroom windows. St. Augustine Marine is a good place to do work and very protected but it's quite away from the town and shopping. When I joined him we walked around in the evening admiring the beautiful historical buildings and lively street life. We saw a classical music concert by the St. Augustine Symphony in a historic market building. 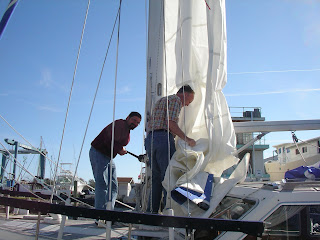 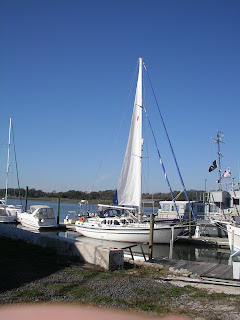 My first cousin Joanie (that's her at the wheel above) and her husband Kent (with Scott working with the sails) came over from Tampa for a weekend visit. They really enjoyed staying on the boat. We were only sorry it had to stay in the boat yard the whole time. It was great to head out the creek to the ICW and finally start south again on March 7th. 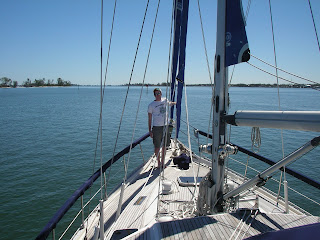 Our youngest son Sean was coming down for his spring break in just a few days. We stopped at the Halifax Harbor marina in Daytona Beach for a few days and drove to Celebration for a lunch with Eileen and Dick, friends who sailed their Nauticat 43 to Europe a few years before. On our next day motoring south we hit a sandbar at "34" Red just after the Cornarda Bridge. We backed off of it OK but couldn't find a way through. Sea Tow on our VHF recommended we take the Sheephead Cut Channel instead of the ICW and that worked. 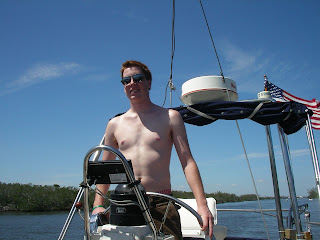 We anchored in 9 ft. of water off the channel between "54" and "56" at mile 889 that night. On March 10 we woke to clear cold weather with the wind at our backs. We touched bottom again with much shoaling between "79" and "81" but chugged through. We pulled into Melbourne Harbor Marina in with lots of sun, picked up a rental and drove down to Ft. Lauderdale to pick him up. 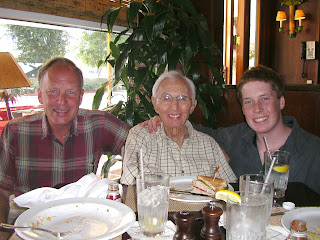 Our first day together was in the 70's with lots of sun. We touched bottom once very soon after leaving and then had no problems until getting to Ft. Pierce. There we hit again on the shallow bar between the anchorage North of North bascule bridge and the ICW. Sean and Scott took the dinghy into shore and walked around a bit. The next morning we were off early, later having problems with the engine. After changing the fuel filters we were able to continue. 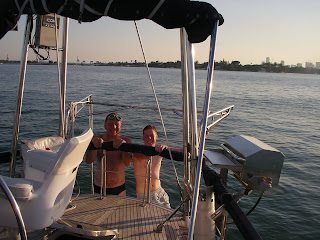 At lunch we pulled off the channel and took a break, swimming and eating a nice lunch. We anchored that night at the north end of Lake Worth. That afternoon we went through 6-7 opening bridges with tons of other boats. It was frightening at times waiting in front of the bridge with huge power boats crowding on every side (and a lot of idiots at the helms).
The next day we took a taxi into Palm Beach and had lunch with Mitchel and Uncle Dan. 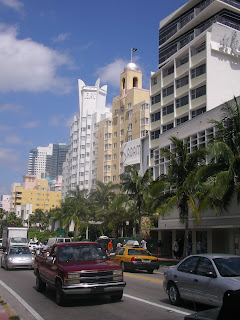 Trying to find a bus for the trip back we met a nice couple who drove us all the way to our dinghy landing. We were glad to see our dinghy and engine unharmed. We were nervous because there were notices all over area regarding theft problems. Unfortunately there wasn't any other place to go.
On March 15 we went out the inlet and sailed off shore down to Ft. Lauderdale. It was a calm lovely day. That afternoon when Sean was seated up on the bow sprit, the pin on the anchor broke and it and hundreds of feet of chain fell unchecked. We were incredibly lucky it all missed Sean! What a frightening experience. Luckily we have a windless so we could recover quickly. The GPS also went on the fritz several times and Scott hooked up the portable GPS as back up.
It was lovely to pull into the beautiful and hugely expensive 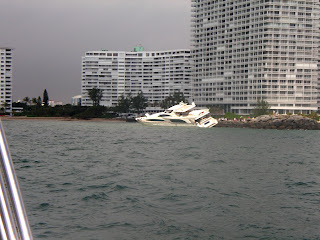 Marina Del Mar right near the inlet entrance. This is where famous detective Travis Magee parked "Busted Flush", his beloved power boat. The author lived here himself on his trawler and there's a memorial plaque on his slip. It was the most expensive marina we've ever stayed at but the beach was right across the street and there was a nice pool as well.

Further south from there is a fixed 58' bridge. So we headed out the inlet and down the coast. It was a rough day with 4 - 6 foot waves, heavy rain early and 20 knots of wind, no problem really but right on the nose, so uncomfortable. We were afraid it would get worse, but it didn't! Sean and Scott tried fishing - no catching. The scene coming in the Miami inlet was really strange. A big luxury powerboat was up on the rocks right at the entrance. I hope they fired that captain!
It is very confusing as you enter Miami.

When you join the ICW there are two bridge going north and a myriad of channels and markers. We planned to anchor up behind Miami Beach off Sunset Island but the channel leading there was very unclear and shallow. When we finally had our destination in sight a dinghy roared up. The anchorage ahead was full and crisscrossed with anchor lines. It appeared to be a 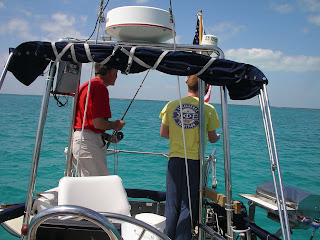 permenant community. The "helpful" cruiser Rick led us a half mile away to a spot in the middle of nowhere. He pointed out the way to a dinghy landing and supermarket though and we stayed three nights there. Sean had a good friend in Miami that he called and spent a full day/evening with. We were a bit nervous about his making it back to our boat in the dark with the dinghy but it all worked out. Scott and I went into Miami to get mail and boat parts - had lunch too. 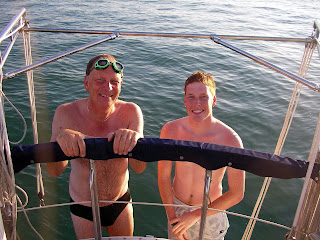 South Beach is a fun place. We enjoyed the architecture and the food. Our original plan was to leave from here and head over to the Bahamas. Unfortunately Sean had "misplaced" his passport so a change of plans was necessary. We decided to head down to the Keys. We left at dawn, were turned back from the main channel due to big ship traffic and at first didn't understand what we should do next. Happily a fellow boat told us to use the other, Commercial route. It was a nice sailing day. We stopped at lunch near a reef and snorkeled. That night we anchored at Rodriquez Key just south of Key Largo. It was a long wet dinghy ride into shore for a brief visit. Next day it was sunny and breezy. We averaged 7-8 knots with first reefs in the main and jib, both close hauled. Fun! We tied up at Burdine's Marina at Marathon Key at 3:50 PM.


The next day we drove Sean back to the airport. It was a great visit with him and we were really sorry to see him leave!
Posted by Scott Garren and Heather Shay at 12:54 PM 0 comments