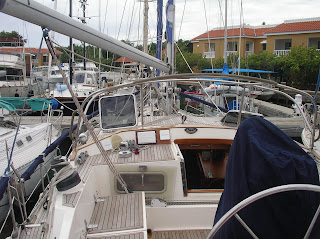 Hurricanes are very rare in the ABCs. In fact named storms at all are unusual. But Friday morning 8/31 we were listening to Chris Parker on the SSB give the weather report and he predicted we'd be having a close up experience with Felix. I got in the dinghy and raced over to the marina office. Richard from Bagheera was already there waiting for the office to open. We both got slip assignments and moved our boats in right away. We had a space between two boats, not on a dock. One was occupied and helped us tie up but the other hadn't had a visit from it's owner in over a year. By the next morning Felix was about to be declared a hurricane and we had a lot to do that day getting ready. 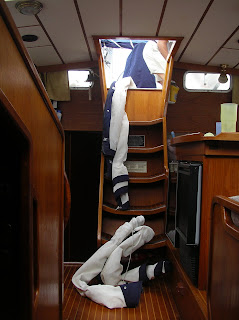 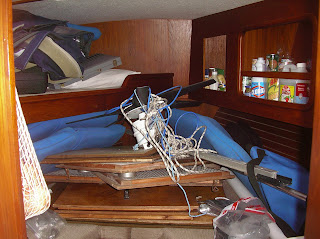 We stripped all the canvas and equipment off the deck. Pictures show the mess as we had to put everything below and the view from the stern without a dodger. We pulled our kyack up near the restaurant and tied it securely to the railing. We doubled all our lines and those on the deserted boat next to us. Their dinghy was hanging free from the mast so we lashed it down securely on their deck. Other boats were taking the last spaces inside the marina and everyone was busy battening down the hatches. Four of our good friends had decided to stay outside but around 9 PM they succombed to the entreties of their friends and came in. Spaces were found tied up to other boats and they put out anchors as well. After all that excitement Felix moved just a little bit north and spared us all. Still we had 45 knots outside the marina and less where we were. A few boats broke free of their moorings and one washed up on the beach. No one was hurt. Nevertheless we were really glad we had prepared for the worst (and got the best).
Our next challenge was Scott's knee. It became infected and he saw a local doctor twice. Despite the oral antibiotics it kept getting worse and when he began running a fever and it had swollen up, we went to the Emergency Room at the hospital. Our friend John on "Tango" is a twice board certified surgeon and he was an enormous help. He spoke to the surgeon that night and then called an orthopedic surgeon friend in the States to discuss the situation. He was very concerned that the infection might have gotten into the joint. If so, Scott would need to fly back to the States. Happily everyone felt it hadn't, so they operated on him the next morning and cleaned it all out. He stayed four days in the hospital. 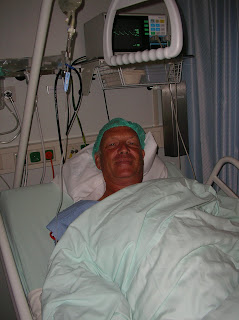 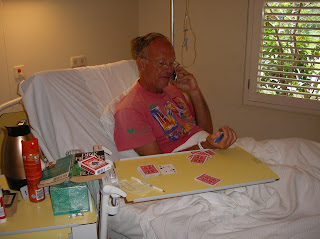 The hospital was very small and there is only one surgeon on the island but everything was very professional and we felt confident. The wound has been a long time healing. It's been almost a month and it's only recently stopped draining and closed up.
Posted by Scott Garren and Heather Shay at 2:17 PM 0 comments

Spending the summer in Bonaire was so much fun. We did enjoy Trinidad last year but everyone agreed that this is better. Social events and great people happen in both places but in Bonaire you can swim and dive right off your boat as well. Sunday afternoons we usually play dominos but near the end of our stay Louise and Gary on "Lulu" hosted a great party afterwards. 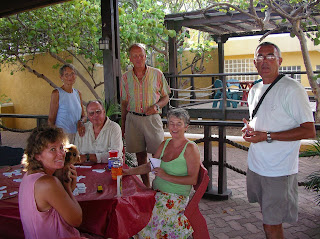 That's Mary from "Tango" on the left, then Bill and Carol from "Hope", Scott, and last Norma and Trevor on "Beebopalula". Below is Gary, Suzie from "Wishful Thinking", and Louise. On the right below Scott and I get dressed up for a art exhibit on "Freewinds", the Scientology cruise ship which spent two nights a week on Bonaire. Our friends Richard and Elaine from "Bagheera" are on the bottom left in the ship's cocktail lounge. We regularly attended jazz concerts and movies on board as well. Their house band was excellent and each week they had a different guest soloist. 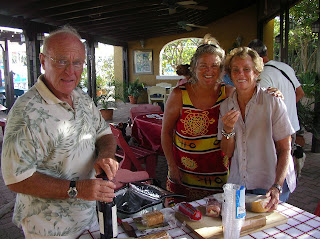 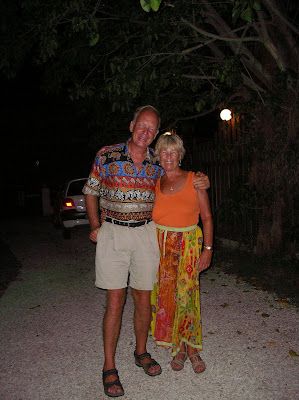 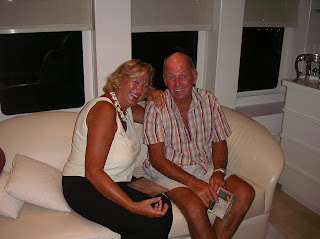 Posted by Scott Garren and Heather Shay at 1:55 PM 0 comments