Traveling on the Intercoastal Waterway is a challenge, particularly when you have a six and a half foot draft and a mast that is 63' high. The bridge clearance is only guaranteed as 65'. You never feel comfortable looking up at one as you pass under. We had a list of all fixed bridges with notes from a cruiser friend on actual clearances and ways to measure it. This mostly involved the water height against the boards in the channel under the bridge. We had a cruising guide for the Waterway, MapTech guides for the Central and South Eastern Coast, and a strip map for the ICW. Of course we also had electronic charts. We used all of them!
There are hundreds of opening bridges of all types and with different opening schedules. We needed to figure out the distance and speed necessary to arrive at the next bridge at opening time. Currents and lots of boats made the small area before the bridge treacherous.
We returned to Norfork after Josh and Michal had Arielle and we'd had some time visiting them. It was 10/29 when we started motoring south again. We had one lock and a number of opening bridges to go through before reaching the Midway Marina at Coinjock (mile 50 marker - Norfork is Mile 1) where we spent the first night. They had one long dock and it was crowded. 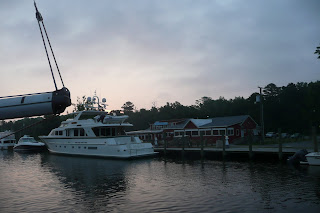 We were lectured on the necessity of giving actual boat length in these situations, not registered length. The difference for us is 6-7 feet. It was a tight fit! The photo above shows the Coinjock Marina across the narrow canal. Next day was cloudy and the weather was deteriorating, so we gave up our plan to go up the Ablemare Sound to Elizabeth City and instead continued south, anchoring at mile 104.8 on the Alligator River off Tuckahoe Point. Nice spot - Scott went swimming the next morning to check on the prop and rudder - all was well so far.

We anchored in Belhaven, NC for the following night (that's the undeveloped part of the Belhaven waterfront although old brick chimneys show that this was once more industrial) and Oriental Harbor the next. The latter was so packed we had to anchor right at the entrance. The days were warm and sunny and we were sailing for hours some days.


Numbered channel markers show the limits of the ICW; red on one side and green on the other. Most have osprey nests balanced on top. Temporary markers often show shallowing spots and are floating buoys. In one picture above here, rather blurry I'm afraid, you can see both kinds of red markers. In the other picture you can see the osprey on top of a green marker.
Our next main stop was in Beaufort. We stayed at the Merchant City Yacht Basin, actually on the Morehead City side of the channel. They had courtesy cars available and we really needed one to do some provisioning and shopping for boat parts - and they had free laundry! Somethings is always breaking on the boat!
It was a difficult exit from the Marina the next morning 11/3 with strong current and wind. This was an unusally memorable day. First we were traveling that day through Camp LeJeune. As we approached the borders of the base, several fast boats raced towards us. Two veered off into a small anchorage on our right and proceeded to rain machine gun fire on the cruisers within. WOW!! We stopped dead. One boat remained in front of us with soldiers. It was really scary, but when there weren't any screams etc., we started to hope it was a training exercise (and the cruisers had been warned). Scott called on the VHF and after a while the soldiers motioned us on (but didn't talk to us). Yes SIR! Not far down the channel, after passing the Camp border we made a wrong turn into a side channel and more soldiers came after us to warn us and point out the right direction. Thank you SIR!

Next, we ran into a fishing net and managed to set ourselves free after some work (we and the fisherman both apologized, but the net was across the channel), then we heard the calls for help from a older couple just off the channel who had run aground. We managed to tow them off. At 4:45 we tied up at a lovely slip in the Beach House Marina in Surf City. A classic wooden schooner beside us made for a lovely sunset view!
We had a 8 AM bridge opening the next morning but missed the 10 AM one down the way and then as a consequence missed the 11 AM. Each time that meant waiting in front of the bridge for an hour for the next opening - all making the day a lot longer. Lots of bridges this morning. We entered the Cape Fear River at 2 PM with winds up to 34 knots, cloudy but no thunder storms. It was great to tie up to the outside dock at the South Harbor Village Marina near Southport at mile 310 at 4:45PM.

It was a late start the next day but we were through the Pontoon Bridge at mile 337 by 2 PM and anchored at 6 PM in a bight near Enterprise Landing. We had passed the rockpile and the busy free dock at Barefoot Landing but decided to keep on going and make up some time lost earlier that day. We motored in the dark near the end but the bight was obvious thank goodness.  The next morning we left early with mists surrounding us. At 10:30 AM we toured Georgetown Harbor but it was too crowded. We managed to find a place on the other side of the center island. It was a pretty spot if you didn't look at the giant factory in one section of the view. We walked around the town and had lunch, bought groceries. We were invited over to "Idle Ours", Jack and Sandy, for drinks that night. 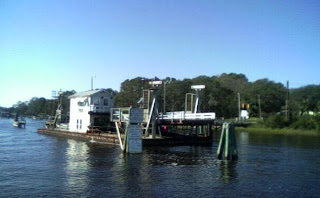 The next day was sunny and warm. We found lots of shallow spots along the way. We trailed mud at times. I noted especially Red "92"! We anchored off the City Marina in Charleston, S.C. and the next morning went into the city to have breakfast at Poogan's Porch and walk around the city. We left anchor at 11:15 AM 11/8 and anchored in the South Edisto River about mile 504 up around the bend from the ICW in a lovely 12 foot spot.
The next morning we weighed anchor at 6:40 AM before the sun rose. It was cold but sunny and very breezy. We sailed for part of the way, and bumped the bottom once. By 1:15 AM we were anchored in Beaufort, S.C. (pronounced Bewfort not Bowfort, as in N.C.) and walked all over the town admiring the beautiful homes.
As usual we were up and off early as the high tide was early too. November 10 was a sunny windy cold day. We bumped at the beginning and end of Fields Cut, also at the end of Walls Cut, on the left side. Then we hit hard at Red markers "2" and "4" on the right. But we managed to back off and kept on going!

Next thrill was running out of gas just before the bridge in a narrow cut of the Wilmington River at mile 578, the end of Range "B". Luckily we had enough room and depth to anchor. Scott just had to change tanks. We have two. Now he is careful to monitor them! Not far beyond was our day's destination, Bahia Blue Marina in Thunderbolt. We had two days to explore Savannah, Georgia!
We hired a taxi to take us into the city and fell in love - with the city. Our taxi driver recommended a fantastic restaurant where we enjoyed a memorable meal in the evening. We walked all over and explored the multitude of beautiful squares, all surrounded by fabulous homes. Scott fantasized about living there and poured over the real estate books! We also walked around Thunderbolt and found a great fish market.

All too soon we were off again 11/13 from 7:15 AM to 12:30 PM, anchoring in Walberg Creek. These short days were due to the tides. We could only travel at half tide through high to half tide again. It was overcast, chilly and windy. We woke up that night to wind in the 30 knot range and swift currents. It was really noisy in the boat!
The next day it was the same so we took the alternate route through Walberg Creek as it was a rising tide and held our breath at the shallow junction back with the ICW. At 10 AM we entered Sapello Sound at mile 640 with confused seas and at 3:30 PM were tied up at the Golden Isles Marina with wind gusting to 35 knots.
We stayed for two nights here. They had a friendly bar and restaurant and loaned us bikes for a fun day exploring St. Simon's island. They also let us use their courtesy car to see Brunswick and shop.

On 11/16 we headed south again and were glad we had waited an extra day at the Golden Isle when we saw the confused seas in St. Andrew's Sound. We stopped early and anchored at Cumberland Island about 1.5 nm off the ICW. This is a beautiful spot and it was great to walk around the island and see the historical sites.
11/17 was a beautiful sunny warm day and we were grateful. We were able to motor sail for part of the time and anchored late at mile 765, Pine Island with five other boats.
This next and last day, November 18, of 2004's cruise ended in St. Augustine, Florida. We had quite a time getting there as we followed some other boats in the harbor, instead of the ICW channel, and ran aground. Luckily we were able to motor off and with some advice from the tow company, find our way back. We pulled into the St. Augustine Marina in the San Sebastian River and settled "Scott Free" in for the winter!
Posted by Scott Garren and Heather Shay at 11:29 AM 0 comments