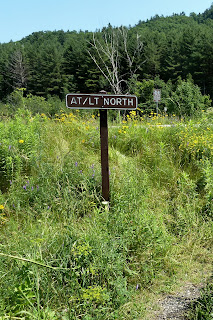 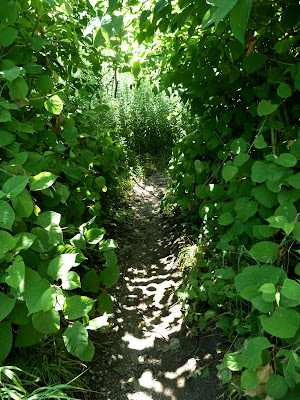 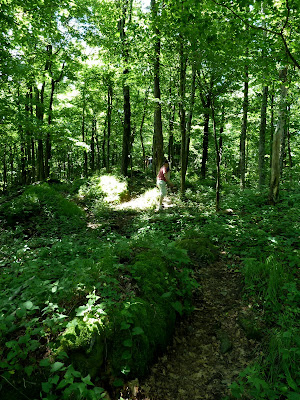 Years ago I hiked the length of the Long Trail from Massachusetts to Canada, about half of it with Scott and the other half earlier, often alone. In a similar vein I connected sections of the Appalachian trail from the Maine border to that of New York. Completing the AT is on my bucket list. I vicariously attempted it supporting my son James' attempt back in 2001. He started from Springer Mt. on March 8 and made it almost to Virginia before stress fractures in his feet defeated him. But he had a wonderful time before that - and had provisions the envy of all others on the trail. That was my contribution to his trip.
Good friends of ours here in Shrewsbury, Gerry and Chyrl Martin, did the entire length in one season after retiring some years ago. It was very difficult but worth while for sure. Scott is not interested in that approach, but I might convince him to do sections with me at some point. Unfortunately with six months on the boat, this dream will have to wait.
But we do short hikes in this area on the trails a lot. These pictures were taken heading south from Rt. 103 and ending at Spring Lake Ranch, just up the road from us. Doug, David, Scott S., Scott and myself had a beautiful morning's trip. The trail starts by crossing the narrow suspension bridge hung over Clarendon Gorge and the Mill river. This bridge is dedicated to the memory of Robert Brugmann, a seventeen year old who was swept to his death in 1973 by the river. He was trying to cross it in high water after the old bridge was destroyed. It's a beautiful bridge and a lovely spot.
The trail climbs steeply up for a mile to a long ridge with some nice views to the west. It continues along that ridge to an old meadow, now filling in. A little later in the summer they'll be lots of blackberries and some blueberries there. At the next junction with a cross country trail, a side trail leads down to the left, criss crossing a power line, to Spring Lake. If you go right along the shore, you join the rutted dirt road that leads to Spring Lake Rd and back down to Rt. 103. If you walk all the way back to your car at the parking lot it's a total of 7.5 miles. Happily the last half of the hike in down hill!
Posted by Scott Garren and Heather Shay at 4:21 PM 0 comments


The Vermont Symphony Orchestra (VSO.org) was founded in 1934 by Alan Carter and he led them for over 40 years. After only two other music directors, Efrain Guigui and Kate Tamarkin, Jaime Laredo, the famous violinist, took over in 2000. It is the oldest state supported orchestra in the country. They give over 45 annual concerts all over the state and 176 school performances. It became quite famous nationally when it performed in each of the state's 251 cities and towns between 1984 and 1986. They don't have a home concert hall - the whole state is their venue.
This is our second summer series evening - last year it was at Okemo Resort and this year at the Polo grounds at Quechee. The orchestra gives 8 outdoor performances in their Summer Festival Tour.

The program, with Anthony Princiotti as conductor, was:

We arrived an hour and a half before the program and set up our picnic dinner. Many larger groups had already set up elaborate meals and were enjoying the perfect lawn set out in front of the tent covered stage. Our meal was potato and crabmeat salads with lettuce and tomatoes. This was accompanied by a gin and tonic first and a glass of white wine during dinner. I made a fresh fruit salad for dessert and happily the only food booth was ice cream, so we added some sorbet. Mid way through the second piece light rain began to fall. Resilient Vermonters all, no one left. Instead folks opened up their umbrellas or snuggled into their rain jackets and continued to enjoy the concert. The showers were brief however and only a few people got really wet. It was a warm evening so no damage done.
As the 1812 overture began, we noticed some bustling activity near the edge of the field and soon, on cue, the fireworks began. How marvelous! The pyrotechnics lasted through that piece and the next two shorter encores. Everyone clapped on time and cheered. What a wonderful late Fourth of July moment!
Posted by Scott Garren and Heather Shay at 8:52 PM 1 comments 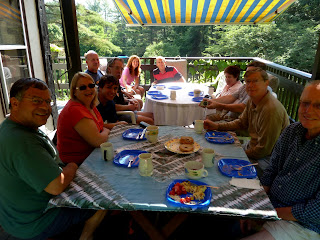 Most of the group have been coming since the beginning and James, Jenny, Julie and Scott were babies at first. A few of our original friends have moved away and each year we enjoy meeting someone new so the cast of characters changes some. Still, a core of old friends look forward to this annual get together and we feel lucky to be part of this lovely tradition.
Posted by Scott Garren and Heather Shay at 6:54 AM 0 comments