Sunday, September 15 was the second annual Shrewsbury Day and a rousing success. It didn't hurt that it was perfect weather. The whole town turned out either in the parade or watching it!  Afterward, there was a BBQ lunch, lots of activities for the kids and live music. It was a perfect day to celebrate community - and we have a fantastic one here in Shrewsbury. 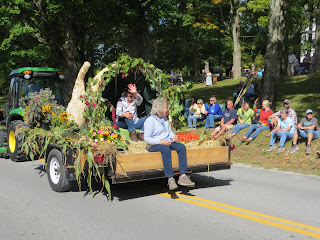 
Our oldest son Joshua's family moved to London last summer. They came to visit us twice since then, so this was our turn. We spent a week with them in London and a week up in Scotland. The train trip up to Edinburgh was unexpected. It was the hottest day on record ever and the train tracks couldn't cope. We spent hours sitting on the track, unable to leave the train. There was no airconditioning working. People were taken off the train with heat exhaustion. We ended up on 3 trains and happily did make it to Edinburgh - at 1:15 in the morning! Our 5 grandchildren were amazing - never complained - just read books and played games (board games, not computer). We spent 3 nights there and then rented a 9 passenger van to take us around the Highlands.
Everyone loved Edinburgh. We saw the Castle, the new Parliament Building, the Dungeon Show and walked all over. From there we drove up along Loch Lomond to our first hotel. But not the usual way. We got to a traffic circle at the bottom of the lake and were stopped by a policeman. The road was closed, he informed us. But on learning we were headed for the hotel, he let us through.
We stopped in Luss to tour the small charming town and the beach. But once out of there, we were stopped again by the police and this time, weren't allowed to proceed. It was late and our hotel, the Lodge on Loch Lomond. was just beyond, but a fatal car/motorcycle accident up ahead had closed the road. Here's where Scott's navigation skills and my driving chutzpa saved the day. Let me tell you - it's hard enough to drive on Scotland's narrow (in many cases, only 1 lane for both directions) roads - but to do it with a huge 9 passenger van, is much harder.  Scott found a series of tiny roads that finally did end up at our hotel an hour later. It was a huge relief.
The Inn at Loch Lomond was very nice. We had three rooms, two in the main building and a "suite" in the beach house. Josh was only with us on the weekends so we were down to 8 people. The next day we drove north through Glencoe and spent several hours at the Visitor's Center. We learned about the history of this area and the highlands in general. The views were amazing the whole way. Hiking paths lined the road on both sides up in the hills. We wished we had time to do some long hikes. But our afternoon allowed a lovely one, although shorter. We took the gondola at the Nevis Range resort just past Ft. William.
The next two nights were spent at the Holly Tree Hotel where they had an indoor swimming pool - very popular with our grandchildren (and ourselves). The meals there were excellent as well. The food is great in Scotland. My favorites were Cullen Skink (smoked haddock chowder) and salmon. Scott really got into blood pudding and haggis (served every morning at breakfast). The last two times I was in Scotland, I sampled a lot of Scotch - but not this time.

The next day we headed up to Loch Ness. Tickets to the "Beastie Boat" tour were difficult to get at the last moment. We should have bought them way in advance. But we were able to get 5 of them - Scott and all of the kids, except Ariella, who volunteered to go with Michal on the regular boat tour. I enjoyed a quiet lunch at the hotel next to the Tour dock. Everyone loved the boat rides.
On the way back we watched boats work their way through the Caledonian Canal locks.
Next day we drove to Oban, a harbor town on the west coast. It was fun walking along the promenade and we managed to get on the docks and meet some sailors. An upscale coffee & chocolate shop made for an excellent break. That afternoon we drove along Loch Awe (A85) back to A82.
On the way, we stopped at St. Conan's Kirk - a gorgeous church built in 1883.
From there we headed south to Glasgow, where we spent one night at the Hilton Hotel - not Scott and my usual choice for sure but everyone loves having a pool.
In Glasgow, we took a bus tour of the city
as we had to leave the next day to return the van in Edinburgh and take the train back to London from there. It looks like a lovely city and worth more time on another visit.
Happily, the train back was uneventful and on time.
In London again we spent most of our time just visiting with our family. Our son Josh flew back from Dallas and we celebrated Shabbat with several great meals and met some of their friends.
But we did take one day to visit the new soccer stadium for the Tottenham Spurs. Our youngest son and husband are big fans. The brand new huge store there had every item possible with their logos. After purchasing quite a few, we headed down to the Thames and walked the Thames path, where we had a good lunch at the Oyster Shed.
We had one other special non family event. An overnight with dinner & breakfast with our cruiser friends Dic & Lizzie Clubb. Their sailboat "Indian Summer" is at Tortugal Marina with "Scott Free". We've enjoyed many great times with them in Guatemala and Belize. It was fun to see their beautiful home and garden - they were gracious hosts.