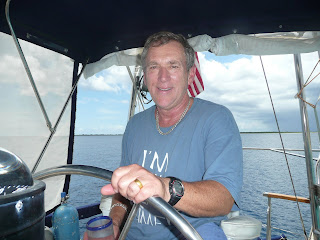 Our great friend Russ Wolf flew to Bonaire for our two week trip east to Trinidad. He and his wife Marty had joined us for a long weekend in the Chesapeake Bay five years ago but work and family obligations kept him away until now. Luckily for us, he has semi retired and has a more flexible schedule. We really tested his flexibility this time. 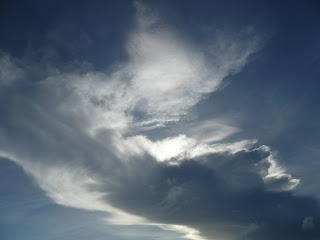 Despite his arrival at 5 AM we dropped the mooring at Bonaire that very afternoon at 4 PM and motored off to Los Roques, 115 miles east. During his short time on Bonaire we ate a huge breakfast at "It Rains Fishes", drove him around the south end of the island to Lac Bay to see the salt pans, slave houses, flamingos and wind surfers, and still had time to swim and snorkel! 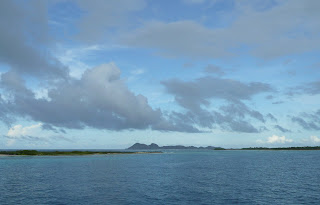 Needless to say he was exhausted that night and we kept him off the watch schedule till the morning. Going east is generally very difficult. Both the prevailing winds and currents are against you. During normal trade winds this would be almost impossible but in the fall months the winds are often lighter. 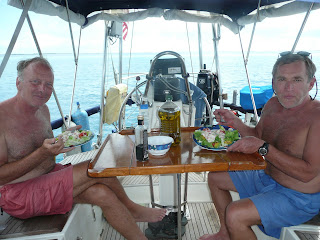 We had been listening to Chris Parker's weather report and watching the grib files for over a week. At least three days of favorable conditions were forecast and possibly longer. Our first night was very pleasant - about 10 knots of wind and 3-4 foot seas. A swell from the north was building so we were thrown around a bit but everyone got some sleep. 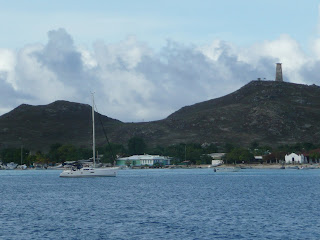 We had some rain and clouds at first but then it cleared off, the full moon rose, and it was unusually bright.
As we approached Los Roques the sea calmed down and the sun was just high enough to see the depth of the water by the colors. All of the islands are flat except for El Gran Roque at the far northeastern end. Within an area of 14 by 25 miles are a hundred of more small islands and reefs. It is a Venezuelan National Park. 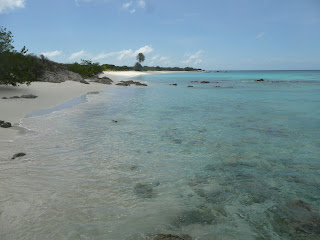 We threaded our way through the deep water channels between the islands to the anchorage at Noronsquis. Three little islands and a barrier reef enclose a deep blue lagoon with several pretty white beaches. Over the reef El Gran Roque made a pretty picture. We stayed there for two nights; eating, swimming, snorkeling, kyacking and exploring the little islands. 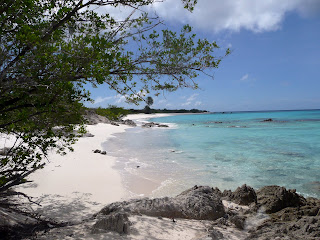 At 3 PM on Tuesday we carefully threaded our way out the channel and headed east again, passing close to Gran Roque. The hills there are 360 feet high and rugged. It's the only island in the archipeligo that has a village. There are no cars: people arrive by boat and plane. That's it above left. Our next destination was Blanquilla, 120 miles east, another overnight passage. 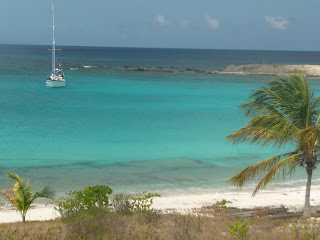 The seas were rougher, confused by the north swells and wind chop, but it was a clear bright night with no squalls. We saw almost no boats but Russ had some excitement on his watch as we passed Ochilla. It's a military base and we stayed clear of the boundaries set up on our charts. They were conducting bombing runs with flares and planes - practice only of course, but pretty exciting for Russ! 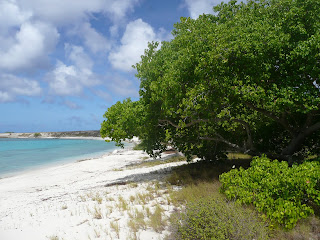 Blanquilla is very low lying but we could easily see the Los Hermanos Rocks far beyond - six of them, one 600 feet high and coming straight up out of the sea. We anchored off a pristine white beach snuggled in between two rocky reefs. It's a one boat anchorage and very protected. 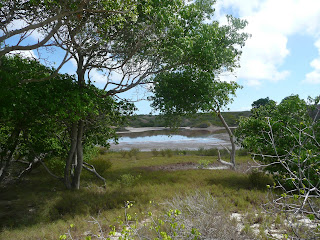 A little further to the south were several other sailboats anchored off Playa Yaque beach and it's distinctive two palm trees. We had two relaxing nights here as well. Our second day we very carefully motored north in our dinghy to Americano Bay. With three of us in the dinghy and choppy seas it felt a bit precarious. 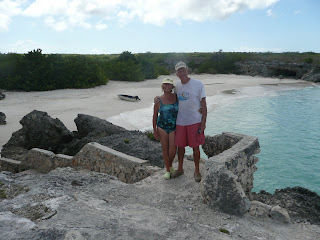 I'm going to digress a bit here and talk about our dinghy choice. Most people have a rigid inflatable. We've had our 10 foot Port-A-Boat now for five years and it shows it. Scott has reinforced the stern with plywood and replaced the seats. He designed a bumper of navy blue sunbrella material which fits over the top edges on both sides too. 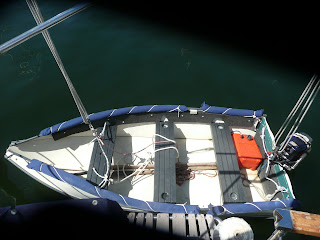 It is a very unique looking dinghy and has provoked many comments but is an unlikely target for thieves as a result. We haul it up on the dinghy davits every evening so it's comparitive lightness is a boon. And when it's just the two of us the also light 9 horsepower engine gets it up on a nice plane. It is very roomy and can hold a lot of provisions or all our diving gear. 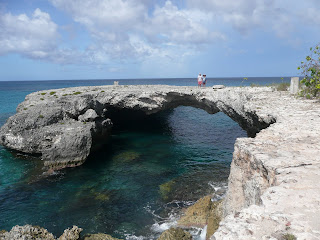 So on the whole we've been happy with it and will be buying a new one and having it shipped to Trinidad this winter.
Back to Americano Bay. It was named for an American, Mr. Blankenship, who built a little house here, now in ruins. He came by private plane, landing on a dirt strip nearby. Rocky cliffs enclose a small bay with a lovely white beach. On one side are dramatic caves and on the other a large arch. 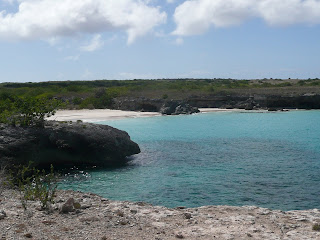 We could cross over the arch to a small still obvious patio with a outdoor fireplace. It was hot in the sun so we were glad to slip into the cool water and snorkel around the cliffs and under the arch. The landscape above reflected the one below, with many holes and even arches under the very clear water. There were lots of fish and very healthy coral. 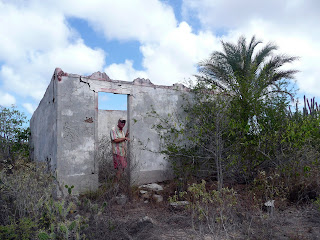 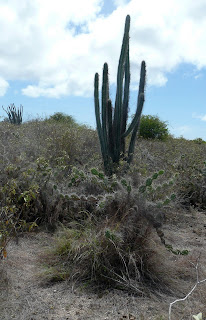 We explored the ruins, imagining how it must have looked when still occupied. It is certainly a fabulously beautiful spot. The beaches here and near our anchorage are pristine and very white - none of the trash we've seen many other places.
The next day we explored the beaches and land around our anchorage. There are two small ruined houses around a small almost dry pond. We didn't get close enough to find out if it was fresh, but there must have been water somewhere for these homes to have been occupied. The cactus were everywhere, including on us! We learned the hard way about jumping cactus. Balls of spiny cactus attach themselves to your skin and are very difficult to remove. As soon as you pull one spine out (your skin stretches out as there are little hooks in the end) two more spines grab hold. Painfull! Luckily we had a doctor with us!
Posted by Scott Garren and Heather Shay at 12:27 PM