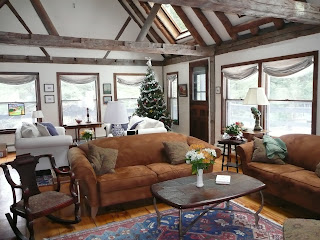 I've included some views of our new home here. That's several angles of the living room and our Christmas tree. Our grandchildren named it "The Hundred Acre Wood", being all huge Winnie the Pooh fans. We've had the whitest November and December in years. The skiing has been great but we can cross country or snow shoe right from our door too. That's Daniel skiing with Josh on the right. Not long after this shot he was skiing on his own - and did an intermediate slope before the week was out. 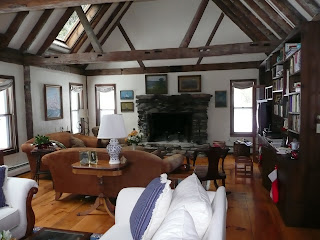 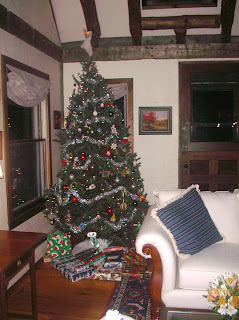 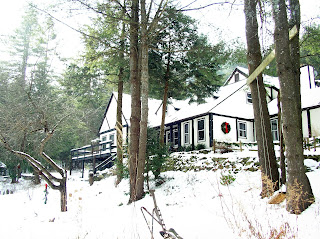 We were lucky to have all three sons home for Christmas. James took the bus from NYC and met us in Boston on Saturday the 22nd. for our Holiday Open House - this year at our friends the Wolfs in Concord (see my previous Blog entry). Sean flew from Aspen later that night, where he was attending a training session for work. We four drove home to Vermont Sunday morning. Josh, Michal and our three grandchildren joined us on Christmas day. We had a huge prime rib roast beef for dinner that night and even my three sons couldn't finish it! 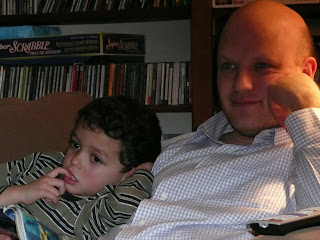 We watched a lot of movies over the week. Disney's animated "Robin Hood" and the classic "Winnie the Pooh" were the favorites of all. Somewhat more adult favorites were mostly sequels, "Harry Potter", "Spiderman", "Bourne Ultimate" etc. That's Josh with Daniel with a tense bit of something and Ariella in her leopard pjs! 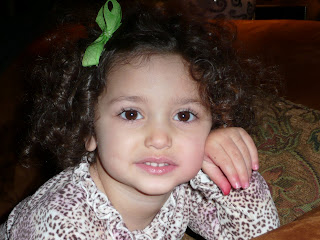 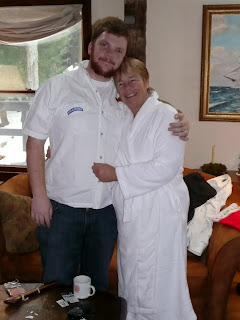 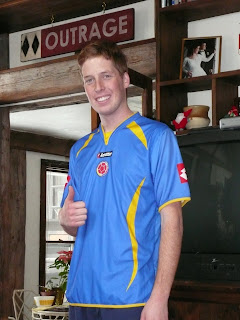 We still do stockings for the two youngest boys with mostly chocolate, DVDs and books this year. There was still one toy each - matching radio controlled helicopters that dueled all over our high ceiling living room. That's Sean in his Columbian soccor shirt and James with me, dressed in the fluffiest white bathrobe he gave me. Hits with the grandchildren were toys, toys and toys - plus books and DVDs - no clothes please! 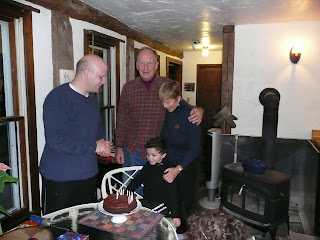 On December 27 Daniel celebrated his fifth birthday. He chose a chocolate on chocolate cake combination (we made it) and decorated it with candles - great with lots of ice cream.
Posted by Scott Garren and Heather Shay at 3:47 PM 0 comments 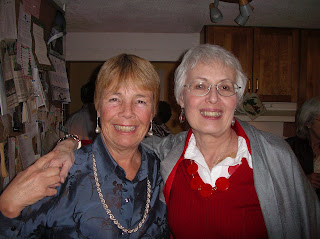 That's son James and Jennie, the Wolf's oldest daughter on the left with Pam Pinsky and myself on the right. 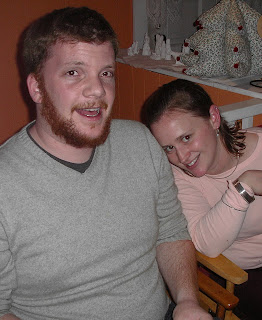 Below left (left to right) is Carole Sharoff, Gene Brzek, his son Brian and wife Julie. On the right below is Debbie D'Arpa and Marty Wolf (on the right). Below that on the left is Bill Fonvielle and Susan Youmans. 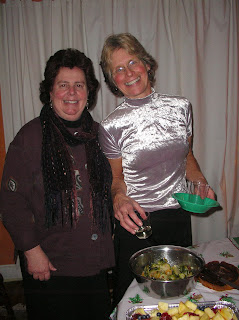 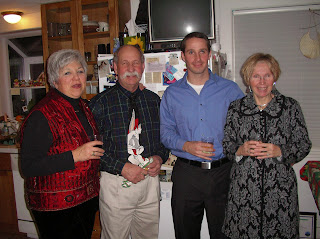 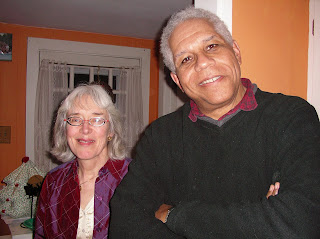 In 1969 Heather had her first Holiday Open House with her roommate Juanita Head on Marlboro St. in Boston. Their second was at a new apartment on Newbury Street. Later it continued there with her next roommate Karen Dunn and even later with successor Kathy Herald. In 1976 Heather bought one of the first condos for sale in Boston at 311 Commonwealth Ave. and the party moved there first with Kathy and then with Scott. After their marriage they bought a Victorian in Brookline and for 23 years we had the annual event there. 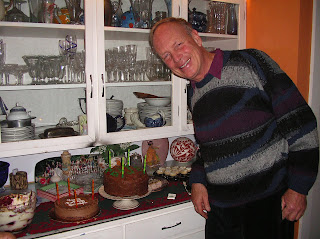 In the early days we made the ornaments for the tree at the party and those ornaments still hang on our present tree, bringing back some wonderful memories. At first also we were almost all single and childless. Then spouses and children joined us and every year we all got older. Our oldest son Joshua now has given us the next generation!
When we sold our Brookline home and bought "Scott Free" several friends volunteered to host the party at their home. Karen Martin (my ex-roommate and cohostess years before, Karen Dunn) and her husband Ted hosted the first two new Holiday Open Houses in their beautiful home in Winchester, MA. This year for the second time Russ and Marty Wolf have been our hosts in Concord, MA. The guest list is pretty much the same but it's so much more fun for Scott and I. We now plan, cook and decorate with great friends. 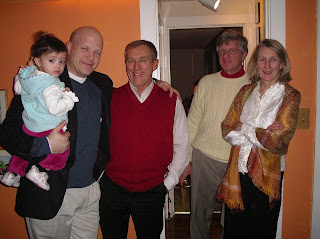 From left to right on the left is Josh with Maya, Russ Wolf, and Karen & Ted Martin. Below right is Julie Wolf reading to Ariella. 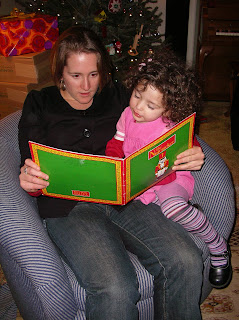 This year, like many in the past, coincided with Scott's birthday, his 60th. Unfortunately a northeaster storm was also predicted to share the date - a big one. For the first time ever we postponed the party a week! We still had a cake for Scott - along with a groaning table of other desserts. Of course these followed the appetisers, turkey, ham, salads, veggies, pasta, and meatballs & sausage & sauce.
Posted by Scott Garren and Heather Shay at 5:50 PM 0 comments 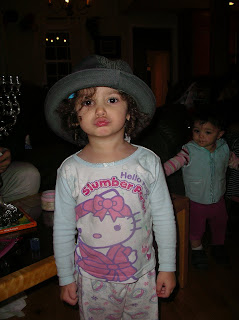 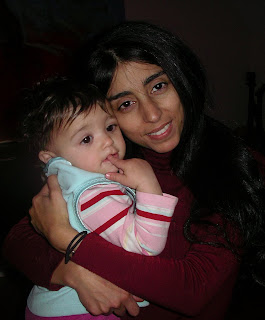 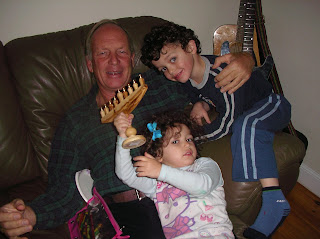 A few images here from the first night of Hanukah with our oldest son Josh and his family. That's Michal with the youngest, Maya on the top left and Ariella with her father's hat on the top right. Scott's on the right with Ariella and Daniel. Below that Josh is lighting the first candle on the menorah (one of many, including one Daniel made in school). We feel very lucky that we get to celebrate two December holidays - next will be Christmas! 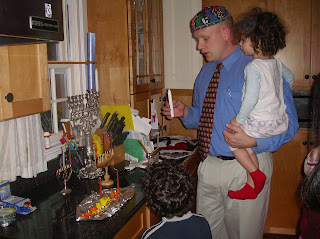 Posted by Scott Garren and Heather Shay at 3:37 PM 0 comments

Email ThisBlogThis!Share to TwitterShare to FacebookShare to Pinterest
Labels: Boston

Thanksgiving at Plymouth and Vermont 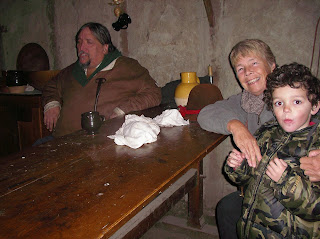 After flying home on November 16th we stayed with our oldest son Joshua and his family - wife Michal, Daniel 4, Ariel 3, and Maya 1 in Newton, MA. He is a radiation oncologist at Lahey Clinic.
We went down to the Plimouth Plantation, a recreation of the original settlement and an Indian village like the one which would have been nearby. Volunteers play the parts of both the settlers and the native Americans and answer questions from the visitors. Our older two grandchilren were fascinated by the people, their stories and the way they lived. This was particularily interesting to all of us because I am directly descended from one of the original settlers who arrived on the Mayflower - Stephen Hopkins. That's "him" on the right here with Daniel and myself. 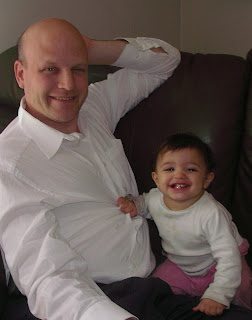 That's a shot of the plantation below and on the left Joshua and Maya. Further down is Michal with Daniel and Ariel in one of the Indian tents. My sister Paula from Maryland took the train up to spend time with us through Thanksgiving and both our younger sons arrived together in a rented car. Scott's brother Brent, his wife and daughter all joined us too for Thanksgiving. 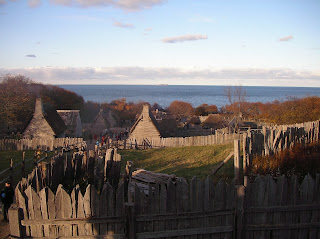 Counting a friend of Sean's from Dartmouth, we were 14 over the weekend and happily our new home can accomodate everyone!
I made two turkeys, tons of stuffing, squash, mashed potatoes, green beans, turnip, and gravy with apple and pecan pies for dessert. Scott and I put ourselves on a much needed diet after everyone left! 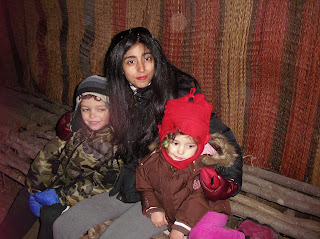 That's our second son James surprised in the act of eating by the camera followed below left by Sean with his friend Roe from Taiwan. Last is my sister Paula with Daniel and Ariel. The weather has been very unusual this year. It has been the whitest fall (winter doesn't officially start until December 21st!) for many years. 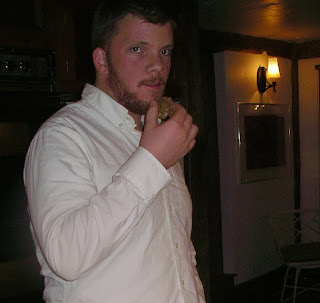 Okemo Resort where I teach skiing opened mid November and the snow just kept coming.
Daniel is already skiing, stopping and turning by himself. We had a fun day cheering him on. Ariella has been coming along in a backpack on Joshua. All three of our sons have taught skiing at Okemo at one time; James for many years. I've put in my clinic days and several days teaching but holiday activities have kept me from working a lot.
James now works for Binder & Binder in NYC representing clients applying for social security disability in court. Our youngest Sean is in Washington working on Clean Energy policy issues with the national office of the Public Interest Research Group (PIRG).
Our daughter Zoe, a Child and Family Counselor, is in California with her husband George and sons Nicholas 4 and Tommy 1. We'll be visiting them for 10 days in January - spending three days skiing and boarding at Heavenly Valley at Lake Tahoe. 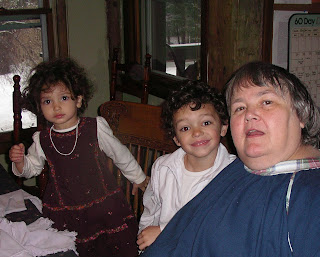 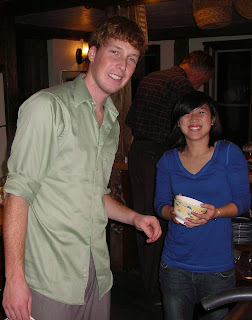 Posted by Scott Garren and Heather Shay at 4:23 PM 0 comments