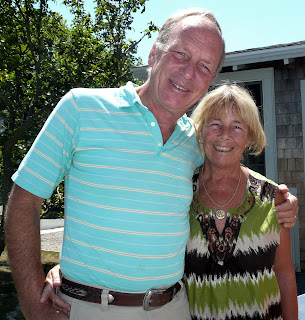 Our good friends Harvey and Gail Smith have a beautiful family "cottage" in Gloucester, Mass. on the private section of Good Harbor Beach. We've enjoyed countless wonderful times there over the years and try to get back every summer. This year we could only make it for a couple of days but as always they were memorable. We lucked out on the weather as well with clear sunny warm days. My mother always said that it could be hot as Hades anywhere else in the area but on their front porch overlooking Salt Island, it was always heaven.


That's the view above left and us on the back porch. Harvey and Gail have two children, Colin and Leslie, and the former is my godson. Happily they came down from Vermont too! That's them right with a copy of New England Lighthouses and Harvey, Gail and Colin next on the left. As always we walked on the beaches and this time through the down town. There are a lot more attractive restaurants and galleries than on our last visit. Our second night was a special treat. They got tickets for all of us on a Thatcher Island Association Benefit Cruise to see the nearby lighthouses.

Bill Fonvielle and Carol Sharoff joined us for the cruise. They too live in Gloucester, in their case full time. Carol owns Atlantic Vacation Homes Realty Company (atlanticvacationhomes.com) and it keeps her hopping. You can rent a home for a week or season with them, or buy/sell a house. Bill is a private management consultant but he and their son Jonathan all help out at times with the business. We've known them for a long time as well. That's them next below on the right. 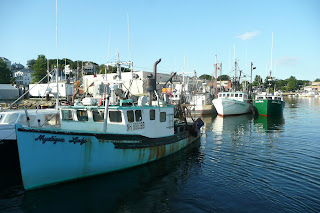 Gloucester is a marvelous combination of working fishing town and resort. There are still lots of professional fishing boats everywhere alongside the yachts and racing boats. Gordon's Fish Packing Company is still downtown and the Quarter Deck Bar made famous in the Perfect Storm hasn't been gentrified. 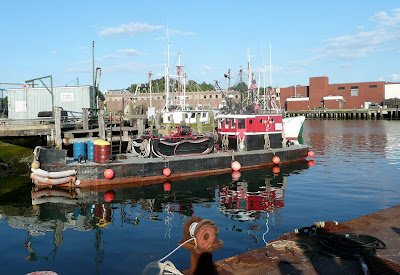 It was a lovely night on the ocean, warm enough for a change to forgo a jacket, if not a sweater. We and most of the others stayed outside the whole evening. Our ship normally is a whale watching boat and had lots of room. It was possible to buy drinks, hot dogs and snacks - although we were sorry we didn't think to bring food with us! Most people did.
Our first lighthouse was on Ten Pound Island within Gloucester Harbor. Most people think the name represents the money given to the Indians for purchase, but historians believe it was named after the number of sheep pens (known as pounds) there. These were reserved for "rams onlie"! Guess they needed an ocean to keep them away from the ewes! In 1871 several witnesses saw a sea serpent pass the island with a head as large as a dog held 10-12 feet above the water.
Artist Winslow Homer spent the summer here boarding with the keeper in 1880 and painted over 50 scenes of Gloucester!


The lighthouse was built in 1821 and later rebuilt in 1881 and in 1925 it became a Coast Guard Air Station with 1 small scout plane and 2 amfibious ones. The lighthouse was decommissioned in 1956 and restored in the 1980's.
Next was the Eastern Point Lighthouse at the beginning of the breakwater. This is at the end of Eastern Point and not on an island. It was first built in 1832 of stone and then again in 1848 higher. It originally had a "ruby light" but when the present brick 36' structure was built in 1890 it became white. The keeper's house is still in use. Two Coast Guard families live there now. The last keeper, till it was decommissioned in 1985, lived there with his wife, dog, cockadoo named Sinbad and two cats.

Thacher Island is a National Historic Landmark and the most interesting. The island is 50 acres and has a number of building besides the twin lighthouses. They were the last twins still lit when the north tower was darkened in 1932. Once there were 7 twin lighthouses and one triple on the east coast! Today the north tower is lit again by private donations and is amber colored.

The island was first visited by Europeans Samuel de Champlain in 1605 and then again by John Smith in 1614. IN 1635 the ship "Watch and Wait" was wrecked in a terrible storm there and 21 people died. Anthony Thacher and his wife were one of the few to survive. He lost 4 children by a previous wife and his cousin, his wife and 6 children in the wreck. He was awarded the island by the courts as recompense and it remained in the family for 80 years.


In 1771 twin 45' towers were constructed, called locally Ann's Eyes. It was run a bit like a farm with cattle, sheep and an orchard. In 1864 Keeper Bray left in the winter with a sick assistant and the other assistant to help him, leaving his wife Maria and her 14 year old nephew on the island. A big snowstorm hit isolating them for several days. Maria with some help from the boy never let the lights go out in either tower. In high winds and heavy snow she/they climbed 148 steps in each three times a night to keep the lights burning. It is still talked about today and made her quite a heroine then.
We had a excellent narrator, author of a book on N.E. Lighthouses, on board to entertain us with the histories of each place. Some of those stories I'm repeating here. Our next stop (the boat did a 360 degree turn at each lighthouse to give every one on board a good look) was Straitsmouth Island light, still flashing green, built in 1835 and rebuilt twice again in 1851 and 1896. The 1878 keeper's house is still there but falling down. The island belongs to the Mass. Audabon Society who are more concerned with it's being a bird sanctuary.

Our last lighthouse was the Annisquam Light. This is located at the north end of the estuary, open at both ends and called the Annisquam River, which separates Gloucester, Rockport and Annisquam from the mainland. It was first built in 1801 with the current brick light built in 1897 and a Coast Guard family still lives in the original wood frame Keeper's house. 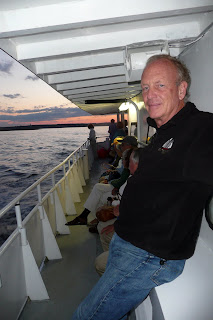 Scott and I have sailed our "Scott Free" past these lights five times but always in good weather. Even then the lighthouse beacons are a friendly presence in the night or the towers a marvelous view shining in the sun. 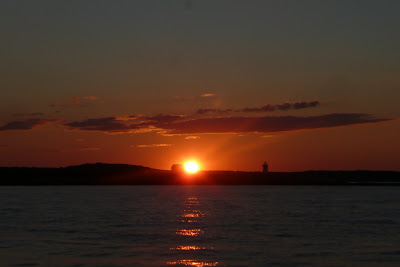 Posted by Scott Garren and Heather Shay at 3:26 PM 0 comments