Our first summer in Maine 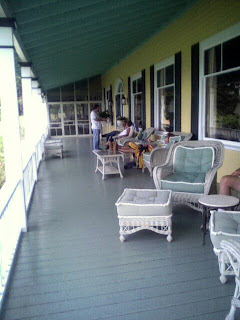 We set off again north directly this time to the Isle of Shoals on July 16. As we did last time with the Smiths we picked up a mooring and hoped no one would come to claim it in the middle of the night. Gosport Harbor isn't a good place to anchor. We didn't get off the boat this time.
Our next stop was Wood Island Harbour at Biddeford Pool, Maine. What a great spot, although it was a challenge to anchor (only our second time?). Portland, Maine, our next destination, wasn't far so we left after lunch and were moored at Portland Yacht Services at 4:45PM. On the way we passed Jane & John Moore sailing south on their boat and talked to them on the VHF. Another coincidence. 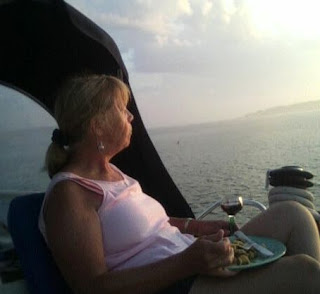 Two days later we sailed through Casco Bay and picked up a mooring off the Chebegue Hotel on Chebegue Island. The Bagnells and ourselves had stayed out there for a three day weekend when the kids were young and had a memorable time. That's the front porch above. After exploring we sailed around the island when a big thunderstorm threatened. A spare mooring at Central Landing on Great Chebegue island proved a 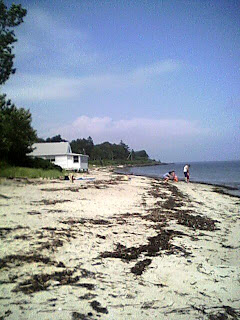 great place to weather the storm but after it departed, so did we. Our anchorage for the night was Chandler Harbor and it was nice to be settled in there before sundown. The next morning we were fogged in but by 11:15 it was clear enough to start off.
Jewell Harbor was on everyone's list of must sees, so we anchored there for a late lunch and walk around the island - truely a beautiful spot. This is a State Park and has cement towers used during WWII to watch for submarines. Unfortunately we had a time schedule to follow and couldn't stay the night. We pressed on to Falmouth Foreside's moorings. 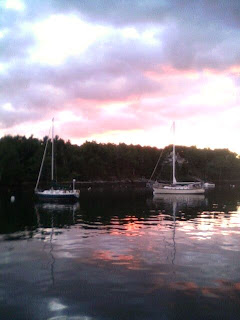 The next day we motored slowly through pea soup fog to Portland again. We couldn't see a thing but navigated by the auto pilot, radar and careful listening. What an eerie experience! We stayed one night and then in poor visability passed Halfway Rock on our way to Sebasco harbor. Next in cloudy, rainy conditions we turned around Cape Small, off Hendrick's Head and finally to Ebencook Harbor. This is where we picked up "Scott Free" last year. The sun came out and it was a beautiful night. It's a short hop around to Boothbay Harbor and we spent a few nights enjoying this busy scenic spot. I spent many days here on vacation with my parents and Uncle 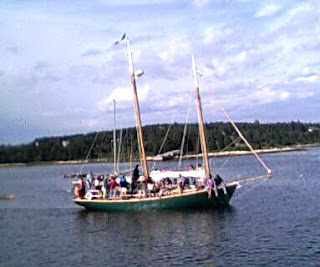 Morton and Auntie Berta on their boat. Our friends Wendy & John Padgett and their two children Ray & Olivia live in Bristol so we spent two nights in Christmas Cove and two nights at Round Pond visiting them. We had dinner with them at their home and at Coveside - an old favorite from many years visiting them. Our mooring in Round Pond is a free one kept for visitors - very friendly. The Padgetts came on 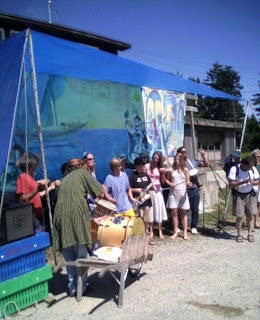 board for lunch at our mooring and John, Olivia and Ray decided to sail north with us to Camden. Unfortunately the seas were confused and the wind picked up, gusting to 28 knots. Ray got really sea sick and Olivia some, so we turned into Port Clyde instead. This was a rolly harbor but a clear night. The next day was beautiful and clear. We had to motor around to Camden. Our time was getting short now. We were meeting Bob Defeyter in Burnt Coat Harbor on Swan's Island for the Music Festival in two days. So next morning we sailed off Egg Rock, North Haven, off Green Ledge, under the bridge and anchored in Benjamin River, a beautiful rural quiet anchorage. 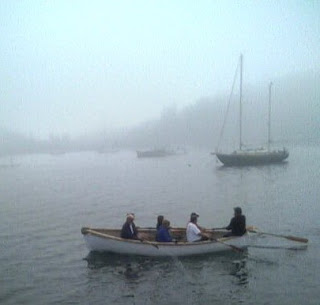 The next day started sunny but soon the pea soup fog rolled in. It is remarkable that we could continue slowly manuvering our way through the multitude of channels, rocks and islands without being able to see a thing. Navigation is with the auto pilot, radar, listening to the conversations of the other boats on the VHF, and to the other boats horns calling around us. We stayed two nights and managed to get tickets to see the show at night and the free one in the afternoon. 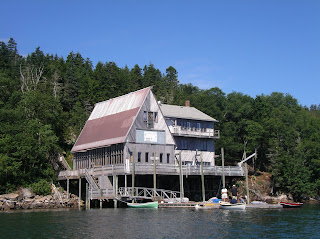 We'd been to this before with Bob DeFeyter on his boat and loved it. Besides the evening concerts, there is an afternoon trip round the harbor by a old schooner with musicians jamming aboard (that's it three photos above)- sea chantys of course! One afternoon there is a free concert on the beach (photo above right, also shows the mural). And through it all the resident artist paints a huge mural of the sea/shore, different each year. The 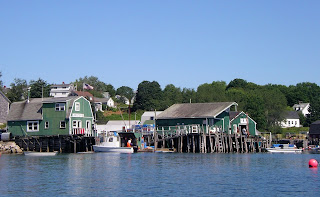 musicians come from all over the world and many have been here every year for maybe 30 years. Their children are now performing! The yacht club where we came ashore is above right.
Our next planned event was the Seven Seas Cruising Association's GAM at Islesboro. It followed right after the Music Festival. The GAM was a lot of fun. Anchoring safely while under the scrutiny of everyone in a crowded harbor was the first challenge. Luckily we arrived the day before the GAM started - others arriving the next day provided more entertainment. 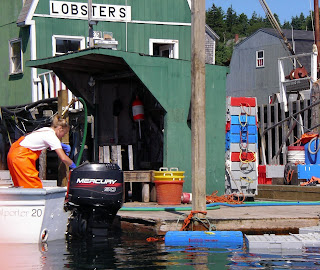 Our first morning our neighbors Larry and Leslie Sturzenberger on "Algonquin" invited us over for hot morning muffins. This was our first glimpse of cruising hospitality. That night was the welcoming cocktail party - a dinghy raftup with at least 40 boats participating. Passing the hors d'oeuves around from boat to boat while holding drinks was the second big challenge!
Sunday was a big pot luck, talks from experienced sailors and members, and of course, a yard sale. We met many cruisers, several of whom we would see again in far flung ports. 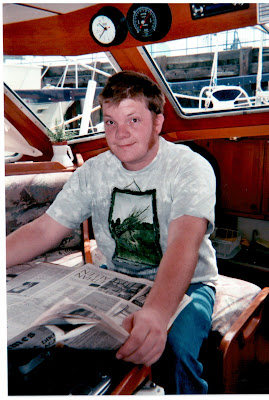 After this it was time to start south. We spent one night in Boothbay, and the next day sailing close reach in 15-20 knots with big rollers following us, our dinghy broke off from the davits and went under water with the outboard on it. We stopped and Scott managed to right it and pump it out. The motor needed additional help fast and Portland wasn't far. We made in to the Portland Yacht Services and they put it in a fresh water tank. The next day we got it back running, but it was never the same and a pain in the ass for the rest of it's life. 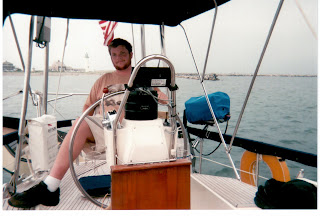 We spent one night in Biddeford Pool, another at the Isle of Shoals and then were back in Glochester. James joined us there for some vacation. The three of us sailed to Provincetown and spent a few days exploring the town. What fun! It was a special weekend for transvestites with a parade. Next we had a very brisk sail to Scituate for a night before returning to our marina in East Boston.
Posted by Scott Garren and Heather Shay at 11:36 AM 0 comments

Sailing with the Smiths 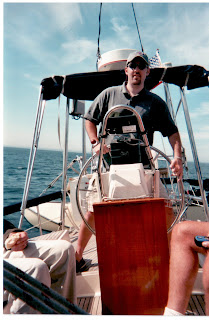 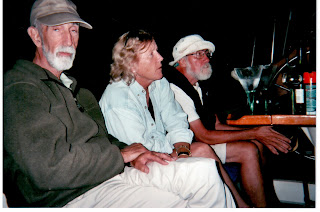 From Scituate we sailed north to Glochester and picked up a mooring at the Eastern Point Yacht Club. That's a shot from our boat to the point with it's lovely lighthouse. Our very close friends Harvey and Gail Smith live there in the summers and it's a favorite spot of ours. We'd arrived on July 3 and hosted all the Smiths, Fonvielles, Jeanne, Ravi and Sunjay Dhama for a July 4th dinner and fireworks. That's Leslie and boyfriend Chaz below. Originally we'd planned to motor in to the inner harbor but once everyone was on board it was late and dark. 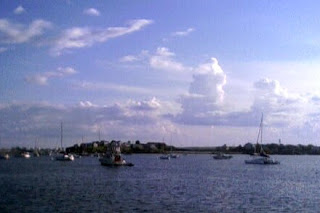 Navigating in the dark with a big group of people on board was too scary. So we sat at the mooring and watched a line of fireworks displays down the coast towards Boston. There must have been six towns visable! Naturally the food and company were great!
We went in to Brown's Marina for fuel (this picture shows the shoreline as we get near the inner harbor and had a great day sail with Harvey, Gail and Colin the next 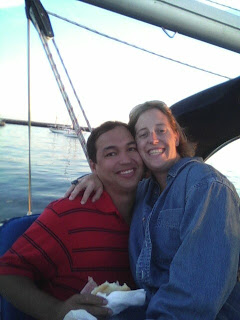 day. Harvey and Gail then joined us as we sailed north around Cape Ann up to the Isles of Shoals. Our first night we picked up a mooring in Rockport off Motif #1. Then on to the Isle of Shoals. This tiny group of islands has several small homes and the big old Oceanic Hotel, established in the 19C and now used for religious retreats. They welcome the public to look around and eat dinner by reservation. 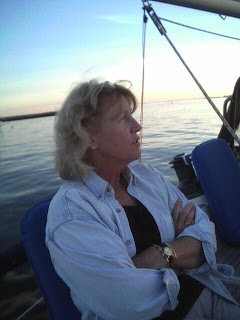 Nearby Appledore Island is a summer teaching and research center run by Cornell University. The biggest of the islands, it was once the home of poet Celia Thaxter. We toured the center and the island. Smuttynose Island is has two fishing cottages and a ranger to loan you a booklet for a self guided tour around the island. The restored Haley House next to the Ranger office is said to be one of the oldest in Maine. Legends of pirates and smuggling hang around these islands and a famous murder occurred here as well. It is impossible to anchor there due to a fouled bottom but the moorings, put down by several N.H. Yacht Clubs, can be used if available. 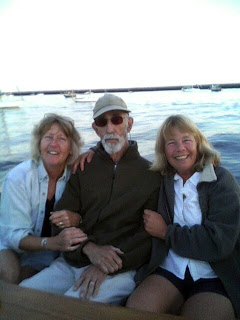 From there we crossed over to the mainland and up the Piscataqua River into Portsmouth. This is a charming old city, recently considerable restored. Unfortunately the dock at Prescott Park was full so we went past the draw bridge where we found a available slip, right downtown. In the afternoon we toured Strawberry Banke, a collection of 30 historical structures all restored and open. That night we saw a musical production at the local theater followed by great folk music at a historic tavern. Fabulous! And, no advance planning. 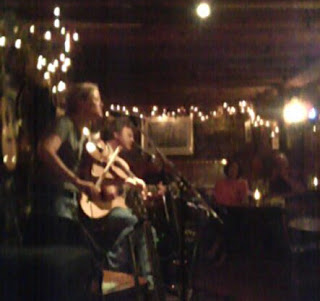 The next morning the river was churning with a 3-4 knot current sweeping down under the bridge, only 200 feet from our dock. Oh boy did we angst! We pulled the boat as far down the dock as it would go and tested the engine before we cast off. Scott barely made it on board as we surged off and away from the bridge. Far enough off, we called the bridge tender for an opening. 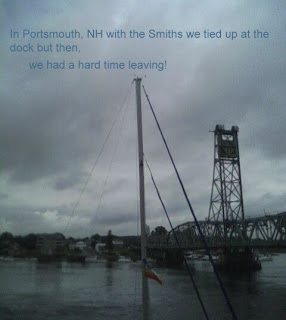 The bridge slowly began to rise. I didn't want to get too far away so I circled around while we watched. Time went by. The bridge tender got on the VHF; "You're making me dizzy! What are you waiting for?"
Scott came back nervously; "We have a 63' mast. Is there clearance?
"Oh I think so...the bridge is 120' up!", he replied with a laugh.
The rest of our cruise was uneventful but lovely. We returned to Glochester and tied up at Brown's Boat Yard for some repairs. During these five days we had rigging work done and new instruments installed. Heather striped the railing and Scott installed a new refrigerator. The boat was a mess as you can see below, but happily we were able to stay with the Smiths in comfort. Once completed we set sail again, this time north to Maine. 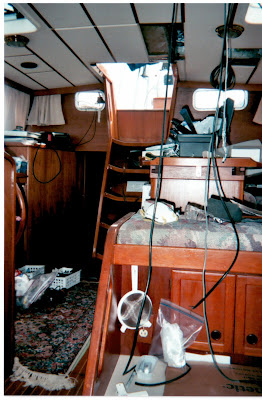 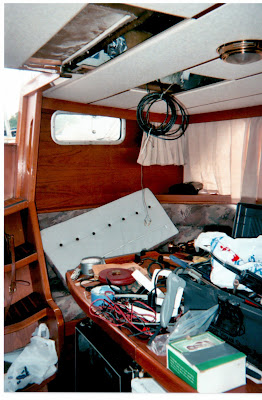 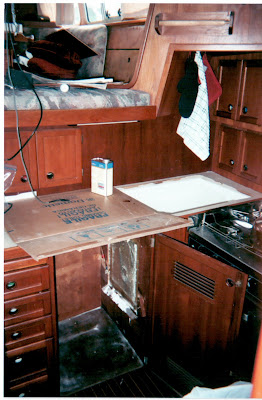 Posted by Scott Garren and Heather Shay at 3:06 PM 0 comments