Beautiful Bonaire for a while! 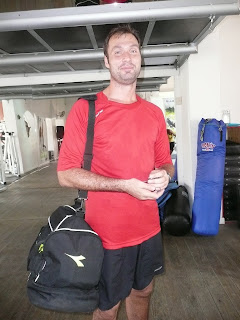 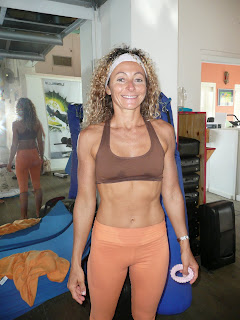 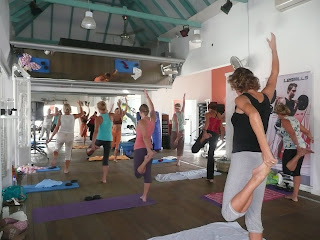 We feel very much at home here in Bonaire. We have friends that live on the island and there are usually several boats we know moored near us. At "our" health club Fritz the owner welcomes us and Valerie "Frenchie", my instructor and Scott's personal trainer, beats us into shape every other day. Here's a view of my Body Balance class from the rear. The club is in an old Dutch style architecture building downtown. That's Fritz above left, Valerie above right. 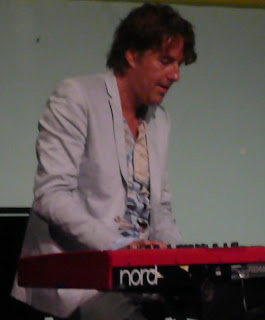 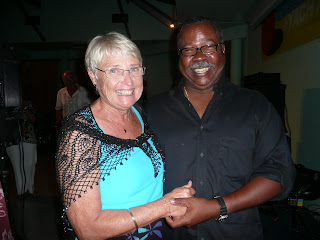 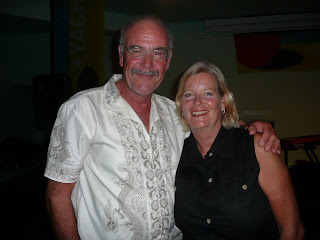 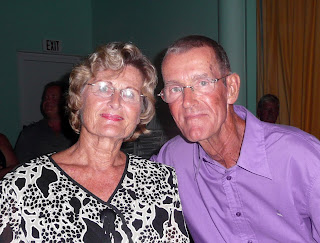 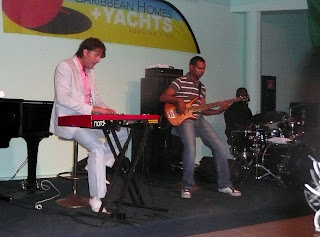 Bob and Barbara Gilmour, formerly on "Enkidu", whom we've known since Trinidad have fed us at their beautiful condo several times and with them we've eaten out and attended music events - all in two weeks!
Last Saturday we saw Dutch Jazz Pianist Michiel Borstlap perform with some talented local musicians. He played a long marvelous solo piece on the grand piano, recently purchased for concerts on the island, followed by some terrific ensemble pieces. We picked up pizzas before and ate out on Bob and Barbara's balconey overlooking the coast of Bonaire. Other Dutch friends Maita & Ood (below left), and Margaret & Hans (below right) were also there. I've known Maita and Margaret for years now through exercise classes. Hans is a talented pianist as well and kindly gave us one of his CDs which we have enjoyed immensely. That's Barbara with the drummer above.
We've been diving almost every day. It's very easy to do here. We have the tanks refilled only 200 yards away. The diving is excellent right off the back of our boat. We've seen hundreds of different kinds of fish, turtles, manta rays, eels and of course a huge variety of coral and vegetation. It is a different world down there. I feel like I've entered a science fiction movie and I'm visiting another planet.
Yesterday we went down to the camera set up 50 feet down which continuously shows the reef and fish of Bonaire to the world on the internet - and the occasional diver. We had a date to say hello to the 5th grade class at Mt. Holly Elementary School in Vermont. In September we visited them to talk about weather and maps. Important elements to sailors. Other days we dinghy over to one of the 50+ dive sites around the area. It's pretty easy to get in and out of our dinghy, even with all that gear on!
Halloween will be celebrated here on the island in style. It's a popular holiday all through the Caribbean. Every one has put up decorations. That's Bob and Barbara with Scott posing with a witch. Another one is flying up on a balconey.
This morning at 5:10 AM our very good friend Russ Wolf (shown at the bottom here) arrived by plane. Scott took our dinghy down to the airport to meet him. Imagine walking out of the airport to a dock and taking the dinghy back down the coast to our boat as the sun painted the sky and clouds pink. 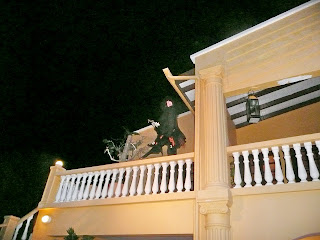 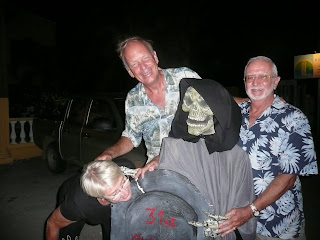 We had coffee and Russ had a swim. Later we sat at our favorite breakfast spot "It Rains Fishes" and had a huge breakfast. Bob & Barbara lent us their car for awhile this morning so Scott could show Russ around the island. We're letting go of the mooring around 4 PM this afternoon and sailing (more probably motoring) east overnight to Los Roques. Our trip to Trinidad will most likely take around 10 days. Russ is flying home from there on 11/13. They'll be four overnight passages with a couple of days in each island group between. Our float plan is to stop in Los Roques, Blanquilla, Los Testigos and Trinidad. We did this trip in reverse in April 2007. You can click on the 4/1 - 5/1 2007 link over on the left to see pictures of these islands. 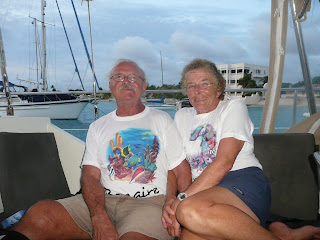 This last picture shows Tom and Bonnie on "Toujours" our neighboring boat here who we will sadly be leaving. They are on their way west to Cartagena. We had several lovely evenings on each other's boats.
Posted by Scott Garren and Heather Shay at 1:13 PM 0 comments 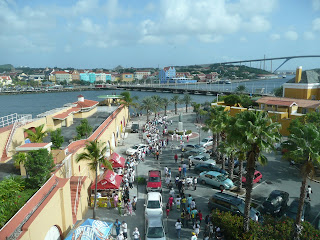 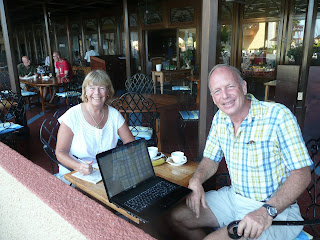 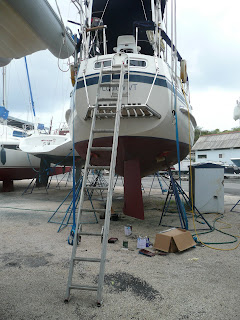 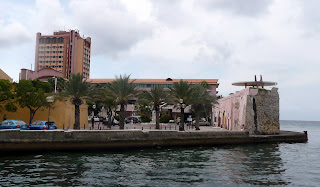 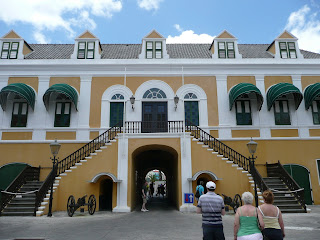 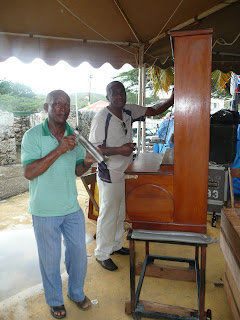 A series of dance groups performed traditional dances. They asked for a volunteer to turn the cylinder for one dance and of course Scott was up there in a minute. He is so tall that in order to keep his back straight, he had to bend his knees - up and down to the beat. The crowd loved him. One dance group pulled up members of the audience to dance - very sexy moves! Both of us were chosen and did solo dances with our partners for the audience. Of course Scott was hysterical. Honestly, I was in tears laughing. Later when he won the grand prize everyone was delighted; a nice cloth cooler bag with a radio filled with gifts - a hat, three china traditional houses and a china Ka'i Orgel, DVD on Curacao and a hot/cold vacum cup. They served traditional foods as well - goat stew, rice, green beans & beets, and plantains. It marvelous luck to come upon it.
Posted by Scott Garren and Heather Shay at 5:51 PM 0 comments