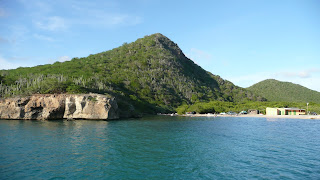 This has been an interesting week, as in "May you live in interesting times!" We motored over from Aruba on Saturday and spent the evening in Santa Cruz Bay, a small harbor in the northwest of Curacao. This is a lovely spot with a pretty white beach set up with perigolas and thatched roofed tables for day and overnight campers and a small dive shop/restaurant. Thirty foot cliffs line the sides of the bay and a small creek meanders up around the corner with a few small fishing boats. We had stopped here for a night on our way west last fall. It was a quiet lovely evening with a spectacular sunset. We thought about spending a second night but one of our weather reports mentioned a possible wind reversal coming (that means the normal east/northeast trade winds turning west) and the mouth of this harbor faced west. If you are between the wind and the shore that's called trouble.

So after a lovely snorkel and swim we motored down the pretty coast of Curacao to the narrow winding passage in to the big lagoon called Spaase Waters, the major anchoring spot here in Curacao. It was packed with over a hundred boats! This made it difficult to find a good anchoring spot. As everyone would be turning 180 degrees soon with the wind change we decided to plunk ourselves down in one of the channels and move in the morning. The next morning's weather forcast mentioned the wind reversal with a spike in expected amount - up to 15 to 20 possible. We decided we'd better stay put until this passed and happily old friends Brad and Gloria on "Kindred Spirit" volunteered to take us around to Customs and Immigration in their rented car. We ended up spending the day with them shopping and having a great lunch out.

When we returned it just seemed late to reanchor and other friends Jeff and Una on "Dragonfly" were coming over for drinks. It turned out to be a smart decision. That night the shit hit the fan! Around midnight I heard the wind start to howl. I got up to close everything down and suddenly the boat began to shake. Steady winds up into the high 40's and driving rain moved in. The anchorage came alive. Scott had just joined me when we saw a catamarin in front of us come loose and head towards our neighbor - a fabulous vintage 53' yacht. 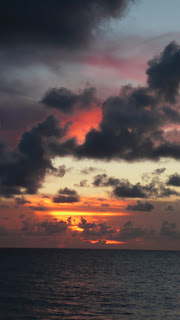 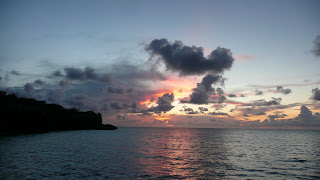 We got our air horn out and blasted it. Just in time the captain of the cat managed to motor forward and avert collusion. He reanchored but not for long and they weren't the only ones coming free.
We were extremely lucky we were in the channel and further away from another boat. Ours sails around alot in heavy winds as we have a lot of freeboard. We were able to let out more chain and hang on. The rest of the night was scary and sleepless.
Everyone was tuned into weather the next morning. Now to be fair, Chris, our weather guru, had said there were possible squalls with gusts up to 50 knots, but he'd been saying that for a week and this wasn't just a squall.
Suddenly it was TD15 (Tropical Depression) and hanging around northwest of us, moving our way slowly. We had another day and night of this ahead - yeech! Scott reinforced our anchoring strength by lowering our second anchor on a line with a loop over our other anchor chain. This puts the two anchors in a parallel position and adds to our holding capacity without adding more scope (not possible to do with the number of boats around us). It was tough to do in the wind and rain but happily he's a big guy (these anchors weigh 75 lbs). 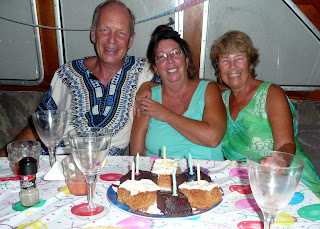 It was another 24 hours before we had some relief. We took turns getting as much sleep as we could. Many boats left to find more secluded anchoring spots elsewhere in the lagoon and happily that left us with the most solidly fixed ones around us. Everyone shared information and weather over the VHF radio as our TD15 turned into a Tropical Storm Omar and then Hurricane Omar. AND it was still moving slowly towards us! All predictions called for it to change direction and move NE but it stubbornly refused to follow directions. Finally in the early morning hours the word came out, "It turned!" Yeh! Relief was mixed for all with the knowledge it was now headed for the Virgin Islands area where other nervous boaters sat over their radios.
As we are in a landlocked lagoon we did not have to deal with high waves. Our friends in Bonaire however are exposed from the west. All the docks and several boats were destroyed there, and beaches washed away. Any water front structures were damaged or destroyed. Most of the cruising boats were able to pack into the one marina and were safe there thank goodness. 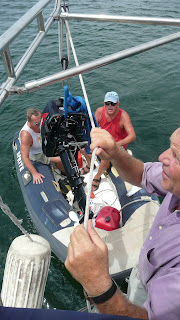 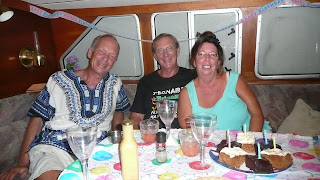 By Thursday morning the last of the trailing squalls had ceased and the sun peaked out a little through the general cloud cover. We hadn't been off the boat since Monday! I took the supermarket free shuttle to do some shopping in the morning and Scott took the public bus into town to look at outboard motors. We are finally replacing our on again off again old one. It's never been the same since it had a dunk in the ocean twice.
That night we celebrated Gloria's birthday with decorations and dinner on board "Scott Free". Years ago Francoise and Roger on "Starship Annie" did this for my 60th and it was fun to pass on this tradition (Gloria however is younger!).
Today, Friday the 17th, Scott bought the new Tohatsu 9.8 hp outboard. Brad took him over to pick it up and he and Dennis from "Jubilant" helped him hoist it onboard. Unfortunately the space on the dinghy transom is not big enough and Scott will have to reshape it to steer. We'll need a few days to test it out before heading for Bonaire.
Posted by Scott Garren and Heather Shay at 10:09 AM 0 comments 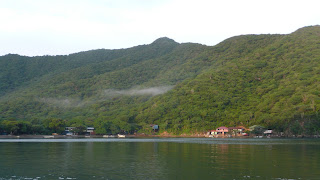 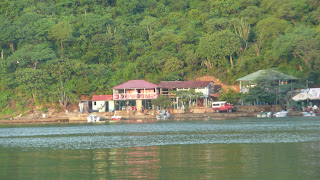 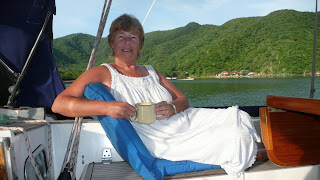 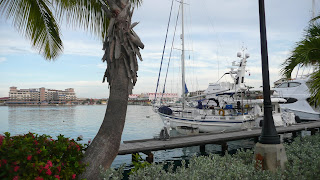 Our first day there however was spent on the internet and on Skype. We had decided not to continue on to Trinidad if we could change our plane tickets. These were frequent flier ones on American and Continental so this was a difficult process. It took a day but we managed. Unfortunately it meant I couldn't be home for Thanksgiving and my planned sister Paula's visit. This was very disappointing but frankly it was a huge relief not to be transiting the Venezuelan coast at this time. Security problems have been rampant. Just last week a French cruiser was killed there on his boat by robbers in front of his wife and 10 year old son. There have been many incidents within the last month. The Russian navy is off the coast till November in joint exercises with Venezuela. To top it off I've been suffering from bursitus and sitting for long periods of time has probably caused it to flare up again.
We emailed and then called all our family after we made the changes. Everyone has been understanding. Our next port of call is Curacao and we had a lovely day to motor sail the 50 miles over there.
Posted by Scott Garren and Heather Shay at 10:50 AM 0 comments