Posted by Scott Garren and Heather Shay at 10:02 AM 0 comments

Well, lots of news. On Wednesday March 11 we heard that Guatemala was restricting access into the country. And the situation throughout the world seemed to be escalating. Plus if the virus spread to Belize, they wouldn't be able to handle it. There are few and mostly basic medical services there. We thought hard and had a sleepless night over the options.
On Thursday, March 12, we checked the boat and ourselves out of Belize and motored all day down to an anchorage off of Livingston, Guatemala, where we enter the Rio Dulce. We were able to anchor just after sundown with several other boats (always a relief).  On Friday we crossed the bar and entered the country. We were extremely lucky because the twice a month high tides allowed us to cross the shallow bar without too much trouble. We still always have to hire a boat to pull us over on our side to get across, but it didn't take long.
We weren't allowed to leave Scott Free until the officials came out on their own boat (with masks and gloves) to check our papers, passports and take our temperatures. We were allowed in because we had only visited Belize after leaving Guatemala in January. (If Belize gets the virus, they'd shut down entry from there too). Guatemala closed their borders to Europeans last week and have added the ban to US and Canadian citizens at midnight on Monday, March 16.  So after one night anchored on the river at Cayo Quemado, we're back at our marina tied up and safe for now. The next question is when to fly home. Our son Joshua, a doctor,  thinks we're better off here. So we're staying put for now. On March 13 the first person to be diagnosed with Oovid 19 in Guatemala was an 85 year old Guatemalan citizen who had returned from a visit to Northern Italy. He later died.
Our friends Emerald Seas and Cordelia were out at South Water Cay, Belize expecting us to join them. We felt awful deserting them, but we have a deeper draft and more need of a high tide, so we felt we had to take off without them. Happily, they crossed the bar on Monday the 16th and will be with us here at Tortugal Marina in a few days. Yeh! Ten Year's After made it back on Saturday the 14th from Roatan and She Wolf and Capraia canceled their plans to go to Belize. So - lots of company here.
Update: Guatemala closed all their borders and the airport two days after Emerald Seas and Cordelia made it in. Many of our friends were stuck in Belize: Lapis, Firefly and My Jo left their boats at Roberts Grove in Placencia and flew home just before Belize closed it's airport.  Fandango, Chickcharne, My Island Queen, Canel, and Kookie Dance are still in Belize as of April 21. And Wahoo and Lianda are still trapped in Honduras.
Update Dec 2, 2020 - Everyone but Chickcharne, Lapis, My Jo, Firefly, and My Island Queen made it back to the Rio Dulce. Everyone but My Island Queen left their boats in Belize and flew home. My Island Queen never left the boat and continued cruising all year - they had a scary time avoiding the hurricane that hit Belize around Sapadilla Lagoon. Kathleen and Kevin flew back to Belize on 11/25 and are preparing My Jo and Sea Dragon to bring back to the river. Only Scott and Tamara are still at Tortugal, which has been flooded by the two hurricanes that devastated Guatemala this fall. Don and Rosie plan to fly to Belize in a few days but Woody & Judy think they'll leave Lapis in Belize and pay the temporary import duty.

Posted by Scott Garren and Heather Shay at 5:41 PM 0 comments

After our visit to Cahal Pech we walked down to the Iguana Sanctuary at the St. Ignacio Hotel. Iguana eggs and meat are highly prized here in Belize (and fairly easy to come by). This facility provides education to the Belize people and tourists re iguanas. They have numerous females and two lucky males (kept separate) that provide lots of baby iguanas to release into the wild safely. Our guide showed us around the facility and we got to get as close to the iguanas as we wished.
Next, we walked down to Ko-Ox Han Nah restaurant in "downtown" San Ignacio to meet Jim and Renate for lunch. They have meat raised on their own farm and all four of us opted for lamb - lamb liver for Scott and Renate and lamb burgers for Jim and me - all excellent.
The rest of the day we spent relaxing at our Maya Mountain Resort. Scott and I enjoyed the pool and we all enjoyed our dinner with new friends we met there who were celebrating a birthday.
The next morning we were off for our cave tubing adventure. Scott and I did this with Sean & Will last year and were able to find the facility without having to go through a secondary agency. Our guide was fun and there was more water than last year. The three-hour trip was over all too quickly! But it was time to eat again. We stopped at the same local place for lunch as last year and again, enjoyed it. Afterward, it was only a short half-hour to the Belize Zoo and then on to our rooms at the Tropical Education Center nearby. We stayed in the Pine Cabin with 5 rooms with private baths and a shared veranda - very comfortable. The rate of $100 US per couple per night included dinner and breakfast. We had booked in advance for the night tour at the Zoo and that rate was $100 US for 1 to 5 persons. After a typical Belizean dinner of stewed chicken, rice & beans and coleslaw, we were shuttled over to the Zoo and met our guide. We spent about 1 and 1/2 hours wandering around the Zoo at night meeting and feeding the nocturnal animals - which included all the 5 big wild cats here in Belize. They are jaguar, puma, ocelot, jaguarundi, and margay. The Belize Zoo only has rescue animals that are native to Belize. The zoo was founded in 1983 by Sharon Motola (we saw her several times during our stay). The excellent book "The Last Flight of the Scarlet Macaw, written by Bruce Barcott, documents her fight to save this beautiful bird's only habitat it Belize. Unfortunately, she lost and the Chalillo Dam was built.
Our last morning after a good breakfast we paid a daytime visit to the Zoo before driving back on the Hummingbird Highway to Dangriga. Every month if you are not a resident, you need to recheck with Customs, Immigration and the Port Captain and pay various fees to stay another 30 days. The maximum stay is 3 months. This was accomplished as well as various stops shopping for provisions and hardware, along with an excellent lunch at the beachfront Pelican Resort. We met the taxi driver who rented us the car and he drove us back to the Sanctuary Resort and our waiting boats. Great land trip!


Posted by Scott Garren and Heather Shay at 10:05 AM 0 comments

We've been plagued by a series of cold fronts coming down from the north. Every week so far we've had to duck into a safe anchorage while it passes through - either Placencia or Sapadilla Lagoon. As a particularly strong front was coming our way and lasting for several days, Jim & Renate on Emerald Seas and ourselves decided to take a 4 day land trip inland here in Belize and see some new sites. We left our boats in The Reserve Marina and headed off in our rental car. Our first stop was the Blue Hole National Park for a refreshing swim and hike. It's a lovely spot as you can see from the photos.
Next we headed for lunch in Belmopan. Scott and I love to pick a place after reading the reviews on TripAdvisor and we hit a winner this time. We weren't sure at first however as it was very hard to find - being down a pedestrian-only local street with very modest eateries. But the Everest Indian Restaurant was a terrific surprise. It's really not more than a shack but the food and service was unusual. Raj, the owner, convinced us to order "the full boat" and when the bill came to $35 US each we didn't complain (although that was a lot of money here in Belize for lunch at such a place). First, he painted our faces with colorful stripes, then we had an assortment of Appetizers followed by our choices of main dishes, which we could all share. Then a big plate of green leaves with a variety of spices like fennel seeds, coconut and honey were arranged (see the photo). Raj bundled each one up and fed us individually. It took a while to chew and swallow them - but it was fun and cleared the palate. Lastly, we had delicious cups of chai.


After our long lunch, we drove north to our hotel for the next two nights in St. Ignacio, near the border with Guatemala. The Maya Mountain Resort was set in a beautifully landscaped garden. Individual bungalows lined the paths and one larger house with 7 rooms. Renate & Jim got upgraded to a big bungalow as their original room was already occupied. We had one of the comfortable rooms in the larger building - all with private baths and airconditioning (if necessary). After drinks on our porch meeting fellow guests, we had dinner at the resort's restaurant.
The next morning we parted ways after breakfast. Jim and Renate took the car to see Xunantunich (which we visited last year with Sean & Will) and dropped us off "near" Cahal Pech. I say near because we couldn't find the entrance and the road was marginal - so we said we'd ask a fellow nearby so "go ahead". After several requests for directions, we finally found the big parking lot and visitor's center. Here's a case where Google Maps had an old location for the entrance on the other side of the property. Scott sent an email with photos to correct it. We were the only visitors that morning and it was rather magical to explore the grounds and ruins by ourselves. There is also a small but nice museum at the entrance with lots of history and information in English.
More info on our trip in my next post. 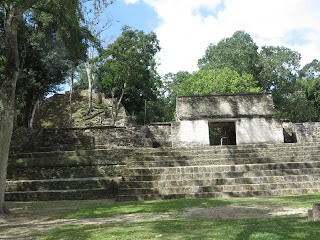 Posted by Scott Garren and Heather Shay at 1:57 PM 0 comments