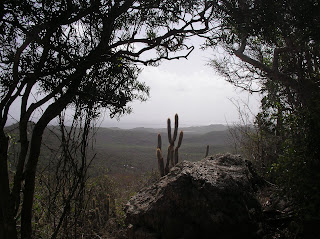 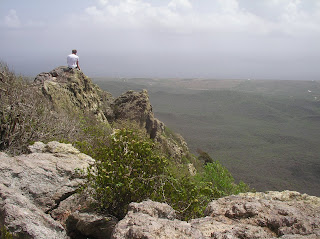 This park provides a protected environment for a large number of rare species like the white-tailed deer, cottontail rabbit, orchids and more. There are ruins of former plantations Savonet, Zevenbergen and Zorgvliet and an Indian site where Pre-Columbian drawings can be seen. The first of these was originally founded in the 1660s and rebuilt in 1806 after being burned down by John Murray, a pirate working for the British crown. Crops such as peanuts and sorghum were grown there but now it is all natural vegetation. We saw a number of interesting birds including the Crested Caracara (Warawara). Sean, Sarah, Scott and I got there as early in the morning as we could as we had a tough climb ahead, around 1000 feet up Saint Christoffel berg. Our rental car agreement stipulated that this park and the Beach parking lot at the Mambo restaurant were out of bounds for insurance coverage. We decided to take a chance with the park. The park ranger was surprised at this, informing us that they had good concrete roads installed, but we decided it was the car's low horsepower combined with the steep long ups and downs that caused the problems. At one point three of us had to walk quite a ways as the car couldn't make a hill.

The beginning of the trail was somewhat shaded and had lovely views (above left) but the top section was very steep and hot in the sun. The top was such a treat with 360 degree views and a stiff breeze. The hike took several hours and we all decided to take our lunch break in West Punt at the Playa Forti restaurant. Sean entertained us by jumping off the 40 foot cliff into the sea, several times. Caught here in mid space below right and in the water afterwards on the left. 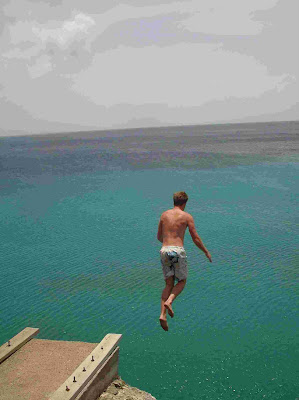 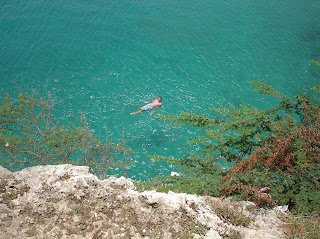 After lunch we went back into the park and drove around the north side by the plantation house, Boka grandi (a north coast bay and beach where swimming is dangerous), and the caves, home to nectar/fruit eating bats and some insect eating bats (up to 600 mosquitos an hour - YAH!). The red Indian drawings found here (and in Bonaire) are calculated to be between 500 and 2000 years old (picture below left). A distant view of our "mountain" is below right. 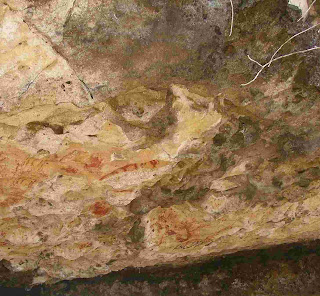 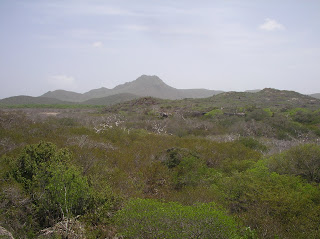 Posted by Scott Garren and Heather Shay at 2:18 PM 0 comments