We had a fairly easy trip out of the Rio Dulce. Hector took our halyard and tipped us over enough after we got stuck. It was only about 100 yards before we were free again. Then we all motored over to Tres Puntas for a quiet night anchored. Next day we were able to sail part of the way up to New Haven (the rest had to be motored). A "Norther" was coming in on Sunday so this was a good protected spot to weather it out. One night everyone came over for Mexican Train Dominos and drinks.
Then on Monday we sailed up to Placencia and checked into Belize the next morning. The next few days we were plagued by winds from the south during the day that sent rollers into our harbor and had all the boats rocking and rolling. We were glad to head north up to Sapadillo Lagoon for a few days with the four boats already mentioned, Indian Summer and Cordelia. This is a very protected anchorage with a beautiful Marina and Beach Bar. The development here, called Sanctuary, has been through some tough times and there are only about 35 houses built (there are 700 owners suing the developer, who is under investigation from the FTC at present). They love the cruisers that bring some life (and money) into the place. There is a great laundromat, convenience store and fuel dock.
Fourteen boats spent a few days with us anchored outside the Marina and we enjoyed the Beach Bar and facilities.
After last night's Norther went through, we're off towards the reef for some snorkeling and swimming. Now anchored in Blue Ground Range. 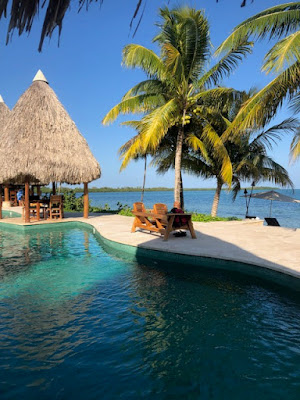 Back on the Rio

We had quite a scare on Tuesday Jan. 15. Our dinghy was out of commission getting a leak fixed and Jim from Emerald Seas volunteered to take the two of us into town. He has quite a powerful motor on his inflatable and had just come up to speed a ways off the Marina when my cloth shopping bag started to fly off. He lunged to grab it and accidentally threw the tiller/throttle over hard. The dinghy took a very sharp fast turn and threw Scott and I overboard. It almost took Jim as well but he managed to hang on and put the outboard in neutral. I was thrown upside down hard and was disoriented. But both Scott and I could hear the engine and feared being cut up by the propeller. Both of us stayed underwater worried about it. But I had inhaled and swallowed some water and finally had to come up. I was in pretty bad shape, coughing and having a hard time breathing. Luckily a nearby launcha was there very quickly and reached down to hold me up. Meanwhile Scott came up under the dinghy and Jim managed to haul him out from underneath.
It all happened so fast! We were very lucky it wasn't much worse. Everyone helped haul Scott and I up into Jim's dinghy and we returned to Tortugal. Some of the staff there had seen the accident and they were waiting with towels and welcome hugs. Jim was very shaken too. All of us were soaked. Scott lost one of his hearing aids and Jim his prescription glasses. Luckily my pocketbook which was around my shoulder, stayed on through everything (and neither of us had brought our cell phones!). A very hot shower helped us calm down and warm up. This morning a stiff neck from the whip lash and some nightmares last night are all that's left.
We've been back on the Rio since Jan. 3 and after a week getting Scott Free's bottom and boot stripe redone on the hard at Ram Marine, we were back at Tortugal. Alternator problems from last year are still with us and hopefully will be finally fixed tomorrow the 17th. New canvas, dodger, bimini and transition unit will be finished then as well. With any luck the bow thruster problems will at least be diagnosed too. We hope to check out of Guatemala and exit the "dreaded" mouth of the Rio on Friday the 18th. The high tide is early evening so it will be a dark crossing over to Tres Puntas anchorage for that night and then the next morning we will sail north for a safe anchorage either at New Haven or up to Placencia. A big norther is coming in Sunday morning so we need to be somewhere with good protection.
It's been lots of fun socializing here as many of our good friends are here. There is one group every morning enjoying the free coffee and another even bigger one at cocktail time. Good conversation and lots of support with repair issues. We'll be leaving the river with several boats - always a huge relief. More news when we get to Belize.
Quick note - we're at the mouth of the river waiting for the tide - in one hour. We've arranged for a boat to stand by and take our halyard to tip us over so we can make it out. Wish us luck!
Posted by Heather at 5:14 PM 0 comments