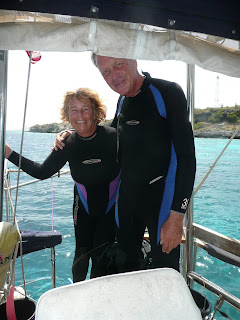 We've had a great time diving this spring in Bonaire. In the past we generally went out in Carib Inn's boat to dive with a dive master. As new divers this was reassuring. In addition our dinghy had difficulty handling the extra weight of the dive equipment. Scott reinforced the sides to keep it from buckling and it's made a big difference. So now we load up and head out alone to explore. 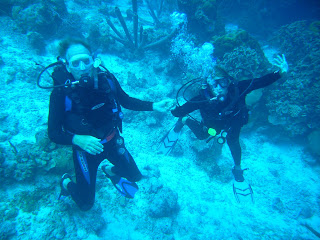 We got a little bit blase and had a rude wakening the other day - YOU ARE UNDERWATER and it can be dangerous! We were following a line leading to a wreck when I noticed some difficulty with my regulator. It was letting in some sea water with my air. I thought well, I'll just switch to my secondary system. Without really thinking carefully about the procedure, I did it. No air came through! I started to panic. 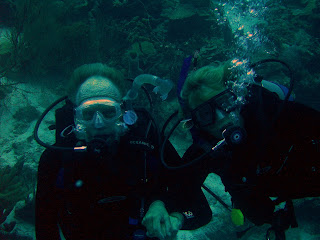 Your first impulse is to take out the regulator and breathe - crazy huh? I managed to get the primary regulator back in my mouth and get it going. Scott was next to me greatly concerned. Now when you're below 40 feet you aren't supposed to go directly to the surface so he was prepared to offer me his secondary regulator if I couldn't use mine. Really the important thing is not to panic. Happily I didn't, although I admit I came close. 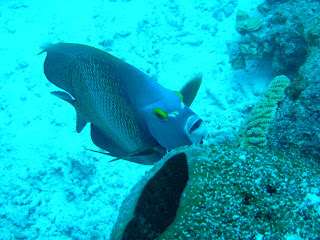 By keeping my head more vertical I eliminated the salt water incursion and was able to complete the dive. It turned out the regulator needed tightening. The secondary system worked fine; it just needed to be purged.
Scott and I scheduled a practice session the next day and spent some time going over safety procedures! 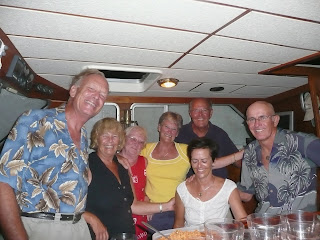 The diving has been amazing. We've seen a lot of turtles and a week ago one joined us for several minutes, swimming right beside us. We often have individual fish spend time with us, usually porcupine fish or parrot fish. A huge midnight blue parrot fish follows all the scuba divers near Small Wall, 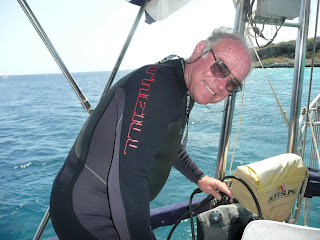 one of the many dive sites on Bonaire. A reddish orange seahorse, about 5 inches long, hung out around our boat for several days. He attached himself to a piece of coral and didn't seem too concerned with the crazy humans watching him.
Another day a line of squid performed a mini Rockette number - actually I thought of those old Esther Williams movies! We often see moray eels of several kinds and an occasional octopus (they change colors dramatically!). The water is very clear here and the fish, vegetation and coral in all colors - not at all like these photos! 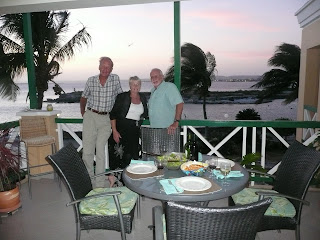 We also dove with friends a lot. On two occasions we took Scott Free down the coast or over to Klein Bonaire for a day diving with a group, followed by a meal. Here is Honoree & Walt from "Will O' the Wisp" and Lynn & Paul(shown in his dive gear as he took the group shot) and Ron & Pat from "Kiyana" at a Mexican pot luck following our dive at Thousand Steps. Our last weekend before leaving for Curacao was the Heinekin Jazz Festival. 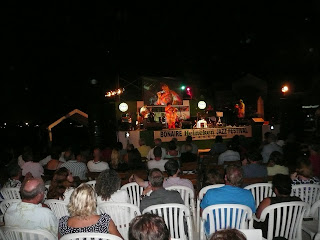 There were groups from Holland, Jamaica and the Netherlands Antilles. Bob and Barbara hosted us for dinner the first evening before the concert at their beautiful condo nearby. The second night, our last in Bonaire, we had ribs at Bobbe Jan's with Walt and Honoree and then walked down the waterfront to the venue. It was a full moon and the stage was set up almost on the beach.
The next morning we hoisted sail at 7 AM and didn't turn the engine back on until the entrance to Willemstad in Curacao - a lovely final day at sea until next fall. We're hauling the boat at Curacao Marine for the summer, returning September 29.
Posted by Scott Garren and Heather Shay at 6:39 AM 1 comments