A visit to Colca Canyon 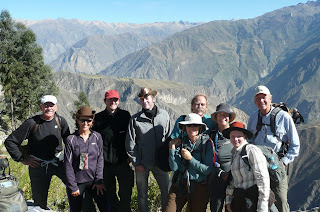 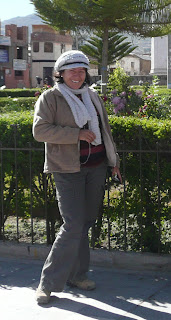 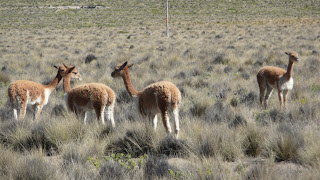 In Arequipa we checked out several tour agency trips to the Colca Canyon and all voted unanimously for the three day trip that includes hiking down to the bottom of the Canyon and camping there for a night. A small bus picked us up at our hotel at 7:30AM and we met the three additions to our group; 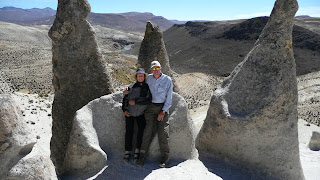 Martin, an architect from Germany; Philip, an engineer from Austria; and Inkein, a drug counselor from Holland; They´re all about 30 and turn out to be lots of fun. Our guide Olivia is wonderful (that's her above right) as was our bus driver Pablo. (That's left to right in the group 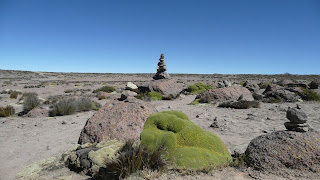 shot: Walt, Honoree, Philip, Martin, John & Brenda, myself, Inkein and Scott)
The first two hours are getting out of the city and into the barren lunar landscape of the Reserve Nacional Salinas y Aguadad Blanca - a reserve for vicuna (the first picture above), alpacas, llamas, 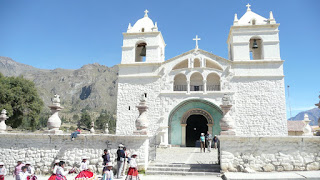 and vizcachas (rabbit like rodents with long tails), along with some very unusual plants called yareta (above left). These live for centuries but only grow to about one meter high and only centimeters a year. They look like moss covered boulders and are just as hard! They can withstand temperatures down to -50 degrees. 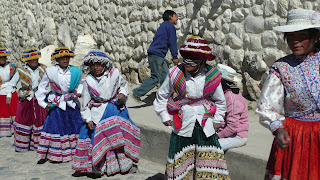 We took a hike through some unusual rock formations that reminded Scott and I of Bryce Canyon and oohed and aahed over the adorable vicunas, many with babies. Our road reaches a height of 4800 meters (about 15,800 feet) before descending 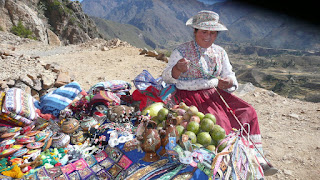 to Chivay, the gateway city to the Colca Canyon. There we had an enormous buffet lunch of local dishes. The food here in Peru is wonderful. We haven´t had a bad meal! We ate alpaca, ostrich and cuyo (guinea pig) and a huge variety of vegetables and new grains. The soups are particularily fabulous and are usually part of every lunch and dinner. 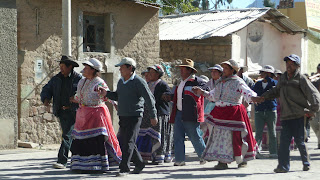 A series of charming small villages line the valley and then the canyon itself. Each has a small Colonial church 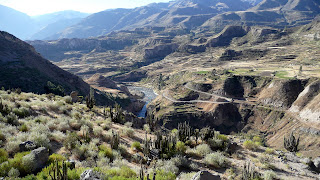 and traditionally dressed locals. There is a festival every day somewhere it seems. We witnessed lots of dancers and bands parading around town; adults and children. Along the canyon edge at each of the view points, women sell their crafts and sometimes fruits and vegetables. 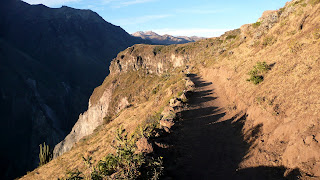 Their densely embroidered dresses and hats are beautiful. At first terraces climbed the gradual walls of the valley but soon the walls became almost vertical and the river farther away. The road wound along the edge of the canyon with occasional viewing spots. 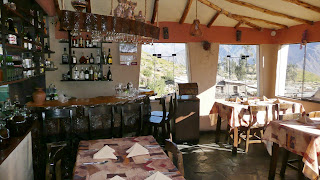 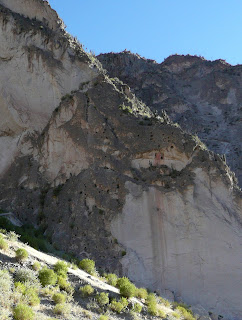 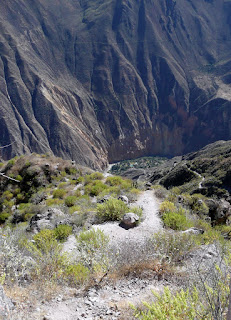 Up above us were more cliffs, some with hundreds of buriel caves - clearly visable now, long ransacked (above right).
We enjoyed an hour long hike along the canyon edge ending in a sunset at highest viewpoint. This canyon is twice as deep as the Grand Canyon! And the next morning we´re climbing down to the bottom, almost 4,000 feet (we´re not starting from the top). 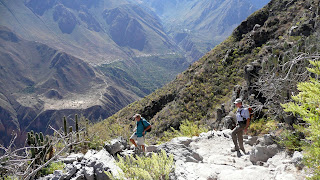 That first night we slept at the Kuntar Wassi Hotel in Cabanaconde. It´s a lovely place of stone and local materials and very artistic. We enjoyed a drink sitting around an open fire and then a delicious meal; a soup of tomatoes, onions and a local cheese followed by roasted alpaca or grilled trout with an orange cake for desert. That's the restaurant above left. 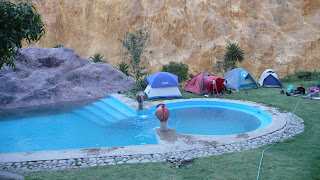 The next morning we hiked 3 and a half hours down to the campground at the bottom. There´s several swimming pools there built around the natural rocks and basic huts to rent but we slept in tents around the pool. It´s hot at the bottom and we were in 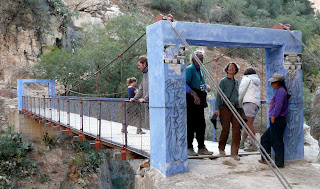 the water in record time. Olivia cooked a wonderful lunch. Later we hiked down to the river and along it to a pedestrian suspended bridge where once an Inca fiber bridge stood (think Indiana Jones´s second movie). It got dark as we returned to candlelit tables, red wine and another great meal. We are so incredibly lucky to be able to experience this. 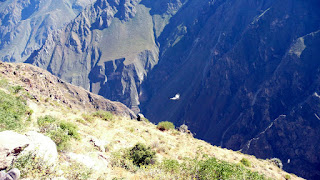 When the sun went down it was really cold. So soon after dinner we retired to bed. Olivia woke us up at 4:00AM for the hike to the top. Yes, that´s right! After a brief breakfast we began the hike 4,000 feet up at 4:30AM in the dark. It was eerie walking with our headlight torches in a line up the steep path. Here in Peru they don´t have lawyers and 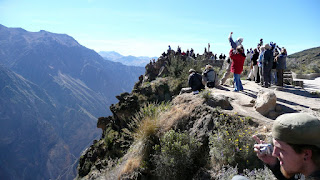 liability problems like we do. The paths are narrow and there is nothing to stop you falling off the edge if you stumble. We all clung to the canyon wall as we walked until finally light began to illuminate our path and we could turn off our torches.
Time was of the essence here. We wanted to be at the Cruz del Condor by 9 AM at the latest to see the condors rising up from the Canyon.
I managed to hike straight uphill those 4,000 feet in just over 3 hours - definitely a record for me. The two young men did it in 2 and a half hours. The rest were 20 minutes ahead of me. We had a brief second breakfast in town and then raced down to the viewpoint. 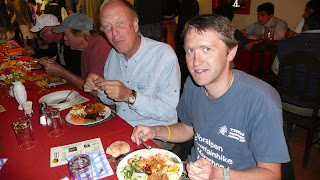 .
Five minutes after we arrived an enormous condor rose up and spent the minutes buzzing us. We talked to other tourists who had been there for hours and this was the first one they´d seen! Our luck had held
It was a long drive back to Arequipa punctuated with stops at viewpoints and another great buffet lunch. After a few more days there we would be off to Puno and Lake Titicaca!
Posted by Scott Garren and Heather Shay at 10:39 AM