Trekking around the Alpamayo - Part I 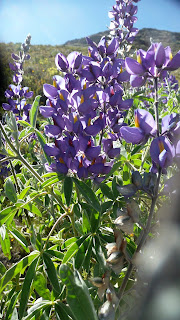 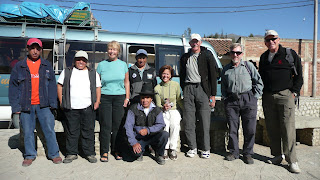 After three days of day hiking we really enjoyed our first day of the trek - driving down the valley and up a long narrow dirt road to our first campsite - no hiking! That's Esau Morales with his dog saying goodbye to us. That's Marcello our assistant cook behind him and Roger, our "sweep" on the right. 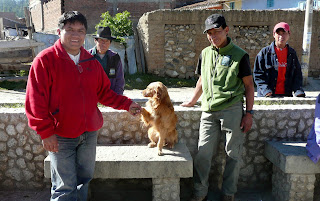 In the group picture from left to right that's Roger, Myoume, me, Ali, Honoree, Walt, Geoff and Scott with Marcello kneeling in front. We made several stops on the way. Our first was the memorial park for the town of Yungay where in May, 1970 14,000 people were buried by a landslide set off by an earthquake. A group of children and their teacher were visiting a mausoleum built on 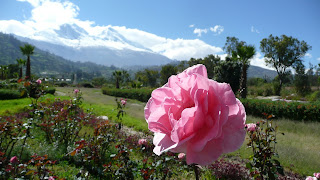 artificial hill near the town when it happened. They watched while their homes and families were inundated. Now a beautiful park lovingly tended with thousands of flowers covers the remains. The facade of a church was erected with views of the mountains at the end. 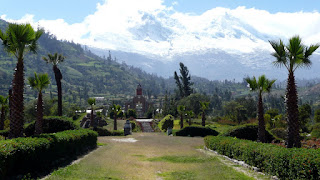 Nearby we stopped by the side of the road for lunch. Myoume is a talented chef that can prepare terrific meals anywhere. Despite the continuous nausea I'd been experiencing for days, her lunch tempted me. Fresh trout with carrots, onions and herbs, and brocolli. 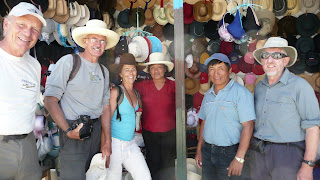 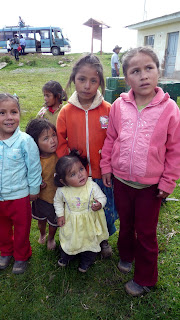 Next was a stop at the local market in Sucre where we found some local tapestry to put away for Honoree and Walt's wedding anniversery later in the trip and Honoree found a terrific hat which she wore for the rest of the trek (on her head in the picture, third from left).
Our first campsite was at the end of a very long dirt road and the site of a small village. Every child in the vicinity hung around us until dark. Honoree was the ringleader. She had us and the kids singing songs - no mean achievement! 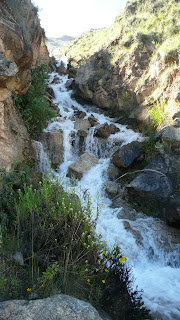 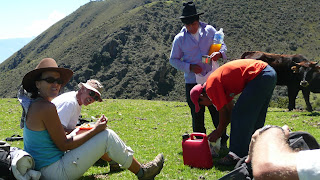 The next morning we started out early - six hours up an endless series of switchbacks. For the first four hours it was discouraging as we could see our campsite below for what seemed like forever. Up above we saw the waterfall we would cross and then the distant pasture with trees where we would have lunch. Today we had chicken vegetable pasta salad - delicious and healthy. Hot tea is served with every meal, even on the trail. 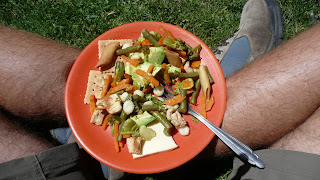 With two more hours of hiking ahead I settled into plodding along, head down. Joyfully we reached our campsite earlier than expected and the gaily colored tents are a wonderful sight. It was a beautiful spot with endless views of the mountains and it was a lovely sunny day. It was the first and last time we were able to sit outside and read before dinner. 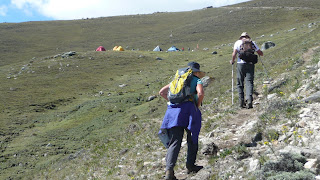 It was always too cold or too late from then on. Dinner was terrific but I was still having problems eating. Eli didn't feel it was altitude sickness so Scott diagnosed side effects from the altitude medecine and my blood pressure pills. So I stopped taking both for 24 hours and I felt much better. Then I resumed my normal blood pressure prescriptions and all was well.
Posted by Scott Garren and Heather Shay at 8:48 AM