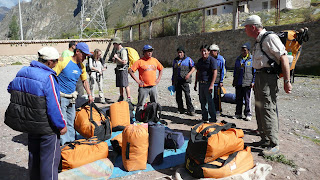 We had booked the Inca Trail last fall as only 200 tourists (and 300 support staff) are allowed to start the trail each day. It takes four days and ends at Machu Picchu. We went with SAS tours and had two excellent guides, Jose and Rodney. Both spoke English very well and were knowledgeable about Peruvian history, culture, birds and flowers. 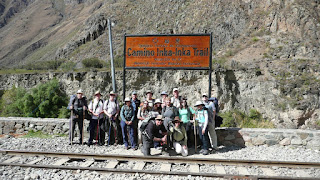 We also had 21 porters carrying both our belongings and all the camping gear. We had light day packs with water, extra clothing, suntan lotion, and a few snacks. There were 16 tourist in our group, the maximum per group. Three single men, pharmacists from Washington State, a mother 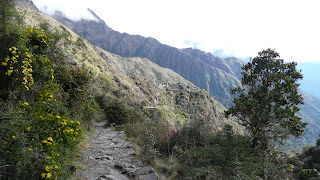 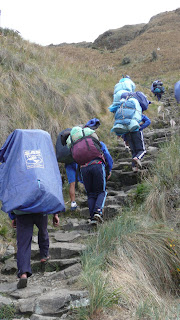 and daughter (15) from California, a former PCV from India (1965-67), a young couple from Wales, and another young American couple from Atlanta. That´s our group at the start of the hike above right. Even though there were a lot of people on the trail, we saw very few during the hike. 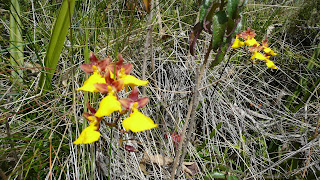 We did see more porters of course as they passed us each day (that´s a few of them with the big blue packs above). You´d hear the call from behind ¨porters!¨ and move over to the side of the trail. Each group is assigned camp sites in advance and that determines the amount of hiking you do each day. There were good and bad elements to our assignment. 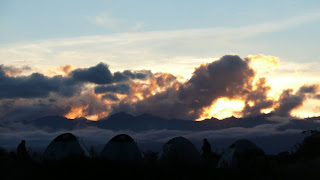 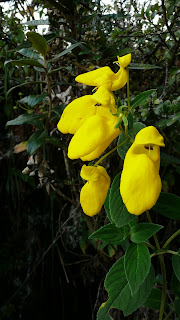 The bad was a VERY long second day and the good was an easy last two days.
We were picked up at our hotel at 5:30AM that first morning and met our group on the bus. It was too early for breakfast at our hotel so we were half asleep, without coffee, until an hour and a half 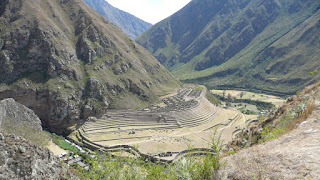 later when we stopped for breakfast. Only forty minutes later we were on the road again, this time heading down a narrow dirt road along the railway and river to our embarkation point at kilometer 82. There´s only room for one vehicle at a time on the road, so when we meet another one, someone has to back up to a wider
spot, sometimes a long way! 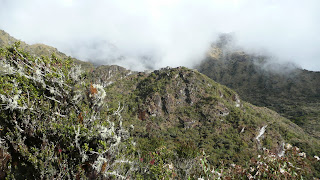 At the end we saw a chaotic scene with all of the tour groups organizing their clients and luggage. The big concern was the weight of our bags for the porters. We paid for a certain amount of kilograms and Scott and I had 27 allowable. Everyone else´s were being weighed and some were overweight. I asked our guide why 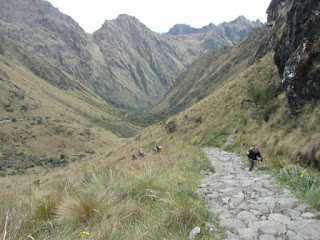 he hadn´t done ours. He picked up our two bags and said, ¨We don´t need to weigh these - no problem.¨ So we only had to put on our back packs and head down to the bridge across the river. There was our first check point. Our passports and tickets were all inspected and stamped; our names checked against the daily roster. Rodney snapped our group photo with 8 or more cameras and we were off! 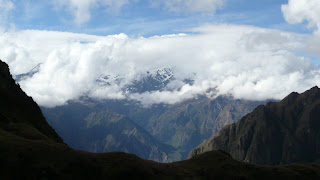 The trail at first followed the river and was wide and rolling - time to get our pace going. Then it turned away and up. This long first uphill separated out the fit and acclimated and the others that panted on the side of the trail. After 6 weeks in the country and lots of trekking behind us, we 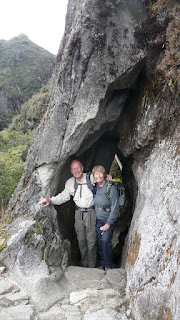 waved good bye to many groups. Happily ours were all in pretty good shape. Leonard (far left in the group picture at the top), the ex-PCV, had hurt his foot so he had a harder time of it but still wasn´t far behind the leaders. They were Scott and the 15 year old (who didn´t wear a pack). I came in near the middle of the group - for once, not the end! Not far from the top was a beautiful ruin, Llactapata (town on a hillside). After visiting that (Jose gave a talk at almost every ruin), we went steeply downhill to our lunch spot. Our lunches were in the dining tent, sitting on chairs, and included soup and a extensive buffet. The food was excellent and plentiful.
The trail itself was half dirt and half stone. About a tenth was steps, either up or down and occasionally, through tunnels cut out of the stone (they had no metal tools!). After lunch we went generally uphill for a about 3 hours and then, after a brief tea and cookies, collapsed in our tents for a rest before dinner. This was another good meal of soup and a large assortment of meat and veggies and salad. 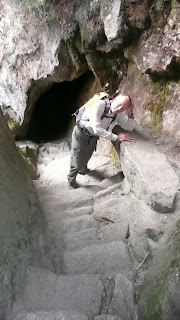 The next morning we were up at 5 and on the trail at 6:30. We were on the trail almost 11 hours but the good news was we could stop and rest when we needed to. In fact the day was easier than we had feared. For one thing it was so beautiful and again, we didn´t have to rush. We did cross two passes, the first, Dead Woman´s Pass, is infamous. It´s supposed to be a steep three hour walk up and another down. But I even did it in much less time! Then lunch followed by an other steep one and a half hours up and down. 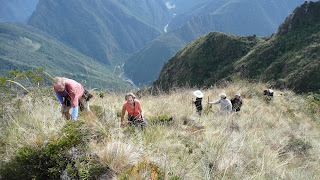 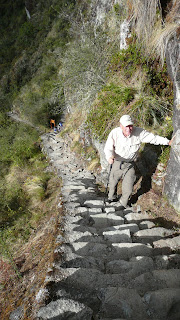 On this section we had two lovely ruins to explore. Both Jose and Rodney gave talks on Inca history and customs to us at various times. The weather was very cooperative. During our first long uphill it was somewhat overcast and cool and then just after the blustery cold top, the sun came out and it was lovely. We wore every layer of clothing or sometimes just one.
The third day we only had four hours of hiking but still were on the trail at 7:30 as Jose wanted us to be at our next campsite for lunch. That morning had a break at a campsite and ruin mid way. There we climbed a very steep ridge for a view of Wauylu Picchu in one direction and the ruins of Phuyupatamona, in the other. This was used as a signaling post during the Inca empire. After lunch we had the afternoon off to explore the beautiful nearby ruins of Huinay Huayna or ¨Forever Young¨ in English. 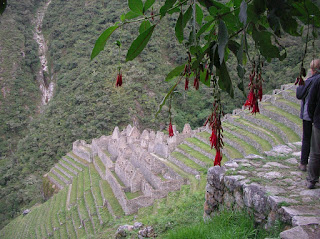 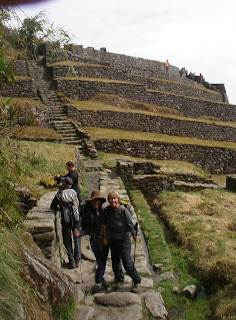 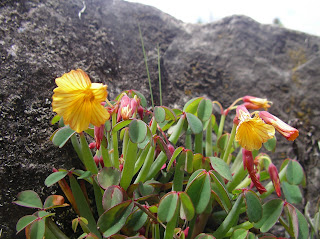 At our last campsite was a hostal for hikers doing a one night trip to Macchu Picchu (we were still in our tents) so it had hot showers and a small restaurant with - cold beer! This combination was heaven sent to all of us.
After another wonderful dinner we had a farewell ceremony with our staff. Eliot, one of the pharmatists 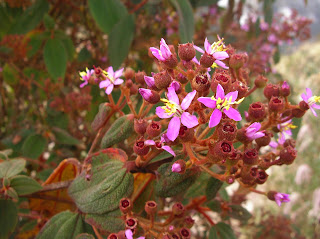 and Honoree had worked out our tips for the porters, cooks and guides. Eliot gave a little speech and then many people stepped in for a few words of thanks. Most amusing for us all was the special tip and thanks from Honoree to the porter who rescued her flashlight from the outhouse hole (with a plastic bag over his arm). Talk about above and beyond the call of duty!
The next morning we were getting an early start for the last push to Macchu Picchu - my next entry.
Posted by Scott Garren and Heather Shay at 9:09 AM