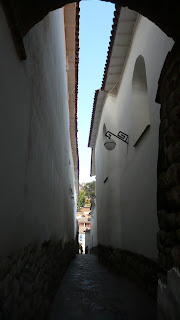 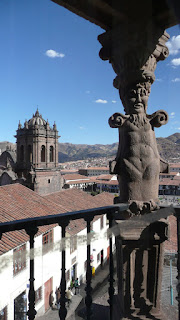 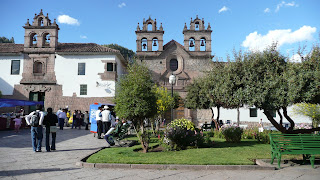 Cusco is a vibrant pulsating city, especially in June. This is the time of the Winter Solstice celebration and their are parades and competitions every day in the city. At night groups of men, women and children are practicing their numbers everywhere. In fact, everywhere we went in Peru there was a fiesta or celebration most nights. We spent three nights before heading out on the Inca Trail there and then three nights after returning. We would have loved to have stayed longer. Walking around either by day or night is such fun and feels very safe. There is so much going on! 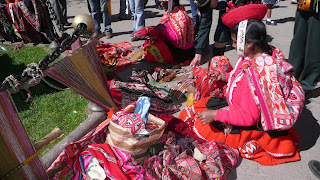 The vendors are both a plus and an annoyance. Their wares and tradional clothing are all colorful and fascinating - and make for great photos, but their persistence can be very annoying. No Gracias! is a constant refrain! Children are often used to tug at your heartstrings and that works all too often. 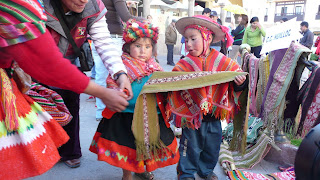 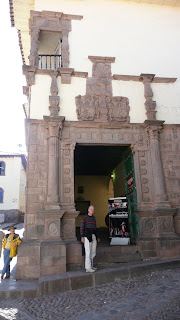 We stayed in three different hostals there. We arrived without a reservation and were unable to get into "". So we spent one night at the Amaru Hostal and the next two at the San Blas Hostal where the others were staying. The last three nights we had reservations made weeks earlier at the Monte Horeb Hostal. I´ll have a seperate blog entry on hostal reviews later. 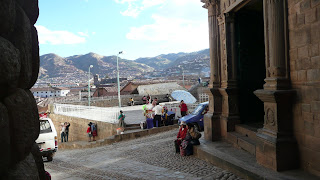 Three are thousands of restaurants everywhere and we did have some good meals. Some of the best deals were away from the tourist areas and in local places. A "menu del dia" at one of these costs around $2.50 and includes soup or salad, a main dish and a drink or dessert. 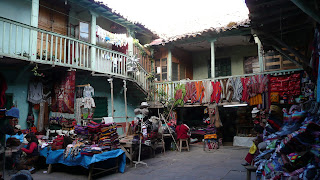 Shopping occupied us all. We bought gifts for all our families and sometimes ourselves. There is a huge variety everywhere, although tremendous duplication for sure. Woven fabrics were one of my favorites and we bought several, one a wedding present for our good friends Ted and Karen Martin´s daughter Mandy, who is getting married in July. 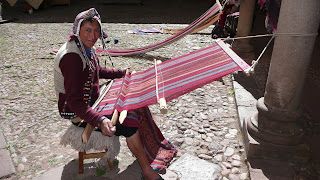 We saw many weavers at their looms throughout Peru but really fell in love with the Artisan´s Cooperative in Cusco where they used all natural dyes in their alpaca and wool yarns. The runners, squares and blankets were works of art. They were giving demonstations in the Inca Museum´s courtyard, shown here. 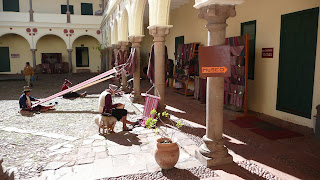 Just one of these pieces takes months of hard work. Happily here they get a fair share of the profits for a change.
Posted by Scott Garren and Heather Shay at 2:32 PM