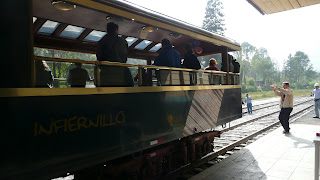 The bus trip from Huaraz to Lima was 8 hours. We were meeting two new friends there who would be joining us for the rest of our trip. Brenda and John are cruiser friends on ¨Willow¨, now in Puerto La Cruz, Venezuela. It was a great reunion at our pretty Posada del Parque in Lima. More on our stay in Lima later. 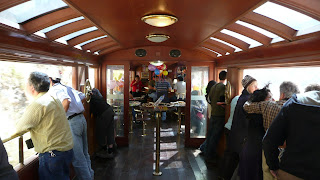 Two days after their arrival we took the train to Huancayo - until 2005 the highest train in the world (now surpassed by the Chinese train to Tibet). Twelve hours crossing a pass of 15,500 ft on a train and track finished in 1906. The Huancayo area contains some interesting pre Inca Wari ruins, artisan villages specializing in 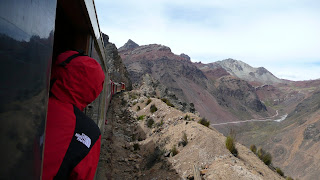 weaving, carving gourds, and jewelry, and beautiful little villages with early Colonial churches. This is a rich agriculural area growing a huge variety of crops. We spent three days touring this beautiful area with Lucho Hurtado. He is the owner of Incas del Peru and ¨The Cabana¨, a charming restaurant where we have a fun dinner with entertainment one night. We really lucked out again having such a knowledgable and fascinating guide. 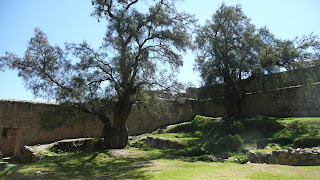 One of the largest pre Inca civilizations was the Wari. We visited Wari Wilca, a sacred place of the Wari in Huari behind a Colonial Church (they tried to bury the temple). The courtyard still remains with two lovely huge very old molle trees next to the holy spring. The local people still leave offerings here and in the church. Most practice both the old religion and the (comparatively) new. 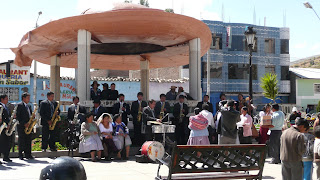 Our next stop was unexpected. We came upon a christening party in a small village square and were invited to join them. We all had badges with the picture of the young celebrant pinned on and ate soda and cookies. A band played and it was joyous occasion.
Food in Peru is great. We have had some meals in restaurants worthy 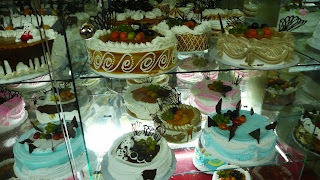 of rave reviews in NYC! Of course we have also eaten on the trail and in very rustic
environments, but still the food has been excellent. Two different ends of the food scale are shown here: a pastry shop and a cuyo (guinea pig) ready for the grill. We stopped for lunch at an outdoor BBQ place near a lake. . 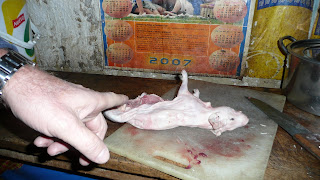 Scott and Walt had the cuyo and the rest of us trout. We sat outside at picnic tables under a thatched roof. That is Lucho here helping to distribute our meals.
We visited a number of artisans in their homes. Our first was our favorite. Two women specialized in woven belt, worn by both men 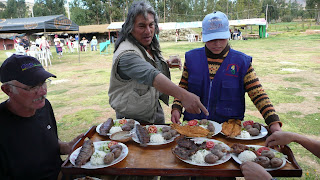 and women both working in the fields as support for their backs and in their everyday dress. Scott, Honoree and Brenda all bought one. This picture shows Lucho and both weavers along with Scott wearing his belt far right. Another interesting stop was blanket and tapestry weavers. Here we saw men 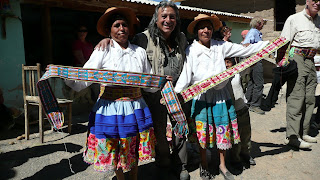 doing the work and boys learning the trade. I would have loved to bring back one of these beautiful wool and/or alpaca blankets but they were too heavy to carry with us. The colors were really beautiful and were from natural dyes. Another stop was a village of silver smiths. They specialize in filigree work and it is very lovely for sure. 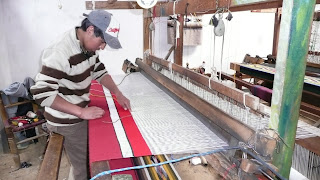 Scott and I stayed an extra night and took the bus back the next morning to Lima. The others took the overnight train back and regreted it. It was really hard to sleep and it arrived at 5AM in Lima - not much to do at that time of the morning.
Posted by Scott Garren and Heather Shay at 4:41 PM