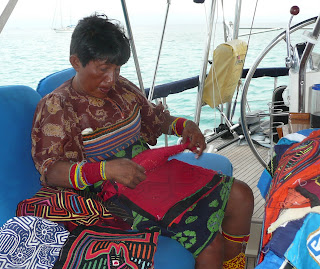 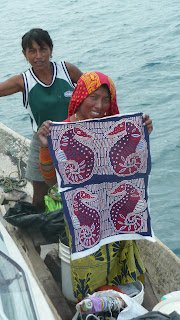 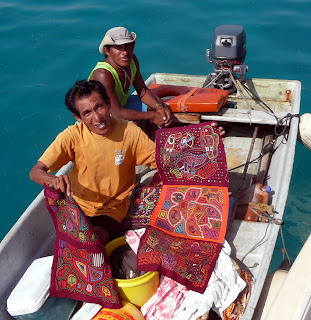 The Kuna Indians call themselves the Tule. They inhabit around 40 islands in the San Blas island archipeligo of 400 islands and a large strip of land on the mainland. There are also Kuna further inland in the Darien but 40,000 of the estimated 62,000 live on the islands. They are small and crowded! See my next blog entry on a visit to one of them. Originally they painted geometric designs on their bodies but now these designs are sewn from several layers of bright cloth, called molas. 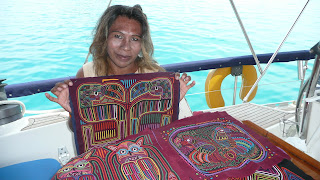 They cut sections from the cloth to reveal the layers below and then sew the edges almost invisably. This is sometimes known as reverse applique. The whole piece is covered in designs revealing different layers of cloth - either geometric or representational. 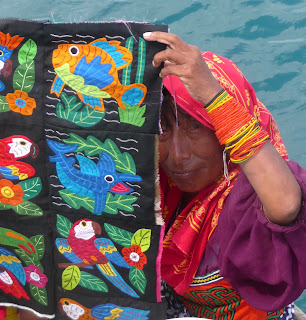 Almost all the women sew molas. They wear a pair of them on the front and back of their blouses and sell them whenever possible. Every day, at least once a day, one or more women will come in their dugout to sell you some molas. Some of the master mola makers are men. We bought a number of molas from two, Venancio Restrepo (above left in his boat) from Isla Maquina and Lisa Harris (above right)from Rio Sidra. Lisa is a transvestite. Homosexuality is very accepted by the Kuna and as property passes down in the female line (women propose marriage and a man moves to his wife's family's home), it is not unusual for a man to decide to become a woman. 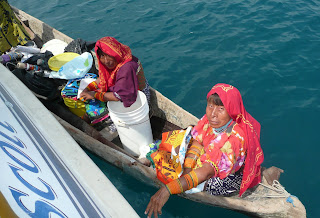 Cruise ships have recently started to stop here in the San Blas and some women have started to make "tourist molas" - two examples of these are in the top right picture and the one just above right. They are done with regular applique and embroidery rather than the traditional reverse applique. They use simpler color combinations that they've learned will sell well. 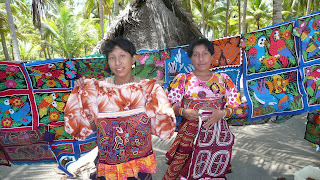 Of course they are still lovely. Traditional colors are maroon, orange, black and blue. Examples of these are held by Lisa and Venancio. They are very bright and to most cruisers, irresistable! One commen topic is "How many have you bought? And from whom?" 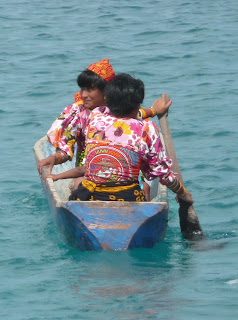 We're up to 16 on this trip. We also purchased a number of them in Cartagena and had them made into bags, aprons and pot holders for gifts. A few of our new ones are really works of art. All of them are beautifully crafted and charming - and a lot of work!
Posted by Scott Garren and Heather Shay at 11:33 AM