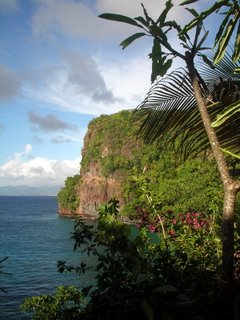 From Union we went directly to Bequia. There were a lot of islands in between, the wind was up and it was a lovely sail. We had originally planned to spend time in the Tobago Cays - a group of small deserted islands protected by Horseshoe Reef. But the constant strong sun had taken its' toll on James. As a red head and very fair he's always had a problem but living on the boat made it more difficult: he had a bad case of sun poisoning. So we decided to head to a larger island and do more sightseeing. Bequia like many of these islands has a seafaring, fishing and boat building population but one thing is unique. The island has an active whaling station and by IWC agreement, local whalers can take four whales a year, although in some years they don't get any. Few people are left with the skills necessary to hunt them - a daring feat in an open sailing boat, using hand thrown harpoons. The Japanese have been active in all the Carribean islands building parks, schools etc. looking for support for their whaling interests.
We anchored in Admiralty Bay off Princess Margaret Beach (a famous visitor). On the way there we passed the homes at Moonhole and were very curious. Luckily friends had arranged a tour and we were able to join them. We traveled in two jeepneys, first on paved roads and then on a barely passable dirt path.
When the late American architect Tom Johnson built the first home here in 1963 under the Moonhole arch, there was no road and or good anchorage. His home grows out of the rocks without straight lines or right angles. All the homes have huge arches, fantastic views, lovely patios, and most windows are open to the elements. They are not connected to the electric lines but some homes have solar panels or wind generators.
Tom's son and his wife, Jim and Sheena Johnson, live there today and showed us around their home and the original house, now abandoned. A huge boulder fell from the arch and landed in one of the beds. Fortunately no one was there at the time. The home reminded us of the Ancient Pueblo Indian dwellings we saw at Mesa Verde, especially from the sea. Built in a series of levels with single rooms and terraces, their favorite spot was a pyramid roof under which still sits their deck chairs facing the sea.
We finished the tour at the Johnson's bar with some of her famous rum punches. They have three pet turtles that roam around. They love to scratch their backs on whomever sits in the hammock. Many of us gave it a try. We wished we had a chance to see some of the other homes, but most were rented or their owners were in residence. Their are 18 in all and have the whole peninsula to themselves.

Posted by Scott Garren and Heather Shay at 2:59 PM