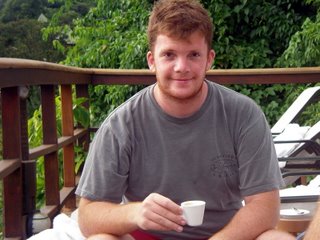 Our son James flew into Grenada on November 13 from New York City. He lives in Brooklyn and is working at the River Cafe while he studies for the LSATs and applies to Law School. Luckily he was able to take two weeks off and sail with us north through the Grenadines. We only had full day in Grenada so we toured St. George's, had lunch at "The Nutmeg" and then swam and snorkeled off the boat in Prickely Bay. The next day we sailed up to Tyrell Bay in Carriacou. Carriacou is a Carib word meaning "island surrounded by reefs" and the following morning James, Heather and Scott had a chance to see them up close and personal. Scott did his PADI certification course here with Georg and Connie at Arawak Divers. James and I took their introductory course and did a shallow dive in the morning and then a deep dive that afternoon. We went down to 41 feet and stayed down over 40 minutes: pretty good for a first try. We both had some problems with equalizing our ear pressure but resolved it (although it was several days before Heather's ears completely cleared). The variety of fish and coral was wonderful and the time went by so quickly. 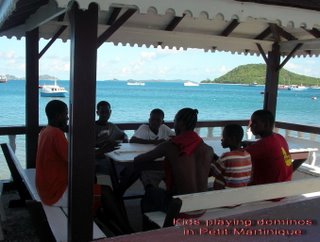 Scott joined us for the dive and we all celebrated that night with our friends from "Nereia" and "Seacycle". Jaime and Dan had their boat hauled out there and rented a great cottage nearby. They invited us over for drinks and appetizers - really dinner, there was so much. The next morning we were off again, this time to Petit St. Vincent and Petite Martinique. A squall came in half way and blocked all visability for awhile but it cleared off and the sun came out as we anchored off the PSV resort in crystal clear water. This beautiful elegant hotel has cottages scattered along the beaches with lots of privacy. If you want room service, you send a flag up your flagpole. We had a drink in the bar but decided against eating there after we looked at the prices. We weren't suffering on the boat as I'd provisioned with filet mignons for several meals (with bernaise sauce no less).
We took the dinghy over to Petite Martinique and walked around the community, very local and no tourist development at all. The inhabitants live by boatbuilding, seafaring, and fishing. In the old days, says our guide, they were also smugglers. Children were playing dominos, a variation where you slap down the domino when you play it - a lively scene. Other men were untangling fishing nets and mending them. 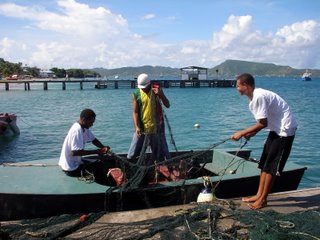 We sailed next over to Morpion, a low sand island with a thatch shelter that sometimes gets washed away. Actually it's amazing that it's there at all. At high tide there is almost nothing above water, but it's a beautiful spot - my photo doesn't do it justice. We snorkeled and swam there but when we tried to pull up the anchor we found it was wound around a rock and we were stuck. Scott got his air tank and hookah out and tried to go down and untangle us but the air hose wasn't long enough. He could have tried to do it using the dinghy but meanwhile good Samaratins from a nearby catamarin in full scuba gear came to our rescue and in just a few minites we were free. 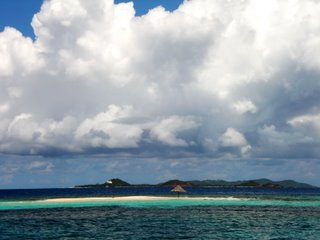 Our next stop was Clifton Harbour, Union Island with a what looked like a tricky entrance surrounded by reefs. It turned out not to be that difficult as there were channel markers and the reefs themselves was very obvious in the clear water. We were all tired from too much sun (and Scott had gone through a lot diving the stuck anchor) so we went out to dinner that night at the West Indies Restaurant and had a terrific French Creole meal.
Posted by Scott Garren and Heather Shay at 12:20 PM