James' Visit - Thanksgiving and a visit to a Pirate Lair

This was the first Thanksgiving we had on the boat but it couldn't be other than traditional for me. So we had a whole small turkey, stuffing, mashed potatoes, squash, cranberry sauce, salad, and apple pie - all made with two burners and a small oven (our generator is on the blitz, which means no microwave). I believe the turkey was the last one in any of the islands. All of our other friends here went out to dinner but I've never been to a restaurant for Thanksgiving (yet). It was a rainy stormy day so we sat around the boat, playing cards, backgammon and dominos. James and I particularly had running games for two weeks of gin and canasta. 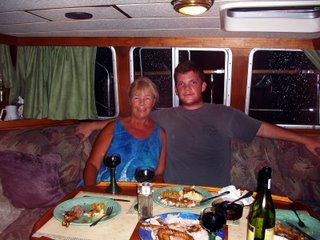 We had forgotten to check out of customs that day and so had to wait to leave until after they opened the next morning. With that late start we decided to stop in St. Vincent for the night. This is a beautiful island but has a bad reputation for theft. With it's steep and wild terrain, it was one of the last to be settled by Europeans. The Caribs (called so by Columbus) were in residence when a slave ship wrecked off the coast. They attempted to subjugate them and managed for a time but they revolted and took Carib women with them and formed a colony, calling themselves the Black Carib. They put up a fierce resistance to British settlement. Finally, in the late 18th century, they were defeated and shipped en masse to Honduras. There are a lot of terrible deeds done in these islands for sure.
As soon as you approach, island men in very small row boats come out to "help" you anchor. These "boat boys" are only trying to make a living but they've put off many cruisers from coming. We refused assistance until we were close to the moorings and realized we needed help with our stern line. So we chose Sean. The anchorage area is small and everyone wants to be close to each other and the restaurant for security purposes, so you take a mooring and then have a stern line tied to either another mooring or the shore.
The harbor of Wallilabou has much more recently been famous as the principal location for "Pirates of the Caribbean". Much of the stage set is still intact and the restaurant was remodeled for the movie as well. We had a lovely lunch there under the Styrofoam and plywood arches, painted to look like stone. After we had sat down our (boat boy not our youngest son) Sean came to our table and asked to borrow our dinghy to bring the police out to the large catamaran near us. Their dinghy motor had been stolen the night before. Needless to say we locked everything down tight that evening. We have dinghy davits and can bring our dinghy up each night and tie it down well.
Before that though we motored out to the natural arch at the end of the bay and snorkeled around the rocks. There was a wide variety of fish and colored vegetation. Early the next morning, 6:30AM, we took off for St. Lucia and as there was very little wind, motorsailed the whole way - 55 miles. Luckily we had a very positive current with us and pulled into the Rodney Bay Marina by 3:30PM. It was James' birthday and after perusing the guide book, he decided on "Razzamatz" for dinner. This was a terrific traditional Indian restaurant and they sang a rousing Happy Birthday afterwards.
Posted by Scott Garren and Heather Shay at 6:52 AM

It is important to note that this, "Sean" was not me. But I am glad to hear that the Seans of the world are helping you guys out! Next time, maybe it will be me!