We have been looking forward to having Scott's brother Brent and our sister in law Wilma on the boat again for years. They visited us in New England when we first bought the boat and then many years later for a wonderful time in Curacao and Bonaire (see blog posts earlier). Wilma has come successfully through some health issues and was fit and ready for fun times again on Scott Free.
We left almost immediately for the outer reefs and the beautiful island of Ranguana. We enjoyed snorkeling, swimming and a romantic
dinner on the tiny Cay. Our friends Desiree and Denby were on their once a month week off and Desiree's neice Natasha cooked a very good coconut milk fish dinner with roasted veggies and coconut rice.
Unfortunately Wilma caught a cold on the plane trip down and although she didn't complain a bit, it slowed her down for a few days. We decided to return to Placencia not only to pick up some medicine but to arrange some diving for Brent and Scott.
They had 2 great days with Sea Horse Divers right at the main dock. There were two dives each day with lunch in between. And they were great, right on the reef. They saw turtles, sharks, rays, lots of fish and a variety of coral.
Brent particularly liked the fish cleaning area where the sharks and rays fed on the remains of the fisherman's catch. And the dives on the reef wall where the bottom was too far below to see. Wilma and I had fun too, shopping and a great lunch at De Thatch on the beach.
Our last day we booked a day with Eagle Ray Tours to the Jaguar preserve at Cockscomb Basin Reserve, about an hour north of Placencia. It was just us four and our guide. We left at 8:30 and hiked in the morning up a steep and strenuous trail to the top of a ridge. It was a tough climb and we were happy to rest on the occasional benches provided. It was supposed to only be an hour and end in a waterfall but we hiked more than an hour and a half and never saw the promised water let alone the fall. We hadn't planned such a long trip and didn't have much water. It was another hour and more before we got back to the park headquarters. They had packed a good lunch which we all appreciated and afterwards we got our reward with a few hours drifting down a lovely river on tubes - Yeh! Happily Brent had an underwater camera and took photos of this and his scuba trips with Scott.
On the way back we stopped at a Mayan village gift shop for while and then had an unscheduled stop on the side of the road with an empty radiator. Luckily we had some full water bottles. We did make it back to Placencia in time to clean up and change for a wonderful last meal at the Rumfish restaurant.
We were sorry to say good-bye to Brent and Wilma the next day. They were just getting their sea legs! 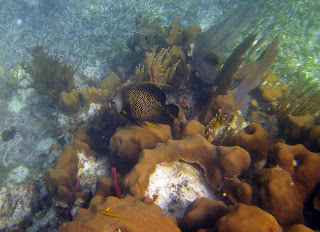 Posted by Scott Garren and Heather Shay at 8:41 AM