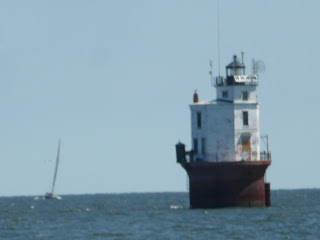 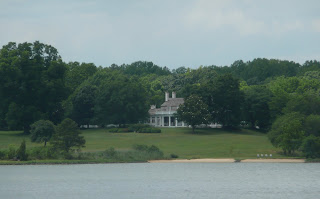 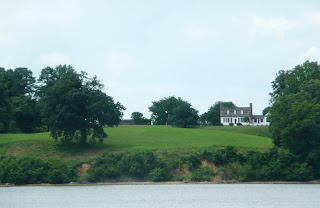 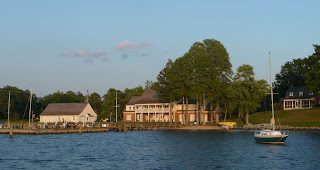 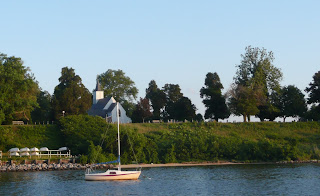 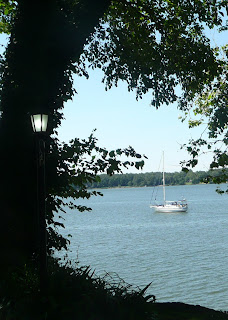 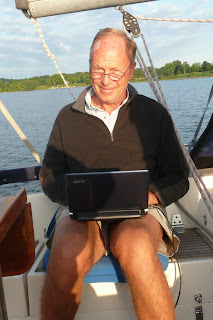 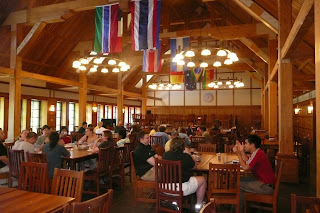 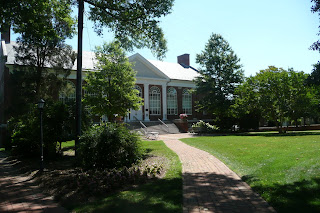 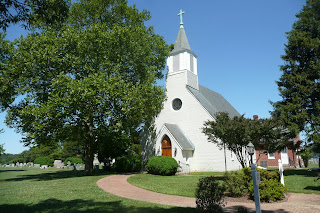 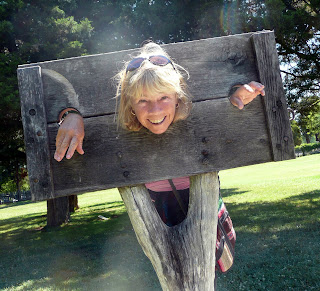 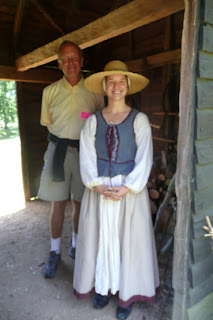 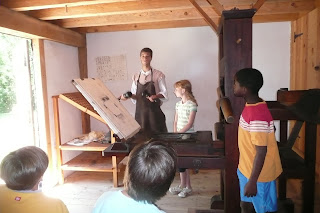 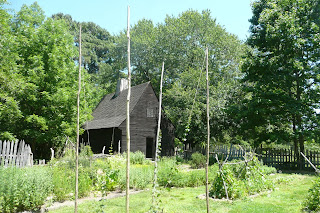 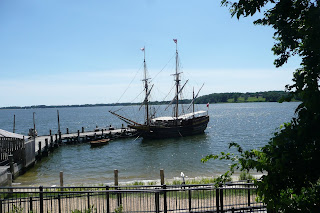 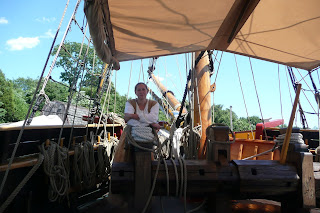 We're in the Chesapeake and even more amazing finally going up the Potomac River to Washington DC. Yesterday June 6 we left Deltaville at 7 AM in choppy seas and directly into the wind. Turning around Smith Point (that's the light house shown here) was a great relief as both wind and seas died down as we crossed the mouth of the Potomac and promptly left it to sail up the St. Mary's River to anchor for the night.
The banks of the river boast some beautiful homes with lawns down to the water. We turned a corner and perfect protected Horseshoe Bend harbor welcomed us after a long day. The view from our boat is so lovely. The waterfront has a huge handsome boat house named after the donor Teddy Turner IV, a gracious home, huge brick College buildings, a white historic church, gardens and an old cemetary. Several shots show this lovely spot below and to the right.
Quickly after anchoring we went ashore to take a walk and explore. The historic recreation of the city of St. Mary's was not open on Monday so we decided right then and there to spend two nights here and have a day to really explore this beautiful "museum" and the lovely St. Mary's University. That's Scott Free at anchor below right.
It was such a quiet evening and cold. Since the northern front moved through the heat is gone. We are wearing our fleeces and sleeping with a blanket! It's rather nice really!
Next morning after our long hours of coffee (I with my book or Killer Sudoku and Scott on the computer - great WIFI right off a college campus) and breakfast, we were off for a day learning American history. St. Mary's was the first capital of Maryland Colony, founded in 1634 by the brother of Lord Baltimore. These were Catholics who were no longer comfortable in England and their charter is the first to guarantee Religious freedom in the Americas. It flourished until the capital was moved to Annapolis and then it faded away, built over or destroyed. The Catholic ownership of Maryland also perished along with the right to religious freedom in a revolution to install Protestant leadership.
It was reconstructed and opened as a National Historic Landmark and museum. It is one of America's best preserved archaeological sites. Digs were ongoing in several places still. And it is a beautiful spot! Situated on high bluffs overlooking the river which almost circles the area.
The museum shares this spot with St. Mary's University, a public honors college, and a historic Episcopalian Church and rectory. It's hard to believe that this sleepy quiet spot is host to the largest yacht race in the Eastern U.S. in August - 300 to 400 boats sail overnight from Annapolis. This is followed by a famous party! Right now only one other boat shares our perfect anchorage!
We left our dinghy at the boathouse. The staff there are very nice. It is usually quiet but a group of local kids came down for an hour in the afternoon of swimming and boating. In the morning a solitary sculler came out with his coach along in a small motor boat. The campus is really beautiful with gracious older brick buildings and newer but very well integrated facilities, all surrounded by gardens and lawns.
Our tickets for the museum were $8 for seniors. This is a lot like Plymouth Plantation or Williamsburg - bigger than the former, smaller than the latter. It has a staff that interpret the history or pose as colonists.
We enjoyed some of the presentations for the school kids - the staff really involve the children in the presentations. That's the Colonial printer shown here using two children to print a poster on the antique press.
They have a reconstructed ship called the "Dove" after one of the two ships that originally brought the first Europeans and a typical Indian village of that time. This is very well done and it is interesting that unlike the other settlements, the colonists used the Indian dwellings for their first months until there own homes were contructed.
Lunch was a big treat. The college cafeteria is open to the public and for only $7.25 each it was an all you could eat buffet. Nice! We took advantage of this as most sailors will. The food was good and it was a lovely spot. That's the eating hall above.
There are five miles of walking trails around the property. We walked all of it, seeing the Tobacco Plantation, first Inn, Printer office and the diggings. By 3:30 PM we were exhausted. But it was a great time. We hope more cruisers will come up here!!! Tomorrow we're continuing up the Potomac. It's 90 miles still to Washington so we'll spend two more nights on the trip and be in our capital by Friday.
Posted by Scott Garren and Heather Shay at 4:14 PM

Email ThisBlogThis!Share to TwitterShare to FacebookShare to Pinterest
Labels: Maryland