We decided to use the full weekend when our kids and their friends had off to move the boat from the Capital Yacht Club in Washington DC to Herrington Harbor North Marina in Deale, MD - Scott Free's home for the summer. This meant traveling overnight on Friday down the Potomoc! We set off in high spirits at 6:30 PM with James, Morgen, Sean and Piper on board.
We ate dinner and watched the shore lines and passing boats until dark. I took the first watch although Sean and Piper stayed up and kept me company. They took  the second watch, followed by James and Morgen, and lastly by Scott. Then the progression continued.
It's pretty scary at night motoring down the narrow channel. We had some close calls with unlighted buoys! It's hard to figure out the lights at times, especially around the bridges. It took two people. One really focused on the computer showing our position on the chart and the helmsmen watching carefully for traffic and navigation lights.
But we had great success - no bumps in the night! The next morning we were in the wide area of the river and it was much easier. We had beautiful clear weather with not a lot of wind.
Out of the river we headed up the Chesapeake Bay on the west side. Before we turned into our destination for that night, Solomon's Harbor, Sean came up with a brilliant idea.
"Why don't we put the sails up?" He had noticed that other boats seemed to be having a lot of fun. It just meant going a different direction (from where we were headed).
So we put them up and took off across the Bay. Lovely! We had a fun time playing in the waves until the thought of finding an anchorage for the night (and enjoying a sundowner or two) sounded appealing.
Solomon's was very crowded as always and our first anchoring spot didn't look as nice after the current changed. We reanchored later and spent a peaceful night. Mollie joined us in a rental car for dinner and the evening. Before that though, we took down the kyack and the kids took turns exploring in it and the dinghy 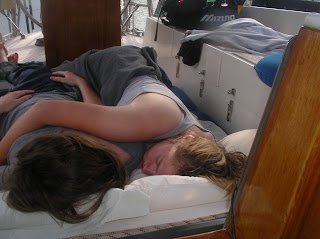 Piper and Mollie made a cozy bed in the cockpit! We had never slept so many people on the boat before. But everyone slept pretty well, especially after a big dinner and an overnight sail the night before.
The next morning we didn't rush. It was almost 11 AM before we started out the channel. We filled up the fuel tanks at a relatively cheap spot. Mollie and Piper had to leave us to drive the car around to our next destination.
The plan was to meet Morgen's dad near Herrington Harbor so that she could spend the rest of the day and evening with him and her sister. It was Father's Day. We almost missed him as we got such a late start. And we stopped to go swimming off the boat to cool off. That was a lot of fun! But we did manage to connect up and transfer her in the dinghy.
It was late coming up the narrow channel and almost low tide. We managed fine until we got halfway into our slip. And then we stopped, stuck in the mud. We managed to pull the boat over far enough to jump on and off with some difficulty.
Mollie and Piper met us and we said our goodbyes quickly as Sean and James needed to join them and drive back to Washington. Thoughtful Piper had bought us a new toaster! What a sweetheart!
Next morning at high tide we moved over to the slip way for the haulout and the next day they moved us on to the hard. "Scott Free" will stay here until we return in September. Till then, fare well!

Posted by Scott Garren and Heather Shay at 2:32 PM