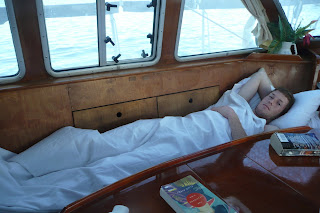 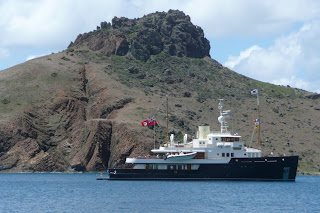 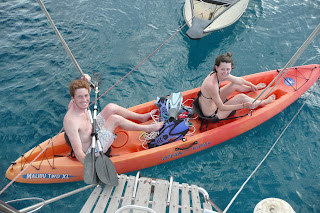 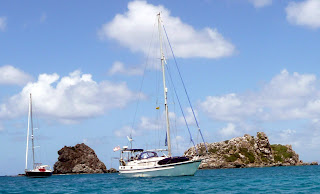 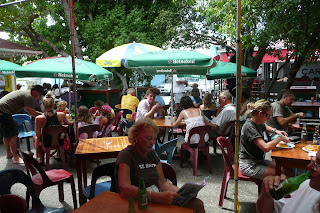 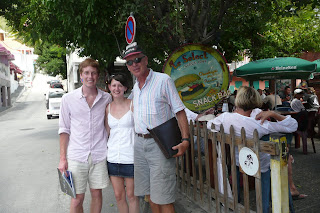 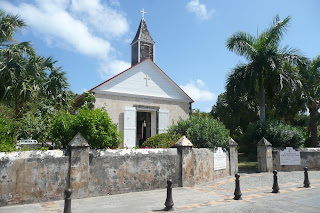 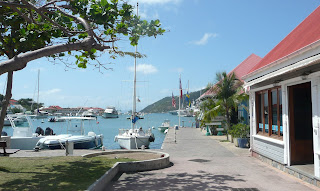 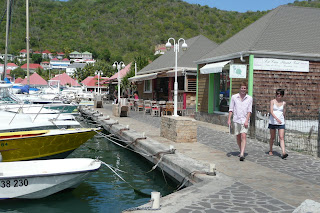 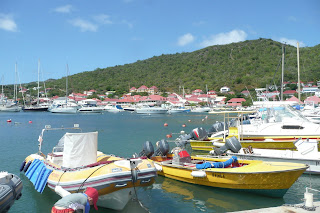 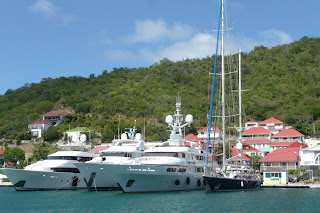 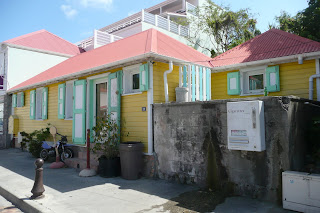 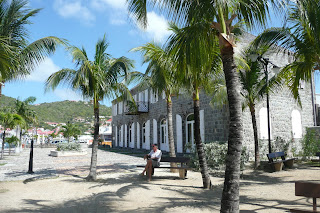 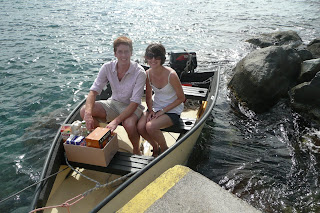 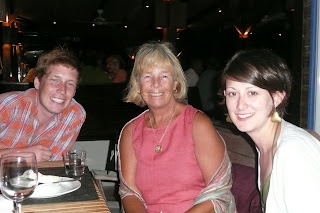 We were up early as all of us were anxious to see new territory. As you can see from the picture on the top, Sean is always one of the first ones awake (even though Scott and I really try to be quiet making our coffee) as he slept in the salon. Courtney however, being in the v-berth with a door, was able to sleep in a bit. There was plenty of wind to sail and it was a lovely trip down the coast of St. Martin, across the open water passage and into the beautiful harbor of Iles Forchue. This is part of a Marine Park and although the island is privately owned, our guide book assured us we could explore it. The only sign of development was a very small wooden shack near the beach. Only a few stunted trees were scattered over the main island. It was mostly rock, low buses and plants, and small wild flowers. There are about ten moorings for free here but the occasional super yacht is allowed to anchor in the center. You can see the terrain behind this comparatively small one shown here above right. Until recently, again according to our guide, this island was overrun by goats. So many in fact that they'd eaten everything in sight. Well since that time someone has removed the goats and the plants are making a great comeback.
The snorkeling was really nice along the rocky ends of the bay and the hiking great all over the island. This was also a good place to explore by kyack as you can see from the shot of Sean and Courtney here above.
We spent two nights relaxing in this remote spot before continuing on to the totally different sophisticated island of St. Bart's. Les Voiles de Saint-Barth regatta was ongoing while we were there so the harbor was jambed with big yachts of all kinds. We could see several of the off shore races while we moored in Isles Forchue - big boats with lots of crew (see the photo of one below). The inner harbor was of course full so after a tour around we anchored just outside off one of the picturesque craggy rocky islets that are scattered around (see the photo of Scott Free anchored between two of them above right)
As soon as we could get the dinghy launched we were all carefully packed together trying to avoid the salt spray (Sean got the worst of it) as we slowly motored into town. This is a great place to walk around and gawk - beautiful boats, houses, restaurants, shops and people. We had read about "The Select" as the place to see and be seen on the island but were rather surprised to find it a very unassuming place. It had a small inside bar and mostly outside tables & chairs. The menu too was very simple; mostly various forms of hamburgers, fish (sticks!),fries, salads etc. The price wasn't too bad but nothing fancy here. Still it was busy and some people looked vaguely like models (or former models). Others were busy playing backgammon or chess. You ordered at the counter and picked up your food when called. Two photos are shown of it above here on the left and right.
After lunch we walked all around the harbor. Courtney and Sean were taking us out to dinner that night so they checked out all the possibilities as we went. Sean had a long talk with the bar tender in one place and made arrangements for later. Then we did some provisioning in the very elegant grocery (that's some of the boxes with our food in the dinghy with Sean and Courtney) and headed back.
Dinner that night was very special. We got all spiffied up and carefully motored into the harbor around 7 PM. We were able to tie up our dinghy right at the restaurant and our table, per Sean's arrangements, was specially set up right at the water for us. It was a magical spot and a fantastic dinner! The owner came over to talk to us and we lingered over dessert and coffee.
The next day we had planned to spend a night at the north end of the island but it looked crowded so we all opted to return to the Isle Forchue. Sean and Scott went diving off the north end of the island. Sean and I did our PADI Open Water Course in Bonaire several years before and he hadn't had an opportunity to dive since. Luckily my wet suit and equipment fit him! He really enjoyed trying this again.
There were only two of us in the harbor that night under a sky packed with stars. The only surface lights were their anchor light and ours. Breakfast too was lovely watching the sun rise over the craggy hills.
We've of course been dining really well on board as well as those few meals on shore. Sean and Courtney made us some memorable meals as well. Scott made a lot of fresh bread and Sean became a master at concocting Rum Punches! But our idyllic vacation was coming to a close all too soon. We had one more night in the Lagoon at St. Martin before they had to fly home. It was a sad to say farewell but we hope they are back again soon! 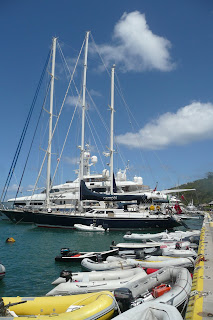 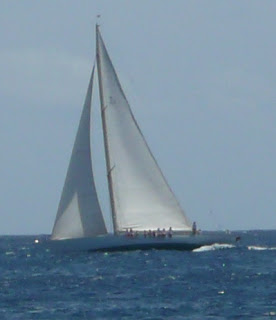 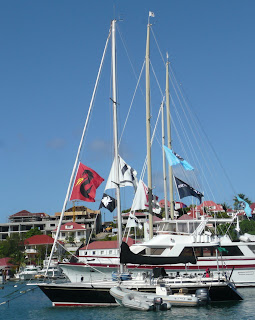 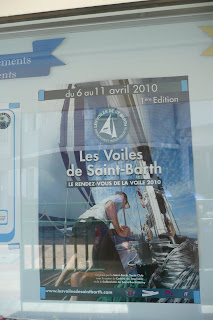 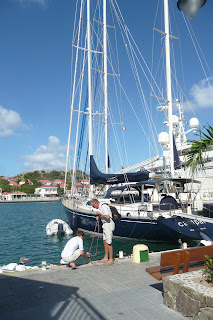 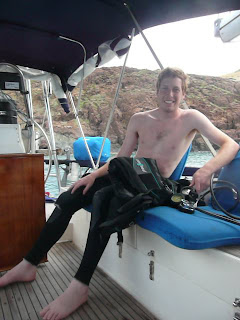 Posted by Scott Garren and Heather Shay at 7:46 AM