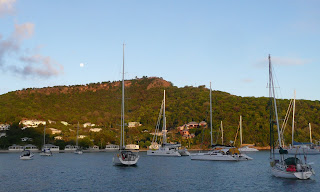 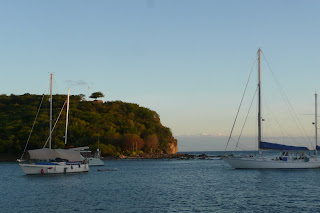 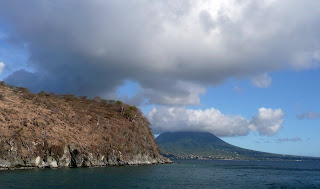 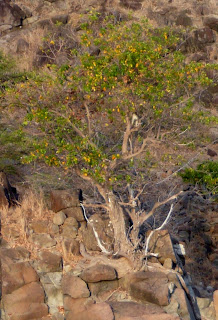 We left Deshais, Guadeloupe very early in the morning for the trip to Antigua. It was a really nice sail and great to have the engine off totally for a change. We had hoped to go to Montserrat but the volcano danger level was up and the wind dirction and force prohibited a comfortable anchorage at the island's only "bay". So for the second time we've missed visiting this unusual island! Last time it blew up while when we were only 20 miles away on route for a visit there (see blog entry May 2006).
So instead of an overnight passage down to St. Martin we decided to do three long day trips. The first night we anchored at English Harbor, Antigua near the entrance. This is a beautiful spot but pretty crowded. We were just off the entrance channel but in sight of two old English forts. The top two photos show first looking east to Freeman's Bay with the moon already in the sky and the second looking south to Charlotte's Point.
We stopped in Antigua unexpectedly when that volcano blew and stayed at Jolly Harbor further north and west. We took the bus to English Harbor and walked all around. It's an impressive historic sight and quite charming. We were sorry not to have more time here this time.
The next morning we left early and had another great sail to St. Kitts, arriving at the south end and with good light for The Narrows, the passage between it and Nevis. We anchored in Major's Bay, the only boat. Their is a car ferry dock at the end which closed down early and after that there were no lights or development in sight. We sat quietly and watched the light change as the sun started to set. That's a photo at that time looking past the east point of the bay to Nevis in the distance. Then a movement caught my eye on the shore. At first I thought it was a group of goats - BUT oh no, it was monkeys! A good size group of monkeys passed down the slope, along the water, stopping to play in one of the few trees, and then out towards the point. We watched entranced for over an hour. We had no idea that monkeys were wild on St. Kitts. Cool! I took a bunch of photos but it's really hard to pick out the monkeys. The one shot here shows at least one of them clearly up in the tree.
It was a quiet beautiful night with a full moon and a pretty morning as well. We had another all day sail to St. Martin, arriving late in the day. We anchored outside the lagoon entrance at Simpson Bay and although their was quite a bit of swell, slept pretty well. We're really looking forward to seeing our old friends Ed and Linda on "Dreamtime" and having our youngest son Sean and his friend Courtney visit. More on that in the next blog entry.
Posted by Scott Garren and Heather Shay at 2:20 PM