On August 22 we left Boston behind and made our second trip through the Cape Cod Canal. We did it at night. I was at the wheel, Scott below sleeping, when I turned the boat around the markers and headed up the channel, looming rock jetties on each side. The bright lights lining the canal blinded me and as I started under the first bridge I suddenly realized a huge tanker was coming right at me. Wow! Did my boat turn on a dime and head for the edge! Luckily it's pretty deep close to.
We were headed for Mattapoisett again, this time to pick up Sean and friend Caitlin for a cruise. This is a wide pretty bay with free moorings from the boatyard. The next morning we sailed up the south coast of the Cape and flew through Woods Hole Cut. The currents here are extremely strong and it's necessary to plan your passage through here at close to slack tide. We were a little late. There are a lot of channels here near the mouth of the harbor and it was confusing but we made it through.
It's a short sail across to Martha's Vineyard. We moored again in Oak Bluffs. It was more fun this time as we were a bit more experienced. This is a tight harbor with packed in boats.
We rented bikes and explored. Sean and I spent a great vacation here many years ago and one of our fondest memories was jumping off the bridge over an inlet along the beach. We did it again - still fun! Edgartown is a beautiful town with great restaurants and we love walking through the cottage community at Oak Bluffs.
After a few days there, we left and as we did with the Korbeys the year before, we stopped at Tarpaulin Cove in the Elizabeth Islands to swim and eat and then continued to Cuttyhunk Harbor for the night. This has been a favorite place of ours for years.
We came here twice on a friend's boat and Scott and James spent a weekend here once fishing. We only had one night as Caitlin needed to get home so we returned to Mattapoisett to let her off. Sean continued with us towards Newport R.I. but we ran into bad weather. The wind was directly in front with gusts up to 30 knots. It was VERY uncomfortable and after hours of crashing into the waves, I suggested we just turn to port and spend another night at Cuttyhunk. Relief! Amazing what a difference it was on a reach with the sails up! It was wonderful to pick up a mooring and relax.
We left early the next day and it was thrill to sail into Newport Harbor! This has always been a favorite place but we've never been on a boat here, let alone our own. Sean took a bus home and after two nights we headed on down the Long Island Sound. We had a reservation at the Noank Yacht Club for ten days. We needed to take Sean up to Dartmouth and get him settled. Scott had some work to do, we wanted to visit Scott's father Mitchell and we needed to close up Vermont.
When we arrived at 5 PM, no one knew we were coming. The man Scott talked to during the summer had left and evidently didn't tell anyone. Everyone was so nice. They insisted we tie up to the dock for the night and they'd figure it out. By morning we had a mooring, Paul Taylor's for the next eight nights. We could only get to the mooring at high tide and I think we had little to nothing under us at low tide. Luckily the bottom was mud. During the week a hurricane brushed by off shore and it was really rough. I was on board alone for the day and very nervous. Paul came out with two heavy anchors to reinforce the mooring. We couldn't thank him enough - and he refused any compensation. 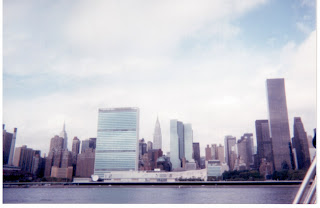 We anchored next at N. Fisher's Point, Saybrook on the Connecticut River and then again at Milford. Leslie Smith's college roommate's mother and husband, Mike and Sandy Madigan, invited us to use their mooring at Bell Island, off South Beach, near Norwalk. We ended up staying in their home for two nights. They were great hosts and had a beautiful home there.
Our last anchorage in Long Island Sound was off City Island. There is a yacht club here although we haven't gone ashore. It is necessary to time your passage down the East River the next morning from the Sound to the Harbor through Hell's Gate. Well named we hear, although we carefully planned our three passages through it (two others the following year) and had no problems. The first part was a peaceful and interesting trip past the Maritime Academy and under the Long Island bridges we'd been over hundreds of times by car. Then the positive current swept us down the river, faster and faster. We were around Hell's Gate bend and in a few minutes the United Nations Building gleamed in the sun - seen here behind me. It was a thrill to see the Manhattan and Brooklyn bridges from the underside!
Our oldest son Josh lived for many years in a loft on the river, which we saluted as we passed. The current slowed after we went around the tip of Manhattan and we had it against us slightly going up the Hudson. We stayed on a mooring at the 79th Street Boathouse, a few miles up. The currents on the river make it quite challenging at times getting on and off the boat but it's an amazing place. For only $40 a night we were fifty feet from the shore and let's say, 1000 meters from Zabar's Deli. We love New York and this was a thrill. There is even a charming cafe and FREE laundry facilities at the Boathouse!
We left the boat on the mooring for two nights while we visited Brent and Wilma, Scott's brother and his wife. We even participated in a labor rally in Atlantic City with them. He's Chief Counsel for UNITE.

When we got back we found our dinghy, tied up to the docks, filled with debris and barely floating. There had been a storm during our time away. It was a huge job pulling it up on the dock and cleaning it. Disgusting!!!
We left NYC in the very early morning before dawn. It was a thrill to sail past the Statue of Liberty and out into the crowded harbor, under the Tappan Zee Bridge and out to sea. We planned to visit our friends on "Sea Angel" at Brielle Marine Basin at the Manasquan Inlet for one night. The weather was lovely for a sail down the N.J. coast and the entrance easy into the inlet. Once in we passed under the railroad bridge and docked at the Brielle Marine Basin marina. Ed was there to tie up our lines and take us out to lunch. His wife Benia was unfortunately away.

The next morning we had to leave in the dark. We called the bridge attendant before casting off our lines and waited for the bridge to open. It was pretty frightening for us newbies to navigate out the inlet in the dark - a first, for sure. But we had a long trip ahead of us, down the rest of the NJ coast to Cape May. We wanted to be safely anchored there before dark. We came in through the Inlet from the Atlantic and anchored near the Coast Guard Station.
We could not exit via the Cape May Canal out to the Delaware due to fixed 55' bridges so we made another before dawn exit back out the Inlet and carefully made our way through the complicated channels around the Cape and up the Delaware.
Posted by Scott Garren and Heather Shay at 1:04 PM