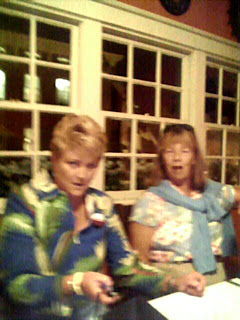 Our first stop in the Chesapeake was the 2004 Nauticat Rally on the river up to Baltimore at a Yacht Club. It was three days of talks, seminars and socializing. We met a number of Nauticat owners we knew from our first Rally in Beaufort, NC before we bought "Scott Free", and met many more. One of the nicest events was touring all the other boats; 33's, 44's and our own 43's.
We had been to the boat show many times in the past but this was our first one on our boat. It is necessary to arrive days or even a week in advance to get a good anchoring spot and unfortunately we came the day before. So we joined many other boats off the Naval Academy in a very exposed anchorage. The SSCA GAM was the next day and our first time there. We met up with our friends from the Maine GAM and had a fun dinner in town - that's Leslie Sturzenberger and myself here.
The GAM itself was really fun and informative. We met two couples there that would become fast friends. Geoff and Jo on "Sutton Hoo", and Francoise and Roger on "Starship Annie". We ended up eating dinner together that night and then they came over to our boat another night. We really hit it off. Francoise and Roger (below left) cruised with us a number of times in the future - this coming winter/spring in the Bahamas to start. And Geoff and Jo made plans right then and there to accept our invitation to visit us in Vermont that winter. They spent 10 days with us and it was fantastic. This photo of the four of us was taken at Okemo in February, 2005.
We had a big list of items we wanted to buy at the boat show. It took several days to get through all the vendors and of course, to look at the new boats. Kai and Tula were there from the Nauticat Boatyard in Finland and we were lucky to spend time with Kai going over the design of our boat and construction details. We had some windy wet weather and the efficiency of our anchor was tested and found adequate. Several other boats were not so lucky.
We love watching the amusing show put on by the departing boats the last night. A line of catamarins did 360 degree circles while exiting the channel to loud applause and cheers. The next day we were off across the bay to do some exploring. We went up the Choptank, visited Cambridge and Oxford, funny to have them near each other in this country, then St. Michaels - not the main entrance but the back
way up the Choptank and San Domingo Creek. "Starship Annie" was there but Francoise was really sick with a flu so we didn't see them.
During our four days there we weathered a storm with wind in the 40 knot range. It was very protected so we felt quite secure, but were battened down by heavy rain. We tried leaving the Choptank and heading south the next day but were turned back by wind and waves right on the nose. After waiting another night with winds up to 41 knots, it settled down to 33 knots and we were able to make it out of the River. When we turned south it was better and we were able to make it across the Chesapeake to Solomon's. Back creek there was really packed with boats but we managed to find a place to anchor up Mill Creek. 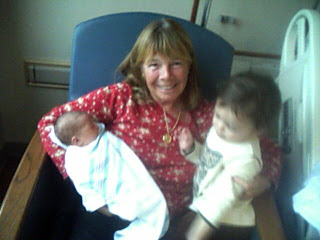 The next day we were off again, across the turbulent Potomic and down to Deltaville. Our six and a half foot depth was iffy for the main entrance so we took the exciting and circuituitus southern entrance to Jackson Creek. We bumped the bottom three times on the way in. The channel comes so close to the beach that we strayed a little too far off. Our adrenaline was racing. Once in it was a lovely spot. We turned right into Northern Creek and anchored off the Deltaville Marina at Jackson Creek. Our friends Lee and Sherry from "Alessto" were there working on their boat. We had them over for drinks. 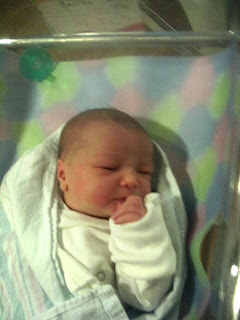 The next day we borrowed bicycles from the marina and biked into town for lunch and some shopping. After a quiet second night worried about the trip out that channel the next morning, we were lucky to follow close behind another boat and this time had no problems.
Our next stop was Norfork/Portsmouth. We had reservations at a Ocean Marine marina. Coming into these huge and busy city complexes was awe inspiring for us. Our boat was dwarfed by giant freighters and air craft carriers. It was a challenge following the channel and keeping to it's edges. Happily the marina was very nice and we left the next day to fly home for the birth of Josh's second child. That's Arielle finding her thumb and she and Daniel with me at the hospital.
Posted by Scott Garren and Heather Shay at 12:08 PM