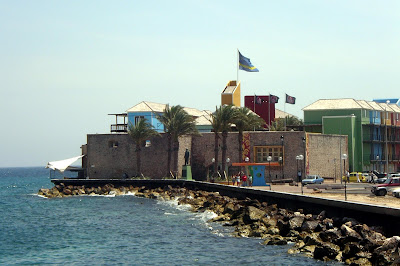 Scott and I rarely splurge on a expensive restaurant but when we saw the white sail canopies (seen on the far left in the picture here) of "Bistro Le Clochard" we threw the budget to the wind. The restaurant's terrace is visible from the floating Emma bridge which crosses the narrow channel entrance of Williamsted harbour. It is tucked into Fort Rif and the rooms are within the 19th Century vaulting of the old Dutch fort guarding one side of the entrance. 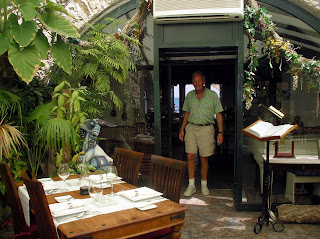 The entrance is into a lovely greenhouse but we were headed for the dramatic tables overlooking the water. The waves were crashing against the walls of the fort and some of the tables were not available as a result - we got a dry location with an amazing view. Not long after our arrival two tugs exited the harbor and then proceeded to escort a huge freighter right past us. 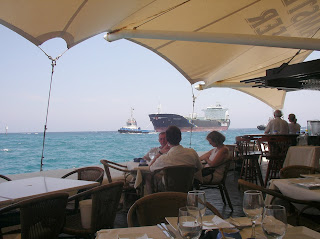 We watched as the bridge slowly opened. The end of the bridge has two giant outboard motors; they power the 16 floating pontoon boats and the bridge above them in a semi circle, ending up parallel to the shore. This was built in 1888 and was recently overhauled and restored. While it is out of service free ferries called "ponchi" take passengers over the channel for free. 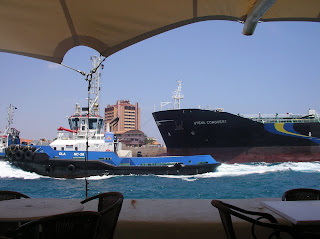 The food was terrific too - French and Swiss. We even treated ourselves to a beautifully arranged dessert of local strawberries and cream. That's one portion shown in the picture! After that Scott and I had to take a long walk around the city - hardly a difficult task. 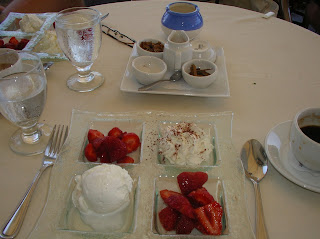 Shopping is a big pastime in Willemstad - all the traditional European and American higher end chains are represented. Our favorite however was the local markets and outdoor craft artisans.
Posted by Scott Garren and Heather Shay at 11:12 AM