Our second major hike was a combination of that and canyoning. We hiked up to the top of a series of gorges where the Guapo River descends from the mountains and followed the river down. We waded, swam, floated and jumped. It was a lot of fun. 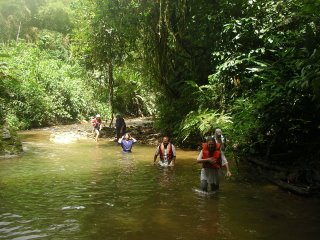 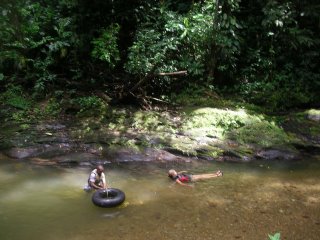 But we had all been very nervous before starting this trip. Jesse and our guide Snake had warned us in advance that this was a very strenuous trip and might be canceled at any time. These gorges are steep and through many parts it is impossible to get to higher ground, so a flash flood could be pretty dangerous. The heavy rain on the way up the trail added to our anxiety. But when we reached the river the water level was down and the sun came out. Snake gave us the go ahead and we were off. Our first obsticle was a narrow gap and drop into another pool. We had to jump the 12 feet down but land six feet out. We all did it but there were several big pauses and white faces afterwards. This is not Disneyland folks. 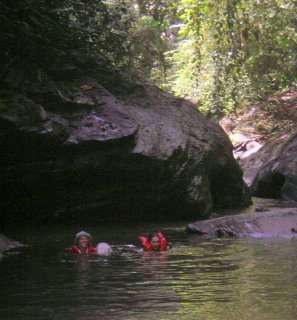 But we all had faith in Snake. He has done this many many times and he gave us all courage. Pretty soon we were hooting and hollaring. Lying on my back (we all wore life jackets) and floating down the stream was heavenly. The scenery was amazing and Jesse pointed out all the bird life around us. 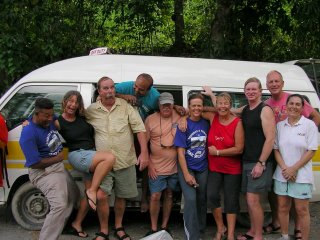 We had our lunches sitting in the sun by the side of the river - jumping in to cool off once in a while. Basically we spent most of the day wet. This is a good thing in a hot climate! It was a great group and lots of fun as our photo here indicates.

Posted by Scott Garren and Heather Shay at 7:34 AM