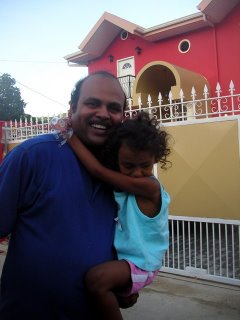 Jesse James is the best ambassador of goodwill that Trinidad could have. He runs all the tours and transportation for the cruising community here. His maxi taxis take us to the supermarkets and malls, music venues, movies and the sights around the island. We've gone on two really fun all day trips with him. 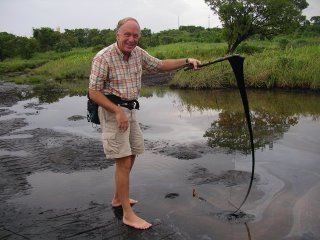 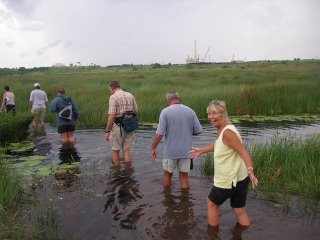 The first was to the Pitch Lake and stops at several Hindu temples. The Pitch Lake was described by Noel Coward as "Twenty two tennis courts badly in need of repair." Actually this million year old pit covers 89 acres and has been used by Sir Walter Raleigh and many since as a natural source of asphalt. Three hundred tons a day are removed from it and it is also a interesting tourist destination. Maxi taxis are overgrown vans that carry twelve people in somewhat cramped conditions. The drive down to the lake was along the industrial west coast through San Fernando, the second largest town in Trinidad. We stopped after an hour to have some "doubles" - hot pita bread like rounds of fried dough stuffed with curried chickpeas. This is a popular breakfast snack here and stands with lines of people in the morning are common. A guide led us through the knee deep water onto the soft asphalt center of the lake. At one point we could lift up the warm pitch and watch it form ribbons off the sticks.

We stopped for lunch and had another Trinidad specialty, roti. Various curried meats or vegetables are wrapped in large squares of warm flat Indian bread. We had goat rotis with very cold local beer - Stag or Carib. Most rotis have bones in them so eating them is a little tricky but they are always delicious. Next we stopped at two Hindu temples. The first is a small temple on a piece of reclaimed land reachable by a narrow causeway. 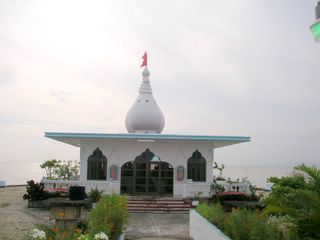 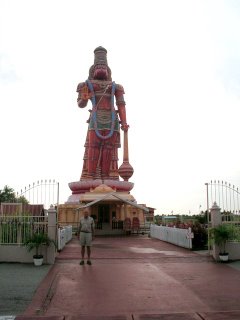 All of this and the temple itself were hand built by a inspired Indian (about half of Trinidadians are descended from workers brought from India in mid 1800s) forty years ago. The second was a very large complex of temple buildings and statues. This is used for many large weddings and other social gatherings. The largest statue is over 150 feet high. Twenty five percent of Trinidad is Hindu.
Posted by Scott Garren and Heather Shay at 12:35 PM