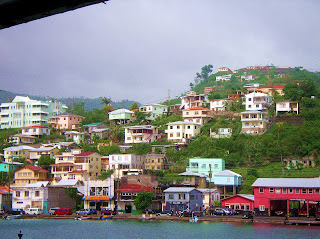 We had a wonderful sail from Carriacou down the east coast of Grenada on June 16th. We anchored in Prickly Bay off a lovely beach. Our friends and ourselves rented cars and spent a day touring the island. Grenada is a lush and hilly island and grows most of the world's nutmeg along with many other spices. We visited an organic chocolate factory powered by solar panels and a traditional rum 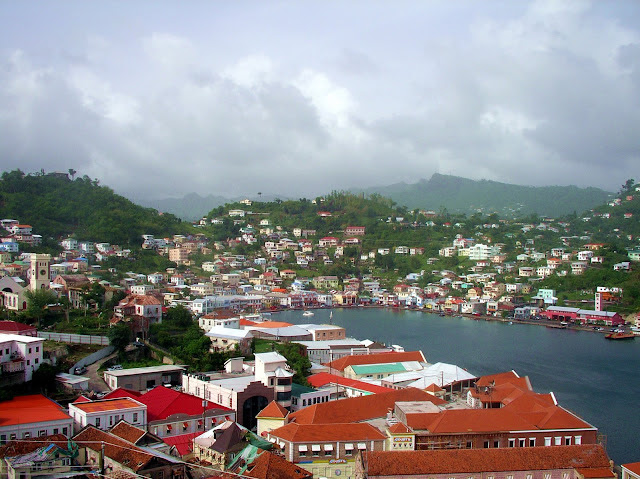 distillery. Our guide book had recommended a beautiful restaurant at the north end of the island but when we finally found it, it wasn't in service. I guess we should have realized there was something wrong when we couldn't find any signs. Still we toured the grounds and took pictures. We pulled into a very small local eatery starved to death and happily surprised the cook/owner by ordering eight full meals. The whole family got into rustling us up some food. 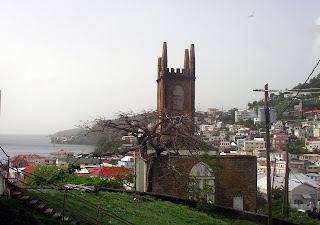 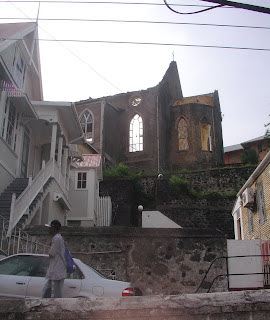 The capital St. George is built on steep hills around a small protected harbour lined with stone quays and fishing boats. Grenada was hit by two Hurricanes in a row after fifty years without one and suffered greatly. We saw lots of signs of recovery but there is still much destruction. The three large churches on top of the hills in town still lack roofs. I've included a series of photos showing some of the damage. At the bottom a forlorn couple sit in a charming little house with no roof or windows..We were so impressed with this lovely island and its' people that six of us decided to fly back from Trinidad in August for the Carnival. We made reservations at a small motel right on the parade route. 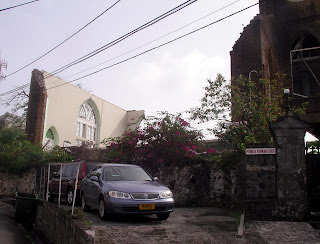 At 6PM we sailed off south for an overnight trip to Trinidad. It was a squally night and there were a lot of big ships moving around the channel from the off shore oil rigs so it was quite stressful. Scott and I didn't get much rest. That next morning, 4.5 miles from the Boca Channel and the Trinidad coast, we collided with a small fishing boat. This was the worst experience of our trip so far (hope nothing comes that tops it). 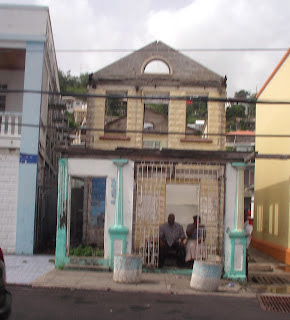 The visibility was poor with 6 ft rollers, there was a 2.5 knot current sweeping us sideways (so we were going a different way than it looked) and the fisherman's outboard was not working. Luckily no one was hurt and we were able to tow the boat into Trinidad with us. That's he and his 22' boat below with Scott in the dinghy when we brought him back.

Chaguaramas Bay where we checked into customs and our marina, Crew's Inn, was a major base for us during the last world war and over 30, 000 Americans used to live here. There were major shipyards among other facilities. It is now a national park, which aims at combining park areas with eco-friendly economic activities. We were pleasantly surprised at how pretty the bay is - densely vegetated hills on three sides and a group of small islands on the other. It had been a long night and day since we'd left Grenada and we were relieved to be tied up at the dock at the marina about 7 PM
We only had a few days before flying back to the States for five weeks visiting family and friends. We met with a number of contractors and took our sails down to be cleaned and repaired. Roland and Kathleen on "M'Lady Kathleen" had volunteered to keep an eye on our boat 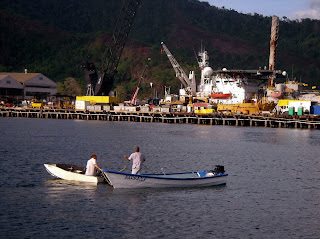 while we were gone and security is excellent at the marina so we left feeling comfortable. Our visit home was wonderful but rushed by so quickly. Still we got to see almost everyone, our three sons, Scott's dad and brother, and my sister - plus of course all our closest friends. Highlights included a big Fourth of July weekend in Vermont and a trip down to Washington DC. We flew out to California for the last week to see our daughter Zoe and family and then flew back directly from there. When we return home in December we will have two more grandchildren - Josh and Michal are having their third, another daughter, and Zoe and George are having their second, another son.
Posted by Scott Garren and Heather Shay at 12:05 PM