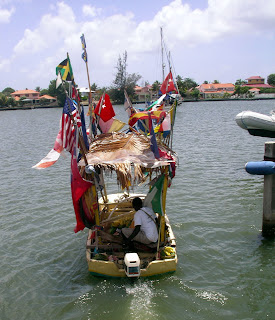 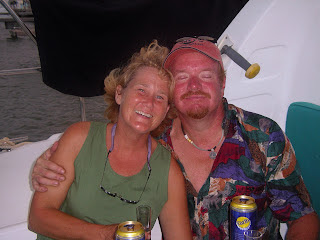 Scott and I left Anse Mitan, Martinique at 5 AM, before the sunrise but with good light. Our friends on "Que Rico" had overslept (seen here the night before!) so we circled them and beeped the horn until they appeared. With the music and fireworks going till 4 am ashore, no one got a good night, but it wasn't long before we saw their sails behind us. It was calm until we left the lee of the island and entered the channel. We had 15 - 20 knots of wind and 5 - 8 foot swells both from the east. This wasn't that bad as we were on a beam reach, a very comfortable point of sail, and the swells were far enough apart and regular so our boat mainly rose and fell with the waves - altogether a nice brisk sail - and a short one as we tied up to the marina at 10:15 AM.
The Rodney Bay Marina in St. Lucia is a very inexpensive but nice place to spend some time. A colorful flag draped boat cruises the harbor each morning with fresh vegetables and fruits - very convienent! A tropical wave was coming through the next few days bringing gusty winds and rain (we clocked 38 knots max during it) and it was nice to be tied up to a dock. It had a pool which we used everyday, several nice restaurants, a good book exchange, and a laundry service. Do it yourself laundries haven't existed since the U.S. Virgin Islands. We drop off our laundry and get it back all folded, for a mostly reasonable price - about $8 a load. 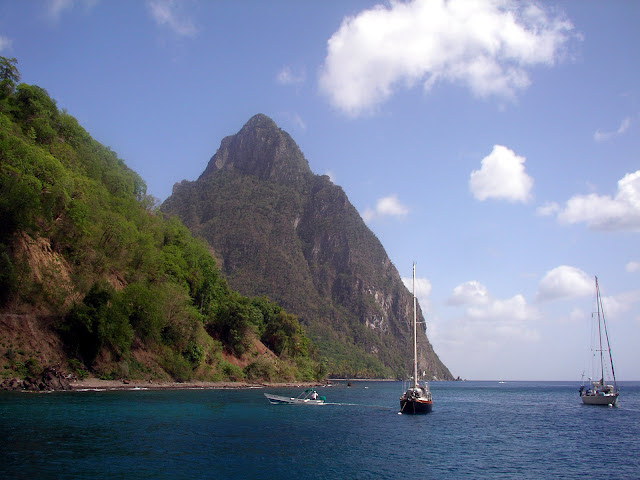 There were a lot of boats here that we knew, including "Lioness III", another boat we left Georgetown with and hadn't seen since April 4. We had a big pot luck at the pool one night and exchanged visits with another Nauticat 43 "Woodfield II" John and Dee King from England - a delightful couple that gave us lots of information and advice about the countries ahead of us. They've been in the Caribbean for 17 years and were headed back to the Med this summer.
After two nights at the Marina we left at 10:15 AM for an easy sail down to Soufriere Town in the south of St. Lucia. 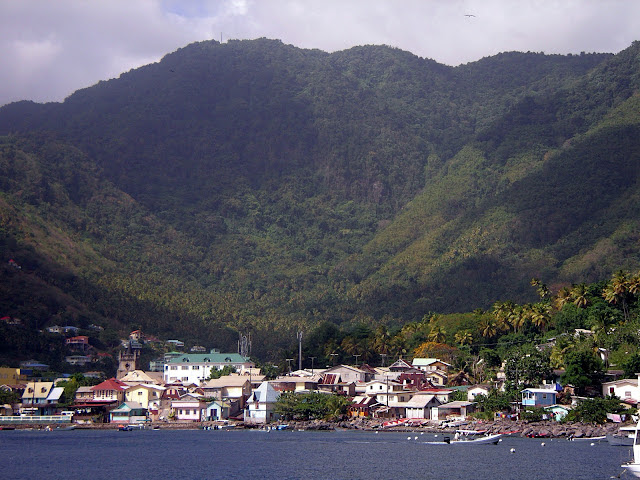 We picked up moorings off the beach in the shadow of Petit Piton, one of two dramatic towering thin mountains that rise up directly from the sea here, both around 2500 feet. We had a lovely early dinner and wine sitting in our cockpit with the wonderful view and sunset. We went right to bed afterwards because at 3 AM all five boats dropped our moorings and headed out to sea, the still visibly looming pitons against the stars. It was windy and rough again in the channel but the boat handled so well, under reefed sails but averaging over 7 knots - 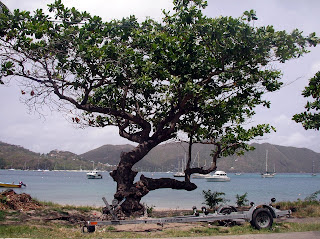 very exhilarating. We had to turn the motor on for a while in the lee of St. Vincent as the wind alternated between howling through the mountain passes and dead calm when directly behind them. By this time it was light out and we enjoyed the beautiful green coast of the island. Next fall we will stop there and see it but now we have to make tracks. Once into the next channel the waves were wild again but the wind steadier. We had been warned to take our sails down before entering Admiralty Bay in Bequia gusts of wind up to 38 knots hit us as we rounded Devil's Table.
Due to this, we spent a bit of time anchoring and made sure we were well dug in. This lovely big bay is surrounded by white beaches and a charming red roofed town, Port Elizabeth (view from the town). We were off Princess 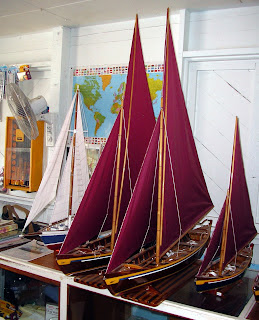 Margaret Beach among many boats. This is a popular spot for cruisers. We found our friends Luis and Natalia from "Vagamundo" here and spent the next day with them. We had breakfast at a small cafe and then walked up to the fort for a beautiful view followed by an exploration of the town. Several craft artists have studios and shops here. One makes beautiful boat models, shown here. Our friends from "Dreamtime" arrived and came over for the evening. We won't see these two boats and "Diesel Duck" until we return in August to Trinidad because we need to make tracks south. We have plane reservations home in late June from Trinidad.
Posted by Scott Garren and Heather Shay at 6:16 PM