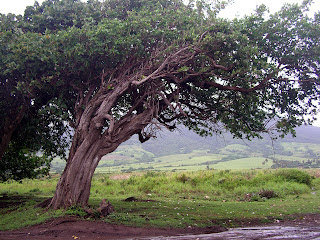 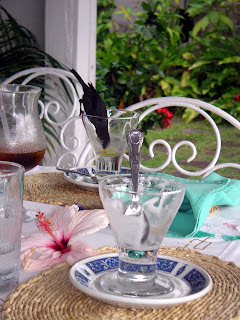 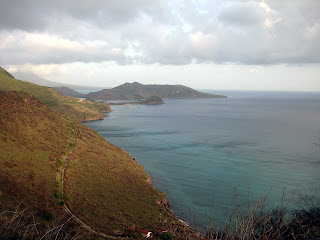 Our next destinations, St. Kitts and Nevis, are an independent state with a British tradition and 50,000 inhabitants (Saba has 1500 and Statia 2700 in contrast). The anchorage at St. Kitts was too open to the waves so we stayed in the marina there for three nights. This was a nice change and we enjoyed plugging in and using our air conditioning. 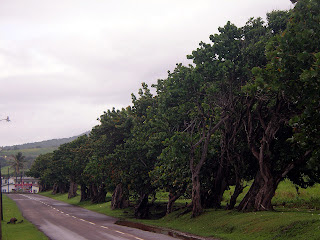 We've anchored all but a few days since our return March 1. That night three boats came over for drinks in our cockpit; two that we've been traveling with off and on; Dreamtime and September Song (they have a 15 month old son, Matis) and a couple we just met, Gretchen and Frank on Infinity. The next day was Mother's Day and it was so wonderful to talk to all four of our children! Luckily our "international" cell phone was working for a change! 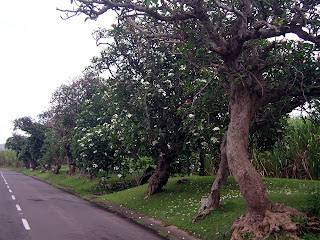 St. Kitts has a steep central mountain range rising 3750 feet high but the land, covered with sugar cane plantations, now mostly charming Inns, slopes up gradually from the sea. We rented a car on Monday and drove all around this lovely island - on the left side of the road. Rows of gnarly trees line many of them, leaning away from the sea winds. Two pictures illustrate this, better seen by double clicking on the photos. Brimstone Hill Fortress, a World Heritage Site, is a enormous series of fortifications built on a old volcanic eruption which rises straight out of the sea. This reminded me of the Tolkien's City of Gondor - a series of walled terraced fortifications with the road twisting up and through deep arched gates. 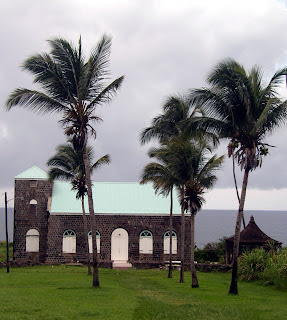 One thousand British soldiers held out for some months against eight thousand French there, surrendering eventually with full honors. The fort is being painstakingly restored and is already in great shape. While we were there a tropical downpour occurred cooling everything off nicely.
We also visited two lovely old plantation locations. The first Romney Manor was once the home of Jefferson's great grandfather and although the old manor house has burned down, it is now home to Caribelle Batiks and their charming workshops are scattered in the beautifully landscaped gardens where we saw some of the monkeys which populate this island. The second, Rawlins 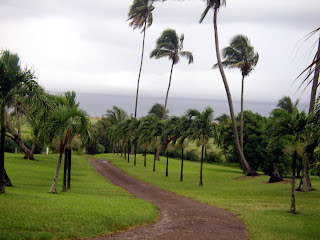 Plantation Inn, appears like magic after a long narrow card track between fields of sugar cane in a wonderful oasis of lawn, trees and flowers. We had a West Indian buffet lunch sitting on their veranda with a view of the sea and in the distance, Statia.
As each diner completed their luncheon, the birds moved in for the last dregs of the drinks! After that we met the present descendant of the past owners, Philip Walwyn, a renowned yachtsmen who is building a First Rule Twelve Metre - a class of boat used for the America's Cup from 1958 to 1987. It is the only one to be built since 1917 and gorgeous. . 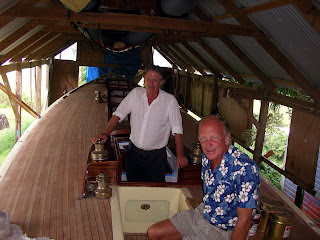 His wife, Kate Spencer, is a wonderful artist and her studio and shop is in their home. The boat is being built out in the yard. We really enjoyed her work and bought a signed numbered print of hers.

After the necessary and with the car, easier, tasks of laundry and shopping, we drove down the lovely but almost deserted south end of the island. Newly constructed roads over the hillsides indicate that next time we visit this island, new homes will have sprouted up. We returned the car this morning, checked out with customs and now we're off to Nevis.

Posted by Scott Garren and Heather Shay at 5:52 PM