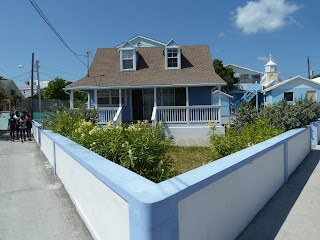 Green Turtle Cay is only 3 miles long and 1/2 mile wide but it's a perfect example of a Bahamian island. Although it was founded by Loyalists fleeing the Revolutionary War, it has been more comfortably biracial than many other originally all white islands. So it is perfect that they celebrate their African roots in this festival, their 8th annual.
New Plymouth is the small village on the island and it's pristine and charming - a bit like a New England fishing village (think Cape Cod but colorful). The Abacos in general are a conservative religious people but unlike Spanish Wells, this island isn't dry. 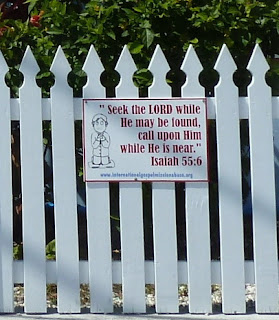 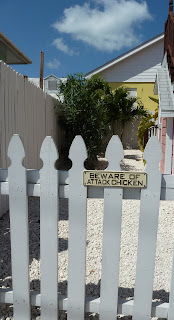 Our boats were at anchor in Marsh Harbor and Green Turtle Cay was a day's trip away so we rented a car and drove down to the ferry at Treasure Cay. It's a short hop over to Green Turtle Cay for $25 round trip. Julie and Peter had never been there before so we first walked around the town admiring the pristine, charming cottages that line the narrow streets. There are two different museums and a sculpture garden - a lot of cultural richness for a very small community.
Unfortunately it was mid day and hot so we ducked into a tiny cafe-bar at the end of the main street for a cold beer and shared conch fritters - yummy.
The festival was at full swing when we arrived. Tents and booths were set up on the peninsula park at the end of the town. There were lots of activities for kids both outdoor and craft types (costume pasting, conch horn and cowbell lessons), supervised by movie type looking pirates in high spirits. The history of Juckanoo was detailed in one tent with lots of actual costumes to admire.
Vendors in smaller tents sold art, jewelry and crafts of many types, all from Abaco artists. Other tents provided the food and drinks. We carefully checked out all the food purveyors before choosing our plates. Everything was good and in big portions.

The Royal Bahamas Police Force Marching Band put on a great show. They did precision marching with a lot of south of the U.S. border steps. Leopard skin like coverings draped over some of their uniforms. The baton weilding leader was very dashing and fun to watch. Hopefully I'm going to figure out how to get our movie of this incorporated here. For some reason we're having problems - check back later. 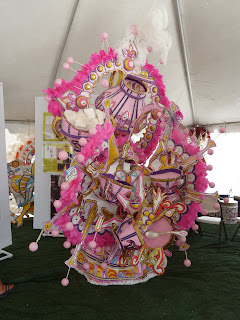 As we watch the band the clouds began darkening and rolling in ominously. Luckily the storm waited to break until after they were finished. We ran towards the church where a series of lectures were being held and just made it. We heard Jeffrey Poitier talk on "How Bahamians shaped South Florida". Key West is New Plymouth's sister city and in 1830 a large group left New Plymouth to settle in the Keys. As late as 1912 60% of the residents of Key West were Bahamian!
We were sorry to only hear the end of the previous talk on archaeological findings in the Bahamas, South Florida and the surrounding Caribbean islands.
The rain had cleared off when we emerged but we were ready to head home. Once back on Great Abaco we stopped to tour the community at Treasure Cay. Once a separate island, the land filled in over time. This is a big resort with hotels, condos, large number of homes, restaurants, a marina and golf course. The beach has been rated by some as one of the best in the world - sorry not to be able to report as we didn't see it!


Once back in Marsh Harbor we did some shopping and headed back to our dinghies, tied up at Snappa's. Of course it was necessary to have a few drinks there to express our thanks for the dingy dock. The night before we had enjoyed their free appetizers on Friday night at Happy Hour - meatballs and chicken wings. Fun place, good food, friendly service, and overlooking the water.
We enjoyed the view of the boats tied up to the dock and have to share a picture of our favorite couple - a typical cruiser with cat (and dog) enjoying their sundowners. 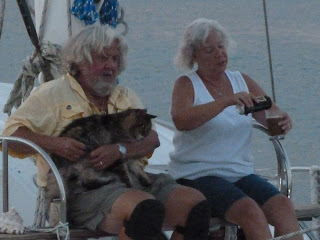 Posted by Scott Garren and Heather Shay at 8:16 AM

Email ThisBlogThis!Share to TwitterShare to FacebookShare to Pinterest
Labels: Bahamas