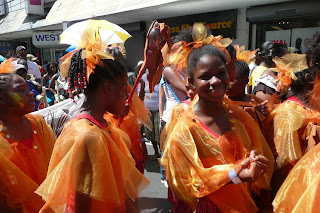 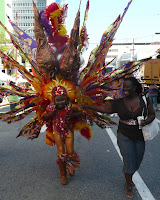 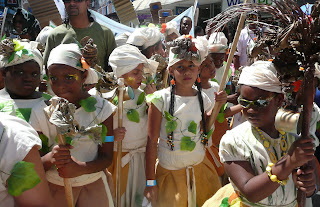 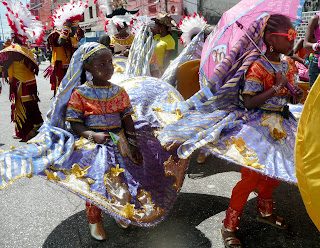 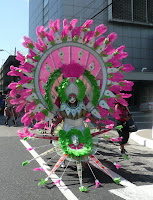 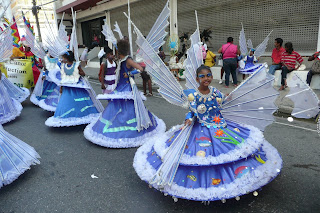 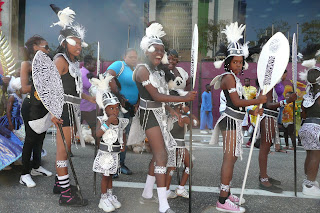 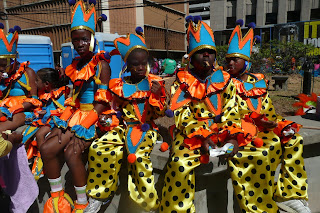 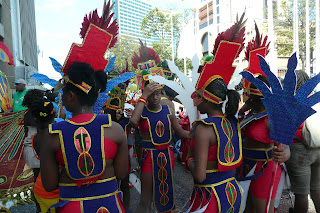 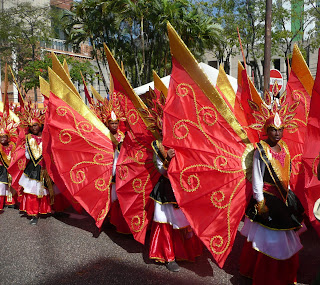 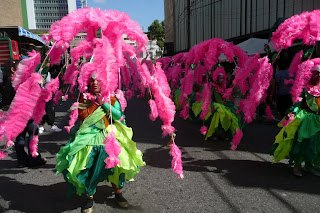 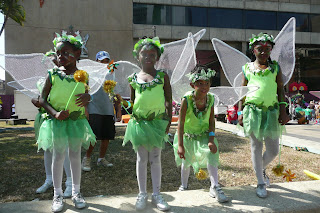 First of all, let me say that this Carnival is so amazing that I'm posting many of photos here in their smallest size so I can include more. Please double click on them so you can see the details and enjoy the children's expressions. The creativity and variety of the costumes can only be suggested here. 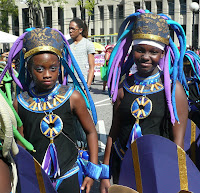 Thousands of children participated and almost as many adults. The parade route was jammed with spectators. This is repeated the next day!!! I'm dividing this posting into two with mainly photos in the second posting. This of course when I can get an internet connection strong enough to upload pictures!

The Junior Parade of Bands in Trinidad is on both Saturday and Sunday. Junior means up to 15 years old. There is no beginning age limit. Toddlers of two and three marched in the parade and some babies, dressed in costume, were wheeled in prams.

The Junior King and Queen candidates compete in three earlier evening sessions along with the Senior Kings and Queens. They are usually among the older children and the sturdiest as the costumes are heavy and enormous. Some of the King costumes were more than 20 feet high and wide. The rest of the participants are everychild, with all the family members attached. Fathers,mothers, older siblings and grandparents are sometimes alongside. 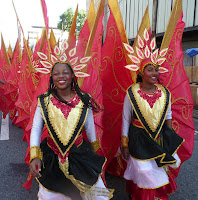 They attache the elaborate costumes, paint the children's bodies, and support their progress through the parade. It's a long day starting at 9:00 AM and continuing into the late afternoon. The parade route is over 3 miles and the sun is hot. 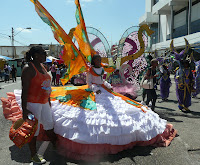 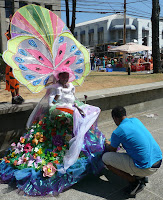 There are food, drinks and cold treats available throughout, free. The kids appeared to be eating or munching every moment, except in front of the judges. Then they coalesced into somewhat organized dance groups. It was fascinating watching the "coaches" showing the kids the dance moves. The occasional child that got it had "rhythm - plus focus". Tough and rare combination. 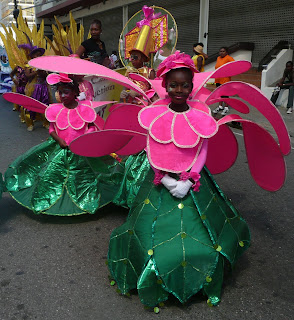 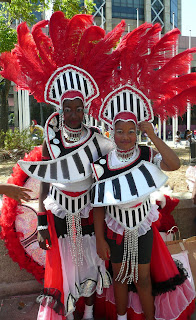 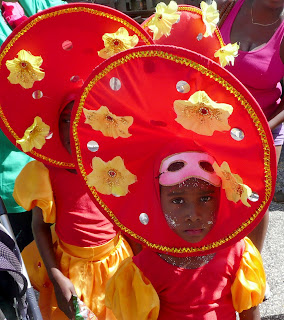 The general divisions are among youth groups, both geographical and organizational. Each chooses a theme. These are mostly traditional, folkloric, historic or musical. A King and Queen lead the group, followed by sub groups within the general theme. Even within the subgroups costumes may vary some, depending on age and choice. All of these costumes are made by hand. 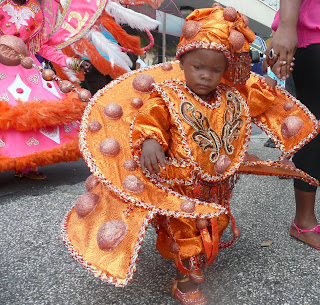 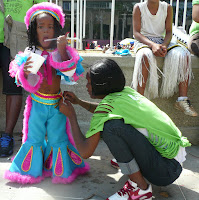 Artists specialize in this area and spend their lives designing Carnival costumes. Mothers and occasionally fathers do the actual sewing or I suppose have them sewn (see the photo with the father mending his daughter's costume above). There are a disproportionate amount of girls in the parade. 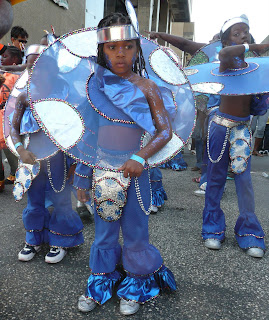 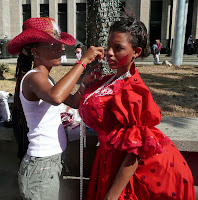 Probably only 25% are boys and most of them younger. The few that remain are promenent. The King candidates for example were pretty hardy. The top contenders were forced to carry some pretty big loads. I saw several on portable seats or just hunched over, trying to cope. It was a windy day, especially down by the waterfront.
Posted by Scott Garren and Heather Shay at 6:53 PM