Diving and Partying in Bonaire! 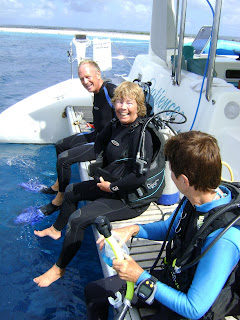 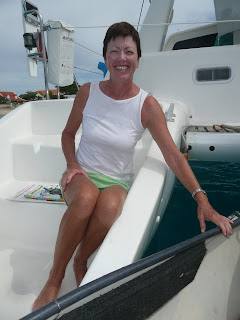 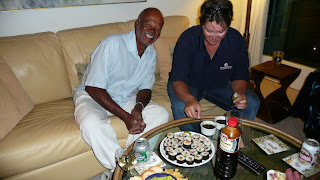 First let us celebrate the election of our new President!!! Yeh!!! We sent our absentee ballots in from Cartagena - two of the many many votes for President Elect Barak Obama. How we love saying that. We watched the returns at Bob and Barbara Gilmore's home in Bonaire with friends Andrew & Kerri on "Mariposa" and Ellen & Cal on "Patience". 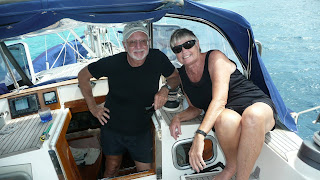 It was midnight Bonaire time when the California polls closed and they finally confirmed what we all already knew. We were all fiercely partisan - even Kerri (New Zealand) and Andrew (Britain and South Africa). Barbara brought out the noisemakers and we screamed and yelled out on their balconey over the waterfront!
We were particularily excited about the wins in Colorado and Virginia as that's where Sean worked so hard. It was wonderful to talk to him that night and congratulate him! Barbara and Bob were perfect hosts (that's them above right on our boat) - the food was fabulous and champagne to celebrate. Two of the culinery hits of the evening was the sushi Kerry made (shown here with Cal above right) and Barbara's sausage and egg breakfast casserole after Obama's inspiring acceptence speech. 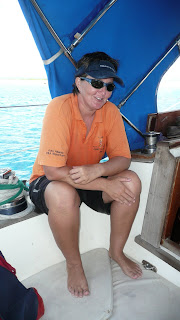 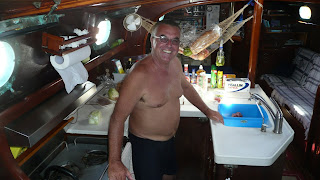 "Mariposa" was our neighbor on the moorings and we did a lot of diving with them. Kerri is a PADI instructor and has a compressor on her boat. She sailed with three young inexperienced crew over from South Africa and her boyfriend Andrew joined her in the Caribbean for the remainder of the cruise. They are delightful and we were very sorry to see them sail off east for Grenada a few days ago. Happily we hope to see them again in Panama next year as they too are considering departing across the Pacific in early 2010. That's Kerri above and Andrew in their galley. 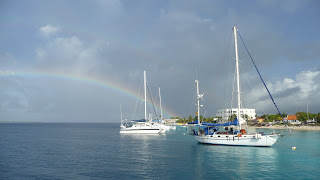 The rules have recently changed to allow boats up to 45' use the dive moorings so we and Mariposa, their friends "Blue Water Cat" and "Patience" (that's Ellen above and ourselves on Patience at the top of the page) all took turns bringing our boats out for dives and lunch. Most memorably we did a dive on the wreck "Helma Hooker" and a night dive. The former was a medium sized freighter at about 85 feet and my first wreck dive. The lurking huge silver tarpons inside and under the freighter were the same ones that followed us so closely at night. I'd catch a glimpse of movement near me and see them practically touching my side! They are looking for prey in our flashlight's beam. When we inadvertently spotlight one they gulp it down whole.
Kerri certified Andrew and myself for our PADI Advanced Night Dive. That involved reading the appropriate material and taking a test, then practicing some skills underwater - such as a simple navigation exercise (not quite as simple in the dark!). Scott already has his Advance Diver Certification. I'll need four more advance dives before I finish it. 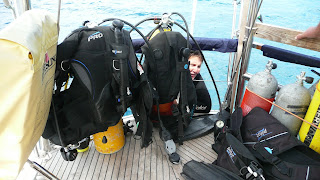 Diving takes a lot of equipment. We've been collecting pieces for the last year and now have everything for the two of us. Well, except for a dive computer - a big loss as far as Scott is concerned. It is possible to work out the needed information with dive tables and a dive watch but not as accurate and, of course, not as much fun. We now have two of each; BCDs (Boyancy jacket), a main regulator and a secondary safety one with an "octopus" to connect them, full insulated dive suit, booties & hood, tank (one big and one smaller - we still come out with the same amount of air left as I use less) and weights (Scott's on a belt and mine integrated in the BCD). This all costs and arm and a leg but will last a long time. 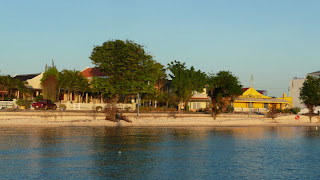 Bonaire is one of the premier diving centers in the world. They created a Marine Park that surrounds the island and protects the reefs. Boats can not anchor but permenant moorings are installed all along the protected western shore. A small island called Klein Bonaire lies off that coast and is surrounded by dive moorings. Other dive only moorings line the north west and south west coasts. In between are 40 moorings for cruisers, $10 a night. They are only 100 feet from shore - the view here is the walkway and road across from our mooring. The second picture above left is looking from our boat north. That's "Mariposa" next to us. We often have rainbows after the usually short lived showers!,
Posted by Scott Garren and Heather Shay at 12:17 PM