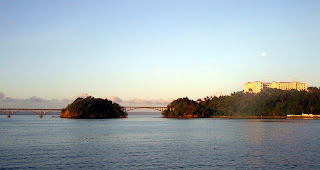 We left Luperon Thursday night April 13 in marginal conditions with our friends Ed and Linda on "Dreamtime" around 5:30 PM with northeast swells around 5 - 6 ft. and NE winds 10 knots. We were able to keep the main up most of the night and the waves moderated as the night went on. The winds shifted more to the west by morning and we were downwind sailing as we approached Escondido where we had thought to anchor. We had made such good time that it was only 8 AM and we talked it over after speaking to Chris and decided to go directly to Samana. The cliffs of Cabron were so beautiful and the scenery down the east coast lovely. Added to that, after making the turn south, we were on a beam reach and of course that's a sailor's definition of perfect. Jurassic Park was filmed in this area and it does look like that. 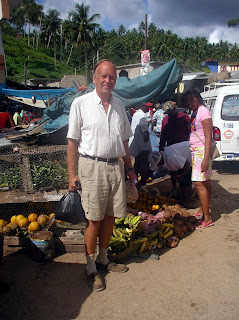 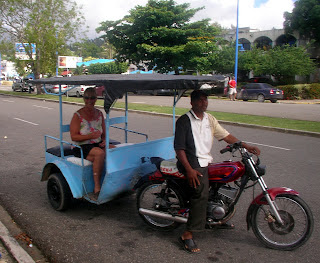 We anchored in Samana Bay at 3 PM and were almost immediately boarded by four men; the "Harbor master" who spoke very good English, the assistant commandant, and two other "officials". They asked for drinks (we gave them fruit juice and soda) and tips. There is a $15 port fee. The harbor master came back out with another "dispachio" and receipt for the $15. We were very annoyed by the whole process but talking about it together with other boats we learned a lot from the experience.

We thought the harbor was very pretty with lots of room to anchor. 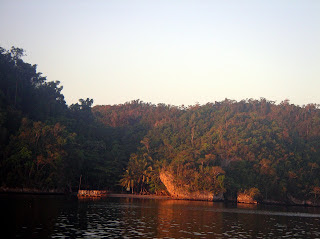 Steep hills with multi color homes surround the anchorage on two sides and on the other was a long footbridge connecting a series of islands. We took our dinghy in the next morning and hired a motorcycle with two person carriage to take us to the market. He waited and took us back. The open air market was really interesting and we got some vegetables and fruit. We took a nice walk along the harbor too. A boy "watched" our dinghy for a small tip.

We sailed across the bay to Los Haites National Park at Bahia San Lorenzo and that was a really beautiful location. This was one of our trip highlights so far. The anchorage was gorgeous and unique. 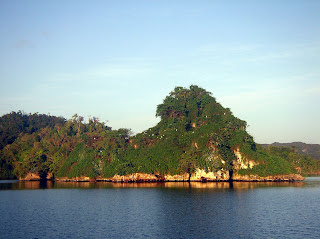 Lumpy green hills with caves and cliffs line the bay. Our guide book said it was as similar to Bora Bora as you can get in this hemisphere. A ranger hut with one official who comes in by boat each day is on a small beach. There are interesting caves nearby that he took us through which were extensive and had Taino Indian carvings. 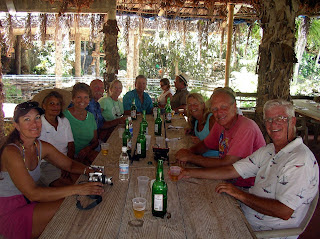 The next day all six of the boats in the anchorage took our dinghies up the narrow (at times only 12 feet across) winding Rio Chiquita, an amazing and lovely trip, to the end. This felt a bit like a Disney ride but much prettier and without the animatronic animal figures. There is a substantial dock to leave the dinghies with an armed guard, then we walked to Paraiso Cano Hondo, a eco-resort with a series of little waterfalls made from a stream diverted throughout the facility. 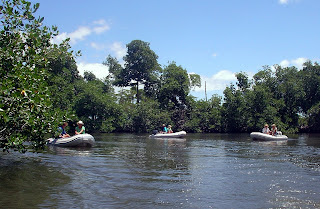 As it was Easter Day lots of families were spending the day here swimming in the pools. We wished we had worn our suits. The food was good. You chose your meat/fish and then the side dishes came family style. Natural materials are used very artistically in the construction and the twelve of us had a great lunch. We met the owner, a Cuban American from NJ who has a ranch nearby. 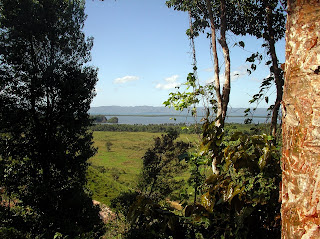 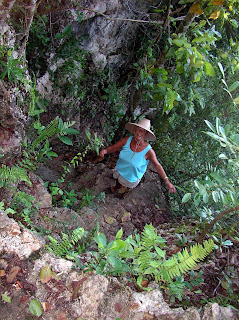 After lunch there we climbed a steep path and staircase up the mountain behind the last hotel units to a pretty view. The construction of all this is amazing. We all agreed that this was what cruising was all about!

The other four boats left on Monday night but another boat we're traveling with, "Diesel Duck", and ourselves waited for the light and variable conditions on Tuesday to cross the dreaded Mona Passage. Monday was my birthday and Benno and Marlene came over with some fabulous food for a celebration.

Posted by Scott Garren and Heather Shay at 11:55 AM